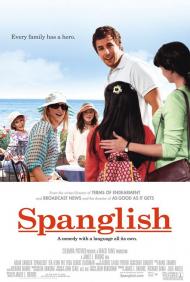 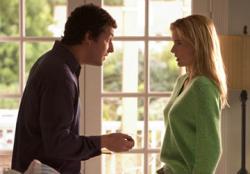 Spanglish is the latest relationship drama from writer/director James Brooks. It has some likable moments, decent acting, and a few harmless laughs. Unfortunately it tries way too earnestly to wring an emotional response from the audience.

The story involves the relationship between two different families. One is a mother and daughter newly immigrated from Mexico and the other is a yuppie couple with a daughter and son and live-in grandmother. This last character is played hilariously by the great Cloris Leachman. Her lush of a grandmother gets most of the movies' laughs.

Adam Sandler, in another attempt at drama, proves that he can be serious but somehow still seems to be playing the same slightly befuddled character as in his comedies.

Although Spanglish really wants to be a great movie it left me thinking "So what." 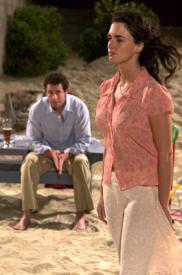 Patrick's right when he says that there are some likable moments in this movie. In fact, it's as if writer/director James L. Brooks is trying so hard to make his characters likable that they are in fact quite detestable. Only Tea Leoni's Deborah and Cloris Leachman's Evelyn are anything but completely and sickeningly sweet. The two leads, Sandler and Vega are so nice as to be practically inhuman.

As for Sandler, while watching him play the sad sack chef, at first seems as if he's doing a great job of acting, but really, it's just so-so. It's only because it's Sandler, and he's not doing his usual doofus role that he seems to be doing a great acting job. Only with his 'serious' portrayal, Sandler loses all of his charm. Instead of being the likable loser, he's the perfect father and gentlemen and very, very boring.

In Brooks' last film, As Good as it Gets, Jack Nicholson was an extremely nasty and very human lead character. In this movie, his counterpart is Tea Leoni; only this time the nasty character is reduced to the supporting role. While Vega and Sandler play the leads and neither of them has a single fault, thus making them hard to relate to as human beings.

Mildly amusing, Spanglish is a failure in every other way. 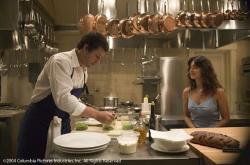 Scott and Patrick did not get this movie. John and Flor are very human. John is an introvert who is scared to confront his wife. He is shown to be a good father but not much of a husband. Flor is an illegal alien. She has pride and is very insecure about what John and Deb give her daughter.

John and Flor "get" each other. Both worry about their own children, or as John put it, "Worrying about your kids is sanity, and being that sane can drive you nuts." The movie shows a lot of Flor's relationship with her daughter. I wish it showed more of John with his kids. John's daughter is an emotionally engaging character but gets little screen time. His son has such a small role that I wonder why his character was in the movie at all.

The point of Spanglish is that two people, who barely speak the same language, can understand each other in ways that other people, who do speak the same language, do not. John and Deb have been married for years but they have different parenting techniques. Deb runs while John cooks. Deb shops for their daughter while John works with her on her homework. When Deb has an orgasm, it has nothing to with John even being in the room, let alone underneath her. John and Flor are surrounded by people who do not understand them. Look how John acts at work. One girl flirts insistently while a guy is just using him as a ladder to success. John just wants to cook. Neither his wife nor coworkers understand him.

John and Flor communicate with sometimes few words. Note the scene where Flor tells John they should not drink Vodka so as to have a clear head. John does not ask why and Flor comments on him understanding why without asking.

Sure John and Flor are the good guys in the movie but I don't hold that against them. In fact, they only appear to be so nice because, as John puts it to Deb when she asks, "Are you really that much nicer than me?" He responds, "Well you really don't set the bar very high."