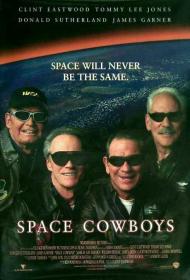 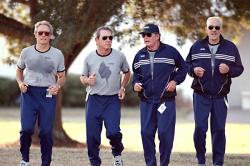 The first thing I heard about Space Cowboys was that Clint Eastwood was leery of appearing in it, because he thought no one would swallow the idea of senior citizens blasting into space. Supposedly, he only signed onto the film after John Glenn's trip into space was a success. I don't think he should have worried. The fact that the stars are senior citizens should have been the least of his worries in this predictable, overly long movie.

Space Cowboys tells the story of four test pilots from the fifties who were left out of the space program, but are now called upon to help repair a failing satellite whose technology, only they are qualified to fix. Clint Eastwood, who also directed this movie, plays the leader of the group who reunites the old team, consisting of Tommy Lee Jones, Donald Sutherland, and James Garner, for this one last chance to make it into space. Of course, not all is as it seems and of course, the clock is ticking, in more ways then one.

The main problem with this movie is the script, or at least the way it was edited together. It is filled with little inconsistencies and is very predictable. Within the first ten minutes I had guessed the secret of the satellite they were going to repair, and later in the film, when one of the astronauts is diagnosed with an illness, it is immediately apparent what he will do. As for inconsistencies, we go from a scene where the project manager is complaining about part of the story being leaked to the press, to a scene where the four stars are appearing on The Tonight Show, without an explanation or comment on the reversal. Near the end of the film, a final plan is made, they begin to execute it, and then go completely the opposite way, again without any real explanation.

There are however, some entertaining moments in this movie and the actors seem to be enjoying themselves, particularly Donald Sutherland. The scenes near the beginning of the movie where they are training for the mission contain the best moments, and some are nearly laugh out loud. And by casting four well known, and well-liked actors, Eastwood has insured that you will care about the characters. It is also a relief to see older actors playing their age, and some of the best jokes are the ones where the characters poke fun at themselves.

For every entertaining scene in this movie, however, there are two scenes, which aren't either necessary or entertaining. The subplot between Tommy Lee Jones and the female NASA Scientist should have been jettisoned in the editing room. And the opening scene, which takes place in the fifties, except for the cute fact of the young look-a-likes of the four stars, is completely unnecessary. 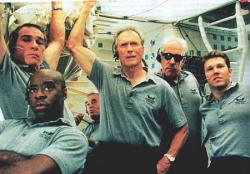 I enjoyed this movie. While it is certainly not without flaws, only about half of Scott's criticism's are accurate. I agree, first of all, with the fact that this movie is slightly too long and that the pacing is a step too leisurely. Likewise, there are a few uneven edits and the storyline is fairly predictable. With these flaws in mind, the good things which it has to offer still tip the scale enough for me to recommend it.

While I agree that Donald Sutherland is clearly having a ball as the dirty-old-man of the group, it is Tommy Lee Jones who gives the more outstanding performance. His good old boy with a heart of gold may be a cliché but it has rarely been done better. I found the sub-plot involving his romance to be quite touching, as well as a necessary part of the film's emotional integrity. Also, the introductory flashback which Scott complained about, was a good way of showing us these men as they were, and at the same time show just how much time had passed. It is much easier to care about these characters as old men after we have seen, however briefly, who they were in their youth.

As previously stated, there are a decent amount of laughs involving the ages of the four men. One sight gag, for example, shows their naked backsides. The verbal banter between these ancient friends is well played, demonstrating both how well they know each other as well as the burden of forty years of emotional baggage. In defense of the routine plot is the fact that it is quite plausible as a real life news event.

Finally, though Clint Eastwood's direction is certainly not inspired, the outer-space cinematography is. The final thirty minutes of the film include some truly amazing shots. We, as the audience, get to share the experience of being at the edge of the Earth's atmosphere, made all the more sweet because these men had to wait forty years to get there. 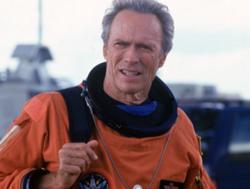 Okay, Scott dislikes the romantic subplot. Patrick thinks the pace is to leisurely. They are both correct. Space Cowboys spends too little time in space and not enough time with the four actors bantering back and forth.

In fact, the one and only thing this movie did perfect was the cast. It's always great to see actors with such long, great careers still working and being so entertaining. They are all gray and/or going bald, but they still have the charm and presence to fill a screen. Clint Eastwood still has that glint in his eye that you're not sure whether it means he likes your or is about to hit you. Donald Sutherland smiles and laughs in he same great way he did in M*A*S*H. James Garner's voice is all the more distinguished with age. And no other actor plays a better good ole boy than Tommy Lee Jones.

A great film for watching four old hams demonstrate that true charm is ageless, but a plot that is simpler than a Saturday morning cartoon.