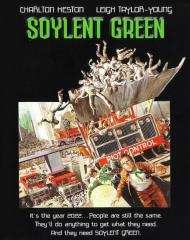 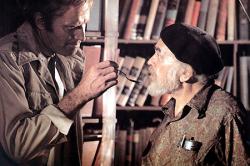 Soylent Green epitomizes 1970's dystopian future movies. It takes place in the year 2022. The population of New York City is a staggering 40 million souls. Homeless people crowd apartment stairways with an armed guard stationed on each landing. Air pollution has caused the earth's atmosphere to grow warmer, a phenomenon quaintly referred to in the movie as the greenhouse effect (this would later be changed to global warming and - as of this writing - is now called simply climate change). With depleted natural resources and dying oceans the future of humanity looks very bleak indeed.

Real food is scarce and exorbitant in price. Something only the securely sequestered rich can afford. A jar of strawberries, for example, costs 150 bucks. Feminism seems nonexistent in this cruel future, as prostitution has been legalized in the form of female “furniture” that is included in the rent at luxury condos. Although this movie was set 50 years in the future from the time it was made the cars, fashions and television sets are all clearly of the 1970s. In one scene a woman plays a laughably primitive “futuristic” video game that looks like a cross between Pong and Space Invaders.

The masses subsist on government issued crackers of various hues called Soylent Yellow, Soylent Red and the new, more nutritious, Soylent Green. This last variety is in high demand and short supply, which causes riots. This leads to one of the movie's most dated, and unintentionally funny, sequences. Their form of riot control consists of sending in bulldozers – or Scoops as they are called here – to physically remove the out-of-control populace. The crowds scream in terror as they are literally scooped up and dumped in the back of these incredibly slow moving trucks.

An aging Charlton Heston stars as Robert Thorn, a tough NYC detective investigating the murder of a wealthy and important citizen (an elderly Joseph Cotten in a small part). Thorn lives with his partner and best friend Sol Roth (an ancient Edward G. Robinson in his final screen role). Sol is old enough to remember Earth as it was before pollution and overcrowding turned it into a daily fight for survival. As he often tells Thorn, “Why, in my day you could buy meat anywhere! Eggs they had. Real butter! Fresh lettuce in the stores.”

Sol provides the movie its soul. Robinson died of cancer shortly after filming was completed. The scene where Sol goes “home” being the last scene he ever played on camera. This sequence, with its classical music and panoramic shots of nature, is the best moment in the movie and elicits a genuine emotional response from the viewer. Thorn breaks down in tears in one of the most touching moments Heston ever played onscreen. Soylent Green depicted a form of euthanasia several decades before the term acquired widespread familiarity.

SPOILER ALERT: Thorn's investigation (or more precisely Sol's) eventually leads to the uncovering of a massive conspiracy, at the center of which is the secret ingredient being used in the popular new green crackers. The movie ends famously. The big revelation is made and a mortally wounded Thorn screams it out as he's being carried off on a stretcher, “Soylent Green is people!” Not exactly an uplifting ending but it is a memorable one.

Soylent Green is dated and unintentionally silly at times but it remains a fairly entertaining combination cop movie/science fiction film. It is of historical interest to movie buffs as the last fictionalized movie to feature scenes shot on MGM's famous backlot in Culver City (narration sequences for That's Entertainment! would be the final scenes of any kind filmed there before it was bulldozed to make way for condominiums). Today Soylent Green is still worth watching, especially for Edward G. Robinson's heartfelt final performance. 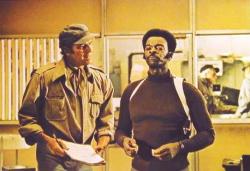 Science fiction of the early 1970s was often quite dark in tone and dealt with the end of the world. As Patrick mentioned, dystopian movies were practically a genre of their own. I've always believed this is why Star Trek became a cult hit during this time. Unlike the rest of Sci-Fi, it depicted a promising future, something this movie does not. It's one of the most pessimistic views of the future ever put on film.

Although Soylent Green is supposed to take place in the future, in reality it is set in an alternate version of 1973. A lot of Sci-Fi movies do that and it's a pet peeve of mine. They take modern times and insert one different or gimmicky, futuristic idea into it and pretend it's the future. Surrogates is a recent example of the genre that does something similar.

In the case of Soylent Green, they've increased the population and temperature of New York City circa the 1970s to drastic degrees. They make no attempt at trying to guess what future technology might bring. There's no mention of computers. The cars, trucks and other vehicles all look exactly like 1970s vehicles, as do the fashions and the haircuts as Patrick said. As he also points out, they didn't even predict feminism, as women literally are treated like furniture, even by Heston who basically rapes Shirl by ordering her into bed, even if she does end up falling for him. That scene would have been much less uncomfortable if they'd made Shirl turn out to be an android.

There is a central mystery to the story but it's of little interest. Heston does some snooping around, following the bodyguard and so forth, but none of it comes to anything. Sol does all the investigation that matters and tells him what to do with his final breath. Heston just does the legwork in the last 10 minutes and then does the big reveal.

Despite all of that, this is still an enjoyable movie. Heston does his best Heston, which basically means being macho all over the place. He's also cynical and a bit of bastard. He's the good guy, but he's also looking out for number one. He's not above stealing from those he's investigating or having sex when it pleases him without concern for the woman's feelings. He's a dark hero for a dark movie. Heston wasn't the greatest actor, but he certainly had screen presence. And nobody, but nobody did better last minute melodramatic Twilight Zone like reveals at the end of Science Fiction films than he did.

I agree with Patrick that Sol gives the movie heart. Robinson is the most human character and he delivers a heartfelt performance. His death is certainly the most emotional scene. Reportedly, Robinson had told no one on the film that he was dying except for Heston, whom he told right before they filmed that scene because he thought it would help Heston's performance. After seeing the tears in Heston's eyes as he says good-bye to his friend, I have to agree that it did. And knowing that Robinson died just 12 days after filming this scene, just adds to the poignancy of it.

With as many things wrong, dated and sometimes unintentionally silly, this movie shouldn't be as enjoyable as it is. For that we can thank Heston and Robinson. Their scenes together are the movie's best moments and are surely the reason it is still remembered so well today. 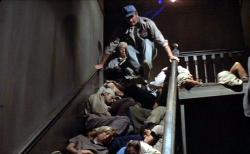 The story contained in Soylent Green is not that engaging and as such, I was never able to emotionally invest in it. I spent more time thinking about the movie and what it represented historically, than actually being entertained by it.

It makes little sense that food is so scarce and the population is so large. If starvation was as dire as this film depicts people would have died off in record numbers. Just like the deer/wolf predation, when the wolves food source (deer population) dwindles at the fangs of hungry wolves, the wolf population does as well, resulting in the deer repopulating, giving the surviving wolves more to eat thus increasing their number, only to repeat the cycle. Thus, if the world was so crowded that people pack stairwells to sleep, and real food is so rare that only the very wealthy can obtain it, starvation would be spreading like the plague and eventually solve the problem itself.

Another plot issue, that my brothers mentioned, is the sexism. The women depicted here get less respect than women in Saudi Arabia. Like the technology and the fashions, the sexist attitudes are more representative of 1973 than 2022. The film may take place 50 years in the future from when it was made but it very much represents more the time it was filmed.

With the exception of Star Trek, as Scott wrote, science fiction of the time showed us a bleak future. Whether apes are in charge like in Planet of the Apes (1968), or people are killed when they turn 30 in Logan’s Run (1976), futuristic films of the late 60s and early 70 were mostly depressing. Thank God Star Wars came out in 1977 and science fiction finally became fun.

When Soylent Green was released, the United States had just gone through The Watergate scandal in 1972. The Vietnam War had two more years to go. 1973 saw the U.S. economy struggle with major inflation. Pollution had become a serious issue. This movie is based on the science fiction novel “Make Room! Make Room!” by Harry Harrison. It was published in 1966, just three years after the John F. Kennedy assassination.

As bad as this film is, it spoke to audiences at the time who did not see a bright future. Watching it today, it has very little to offer beyond Edward G. Robinson’s moving death scene. I could also go on and on about how Hollywood got the whole global warming thing wrong again, that Patrick mentioned, but to spare my brothers the agony, I will leave it at that.