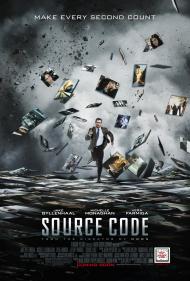 Science Fiction films have the license to ignore common sense and any laws of nature.  Physics be damned.

Source Code starts with a man waking up on a train.  He has no idea who he is or what he is doing there, even though the lady he is with seems to know him.  Eight minutes later the train blows up and he finds himself alone in a dark capsule talking to a military woman on a screen.   He asks many questions and eventually learns that he is participating with new technology that allows a person to be sent into the last eight minutes of someone's life.

He is being sent into the body of a man on a train who is physically similar to him.  It works better that way.  His job is to find a bomb that has been planted there and discover who the person is who planted it.  He only has eight minutes at a time to find this information.  Once he discovers the perp, the authorities can arrest him before he strikes again.

Being that this is a Hollywood movie, all he has to do is look for the whitest guy on the train.  Although all kinds of minorities are sitting around him, I knew it was still going to be a white guy.  He goes back many times and learns a little more each trip.  He also starts to fall in love with the girl his surrogate body is traveling with.  He also learns some disturbing things in his real world.

Jake Gyllenhaal carries the movie on his shoulders.  He is in nearly every scene.  You feel all of his frustrations and fears.  I have never been much of a Jake Gyllenhaal fan, but he does some very intense work here.

The resolution may or may not make sense to you.  It depends on how far you can suspend your disbelief, and this movie asks you to suspend it pretty far.  The ending is the make or break moment.  You will either think it a happy ending or enormously sad ending.

My brothers always go on about how I bring politics far too often into my reviews.  Well too bad.  Source Code deals with terrorism, U.S. soldiers deaths in the Middle East, and assisted suicide.  All of these can be hot topics, but they are not the actual focus of the film, so I will leave it at that.

Source Code is a mind bending rollercoaster ride through an action packed ethically engaging science fiction thriller.  It is just too bad Hollywood cannot come up with a villain who is not a white male.  Hollywood again attempts to be politically correct and not offend anyone, except those of us who actually pay attention to the world around us. 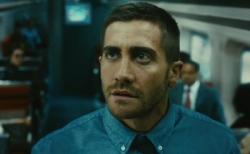 Eric, you're watching a movie where, as you succinctly put it, "... he eventually learns that he is participating with new technology that allows a person to be sent into the last eight minutes of someone's life" and you're complaining about the realism of the nationality of the villain? Do you know how ridiculous that sounds? Not to mention that it makes absolutely no difference to the story what nationality the terrorist is anyway. The villain's motives aren't really even that important to the story, they're just the impetus to get Colter into those eight minutes. And you seem to be perfectly willing to allow Science Fiction the license to ignore the laws of Physics, but when the terrorist doesn't match your profile of what a terrorist should look like, you can't ignore it?

The plot reminded me of an extended episode of The Twilight Zone. The first eight minutes where Colter doesn't know what's going on (and the audience wouldn't either if the trailer hadn't given it all away), could easily have been set up by  some opening narration by Rod Serling and the ending could easily have concluded with, "...somewhere in the Twilight Zone." And to be clear, I mean that as a compliment as there are some nice twists and turns in the plot.

Like you Eric, I haven't been the biggest Jake Gyllenhaal fan.  I always felt he was adequate, but nothing overly spectacular, but this part suits him and he gets to show some range. Although the love story is between Colter and Christina, the emotion between Colter and Goodwin seems more genuine. Although we're never told how many times Colter relives those eight minutes, it just doesn't seem long enough for him to really fall in love with her. I mean, she's nice looking and she seems like a nice person, and maybe with enough time they really could develop a relationship, but not so quickly.

At just 90 minutes the pacing of the film is brisk and keeps the tension high. Although the mystery of the terrorist is a bit weak, it works enough for the story.  I mean, why does the terrorist want to blow up a train before he detonates a bigger bomb?  Won't the first bomb's explosion put the city on a higher state of alert? And how do they know that the bomber was even on the train during those eight minutes?

The ending worked for me even if it does open up a slew of questions about everything that went before it. Despite that, it was satisfying to me, if not entirely logical. I will say that it does leave open the possibility for a sequel and if so I would definitely go and see it. 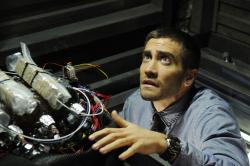 Jake Gyllenhaal has a bomb on his hands in Source Code.

Unlike my brothers I have been a big Jake Gyllenhaal fan ever since seeing him in Donnie Darko and he will always be Jack Twist from Brokeback Mountain to me. I agree with Eric and Scott that he does good work here and single-handedly keeps the audience invested in what is a convoluted mess of a time travel plot device. I didn’t find the ending happy or sad, merely ridiculous.

The ethnicity of the bomber didn’t bother me; after all the U.S. has been attacked by both foreign Islamist terrorists as well as home-grown Christian ones. It makes no difference to the story being told. I guess if you dislike liberal Hollywood politics then you will look for any reason to fault a movie.

SPOILER ALERT: The biggest plot hole to me was the ending. All the other times Colter relives the final 8 minutes of his host body’s life his actions do not change the past. For example he saves the girl’s life once by getting her off the train before it explodes but it doesn’t alter reality. But then at the end of the movie all of a sudden a new reality is created? How convenient for the writers to concoct a happy ending.

Scott, had this been a segment in a Twilight Zone movie, as you suggest, I would have bought it. However, the way it plays out here it is just too ludicrous to take seriously. Yes there are some moments of genuine tension thanks to Gyllenhaal’s acting talent, but the script is half as clever and twice as contrived as it wants to be.