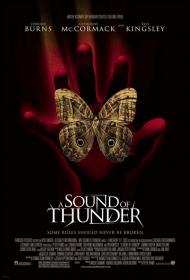 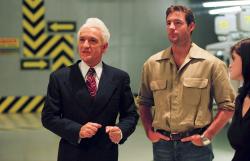 Ben Kingsley and Edward Burns in A Sound of Thunder.

A Sound of Thunder isn't the worst movie of 2005 (that honor still goes to Alone in the Dark), but it's definitely in the running. Normally you would have to stay up very late and watch cable to see a Science Fiction movie with such a ludicrous plot and third-rate special effects. You don't normally expect to see it on the big screen.

The plot is based on a Ray Bradbury short story, that I admit I've never read, but which I can only assume is better than this version, otherwise it would never have been green lit in the first place. The story is set in Chicago, fifty years from now. Judging from how different the city looks, I can only assume that Chicago is going to have a building boom sometime in the next fifty years. However, apart from the new architecture the future doesn't seem that different from today, except that apparently time travel will be discovered.

Time travel, which would surely be the greatest, most society altering invention ever, is exclusively owned and operated by a company called Time Safari to take rich, bored tourists back in time to kill dinosaurs. I mean forget studying history or exploring the future, we'll make a couple of bucks. Apparently this is some denouement of big business, but surely if you wanted to get rich and you owned a time machine, you wouldn't need to cart tourists around. At the very least you would be able to place bets on every sporting event with the foreknowledge of who was going to win.

Naturally, the main rule of time travel as stated in this movie is never to change the past. And just as naturally, that rule is broken on one of the time trips when a clumsy hunter steps on and crushes a butterfly. With a logic that only makes sense in this movie, this sends waves of time through time, each one altering the future slightly. Just what is a wave of time anyway? Whatever it is, apparently it not only travels through time, but space as well, since every time one hits Chicago it sweeps over the city like a visible tidal wave. Why doesn't it affect the city all at once? Cause it wouldn't look so dramatic of course.

The upshot of all this is that Chicago is soon looking prehistoric, with jungle growing everywhere and odd half-baboon/half-dinosaur creatures running around. The time travelers soon guess what is going on and know that they must go back and undo whatever change they made. Of course that would make too short of a movie, so before that happens we are "treated" to two overly long chase scenes through the city featuring some more of this movie's brilliantly cheesy effects.

Perhaps the saddest thing about this movie is watching actors of Ben Kingsley and Ed Burns caliber try and say their lines without being embarrassed. This is made even harder for Kingsley with the ridiculous wig he's forced to wear. Did these guys lose a bet or something?

This movie is so bad, that I kept waiting for those guys from Mystery Science Theater to pop up in the corner of the screen and start commenting on the action. Or maybe I was just hoping they would since that would have been entertaining at least.