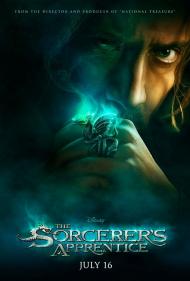 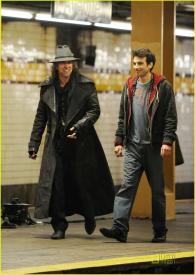 Cage and Baruchel in their

The idea for The Sorcerer's Apprentice comes from the one segment of Fantasia (1940) where Mickey Mouse plays a wizard's apprentice, who gets into trouble for trying to use magic to clean up.   Although this movie creates an entire new story, that one scene remains.

Balthazar is an old wizard, who was once the apprentice of Merlin.  He and two other wizards, Horvath and Veronica, served Merlin in his battle with Morgana.  Horvath betrayed them and Merlin was killed.  To stop Morgana, Veronica trapped her and herself in a container called a grimold.   Balthazar then trapped Horvath in it.

Cut to modern times where a 10 year old, Dave, finds himself in an antique store accidentally knocking over the grimold, setting Horvath free.  Balthazar has been searching for the one who would inherit Merlin's magic ring and Dave is it.  However, Balthazar gets caught in an urn with Horvath for ten years,

Enter Jay Baruchel as the college age physics nerd with the token black roommate and the cool underground science lab.  Horvath wants to release Morgana while Balthazar tries to train Dave, who is distracted by a blonde he has been in love with since he was ten.

The special effects are amazing.  Both my sons love the car chase.  It feature some very hot sports cars and some magic twists.  The mopping scene is not as funny as I hoped.  It is clear that lots of money went into this film.  The whole movie is brilliant eye-candy.

As it has been suggested to me, that if I just leave my mind at the door and not think about it, I will better enjoy movies.  How can I shut off what I already know?  There is very little originality in the plot.  This movie has a nervous boy wizard, Merlin, end up the world apocalypse, a lost love.  It has all been done many times before.

Cage can do great things when playing an off the wall character, but I was somewhat disappointed with his work here.  The best moment is when Dave yells to him, "Are you crazy?" and Balthazar responds by using his fingers to indicate " a little."  The crazy angle should have been played up much more.  Balthazar too quickly turns into a stern teacher, and thus he becomes quite dull.  In the action scenes he never seems too concerned.  He should have played this role bigger and crazier.

It is a harmless action/adventure fantasy that will fill your eyes with amazing special effects.  The plot will not tax your brain, and if you need to run to the bathroom, you will not have a hard time figuring out what you missed. As an escape from the summer sun, you could do much worse than The Sorcerer's Apprentice. 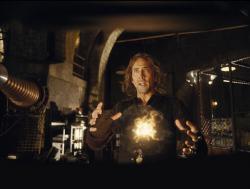 In a recent interview Nicolas Cage said that he wanted to make films that he could show to his son.  With the Sorcerers' Apprentice he certainly succeeded in making a movie that kids might enjoy, but for grown-ups I agree that the best thing about seeing it is a few hours escape from the heat in a dark, air-conditioned theater.  It's not a horrible movie by any means, but it's completely insubstantial.  You won't be bored, thanks to the eye-candy, but the plot will start to fade from your memory almost before the credits finish rolling.

The geeky nobody who suddenly discovers he has powers is one of the oldest plots in existence, going back at least as far as the Greek Myths.  Hell, if you look at it from a certain angle, isn't that the plot of the new testament of the Bible?  Having the nobody suddenly discover they have magic powers was revived by J.K. Rowling and it seems like everybody under the sun has been rushing to imitate her with increasingly reduced results.

To make this movie more unique they should have aimed it for adults.  As it is, there's never a real sense of danger and no one is ever injured except for a couple of the evil wizards that Horvath kills.  They should have made it darker and like you said Eric, had Cage play Balthazar crazier.  I mean the guy's been searching for this kid and been separated from his true love for a thousand years, further compounded by the fact that he's trapped in a jar with his mortal enemy for the last ten of those years.  Would it be surprising if he'd developed some eccentricities?  Even in restrained mode though he's still more interesting than his dull protege Dave.

The car chase is one of the best action scenes.  Balthazar and Dave driving through the mirror into the reverse world is perhaps the coolest moment in the story, although I also liked the creative use of the Chrysler Building's gargolyes.  Certainly the production values are top notch, if only the script had been given as much polish.

It didn't surprise me to learn that this movie was made by the same team that made Cage's National Treasure movies.  Like those movies, this one looks good and has some lightweight action, but ultimately disapoints, but hey, at least Cage's son can watch it.