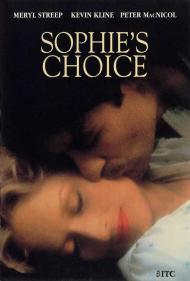 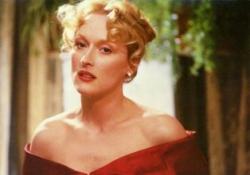 Although it runs well over two hours, and lacks some character development, Sophie's Choice remains a powerful film, with one of the greatest performances by any film actress.  It made stars out of Streep and Kline, and earned Streep a pile of awards including the Academy Award for best actress.

In the summer of 1947, Stingo, a young, innocent southerner, moves to a boarding house in Brooklyn.  He wants to be a writer, and admits in narration that he is inexperienced in life.  He soon becomes infatuated with the couple living in the room above his.  He describes Nathan as "glamorous" as he is prone to dramatics, dressing up and temper tantrums.  He falls under Sophie's charm instantly, as every man in the film seems to.   They all become friends, spending lots of time together.

Nathan and Sophie are both emotionally wounded beyond repair.  Stingo loves them both and makes futile efforts to help them.  What Stingo eventually learns is that although they never told each other the details of their lives, Sophie and Nathan have an odd understanding of each other, accepting the other for what they are without needing to know certain details.

Through flashbacks we learn some hard truths about Sophie's life.  These scenes are as harrowing and tense as you would expect being in a Nazi concentration camp.  Not until the end of the film do we finally get to the scene that the film's title refers to.  If you do not know what it is, I will not spoil it, but you will not soon forget it.

This film could use a bit of editing.  Stingo's date should have been cut.  It is a bit funny but this is Sophie's Choice, not Stingos.  The friendship montage could also have been cut as  Nathan, Sophie and Stingo spend so much time together that we fully understand their relationship.

No matter what you think of this film, it remains a power house performance by Meryl Streep.  In the history of my film watching, three performance by an actress really stand out.  Judy Garland proving to be the most versatile actress of her time in A Star is Born, Katharine Hepburn throwing words more dangerously than daggers in The Lion in Winter, and Meryl Streep making me fall in love with her and then breaking my heart in Sophie's Choice.

She should not have been able to pull this role off.  The writer pictured Ursula Andress as he wrote the novel.  It makes sense as she is often referred to as beautiful by nearly every man who meets her.  Her looks alone saved her several times in the story.  Would Nathan have stopped to help her if she was stone cold ugly?  His first comment was her looks.   The Nazi officer only stops to talk to her because he finds her hot enough to want to screw.  Streep is no where near Ursula Andress but she is filmed in a way so as to present her as a beautiful woman.  The shot through the window is strikingly affective.

Either way, we accept that she is gorgeous and she is Sophie.  Streep speaks in several languages and has a very strong Polish accent when speaking in English.  She laughs with Nathan and cries with Stingo.  Her performance is some times subtle and other times in your face.  She is a well rounded character with warts that only grow on her soul, which is as diseased by experiences as it is by guilt.  She often has to work more than one emotion at a time, but always pulls it off.

Sophie's Choice could have used a better story arc for Stingo.  This couple opens his eyes to experiences he never imagined but the film never states how it affected him.  Kline and Streep have great chemistry together, but Kline disappears from much of the last part of the film.

Sophie's Choice is not completely perfect but it always leave me thinking about the characters and their situations.  Just why is Sophie with Nathan?  I have several theories but it would give plot points away to discuss them.  I love a movie that keeps me thinking about the story even after the credits rolled. 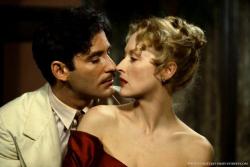 I have to admit that I am not a huge Meryl Streep fan. I know she is considered to be our greatest living actress and all that but I find her somehow to be too cold and calculating in her work. She is technically proficient but she never really draws me in to her characters and I often feel as if I'm watching her act. It's like she is the perfect acting vessel on the outside but an empty package underneath her veneer. Katharine Hepburn, when asked about Streep, made a famously succinct reply. She said simply, “Click. Click. Click.” I know what she meant.

I do, however, agree with Eric's statement about this being one of the greatest performances in film history. This is by far the most complete performance of Streep's entire career. Yes she is as impressive as always with all of the flashy exterior mannerisms of her craft, like her felicity with language, her uncanny ability to mimic any accent, and her adroit body language. But Streep also breaks your heart as Sophie Zawistowska, a woman forced to make a choice that is unimaginably anguishing. She brilliantly evokes Sophie's fragile state.  Beneath her happy facade Sophie is an empty shell of a person. Streep absolutely deserved the Oscar as well as all the other accolades thrown her way.

As Eric said, both Sophie and Nathan are wounded beyond repair. Sophie can never expunge her feelings of guilt and Nathan has issues that could not be overcome in 1947 (I don't want to give too much away). They have a tacit understanding of - and deep-seated need for - each other. Kevin Kline is likewise a perfect match for Streep. Together they create a pair of the screen's most tragic lovers and I think the reasons they are together become pretty clear as the story unfolds.

Stingo, obviously, represents William Styron, the author of the novel Sophie's Choice. Like his page-to-screen alter-ego Styron grew up in the rural South and lived in New York City in the years immediately following the Second World War. I disagree with Eric when he says Stingo needed a better story arc though, and I think my brother contradicts himself a bit. Earlier in his review he points out the fact that this isn't Stingo's story, so why then does he need a better story arc? He is simply the means by which we are able to enter into Sophie and Nathan's world. Peter MacNicol is quite good, quietly holding his own against the two more showy performances by Streep and Kline.

I do agree that the movie runs too long. Eric mentioned the two scenes that should have been cut. The becoming-friends montage is cheesy and Stingo's date scene is unnecessary since the point of it was too show us that Stingo is inexperienced and unlucky in his attempts at seduction. Later we are told in voice-over that Stingo is a virgin, which renders that earlier scene superfluous.

The fact that the not traditionally beautiful Meryl Streep plays the very beautiful Sophie reminds me of Bette Davis as Fanny in the classic Warners' melodrama Mr. Skeffington. Both women were able - by the sheer force of their talent - to ACT beautiful.

Sophie's Choice is an emotionally powerful movie that made Meryl Streep a legend. It's worth watching for her towering performance alone.