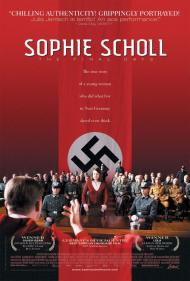 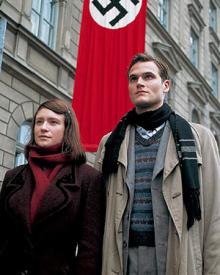 Julia Jentsch and Fabian Hinrichs as Sophie and Hans Scholl.

Scott recently wrote that he wonders why I still watch Hollywood movies as I am so critical of them.  My disappointment in the Hollywood product is why I have been watching so many foreign films.  Hollywood seems stuck in it's own dull stereotypes.  Foreign films have stories to tell that I have not heard.

Sophie Scholl: The Final Days tells the true story of the last days of the White Rose.  It was an underground organization founded by college students, defying the Nazi regime.  Hans Scholl was a German soldier who became disgusted when he returned from the front to attend college, and discovered that Nazi propaganda did not report on the horrors of war that he witnessed.

With several other students and his sister Sophie, Hans wrote and distributed leaflets that "called for the active opposition of the German people to Nazi oppression and tyranny."  With the White Rose's latest leaflet ready for distribution, Sophie volunteers to distribute it with Hans on the college campus.  They, and fellow White Rose member Christoph Probst, get caught and arrested.  The rest of the film is almost all dialogue taken from interrogations and court records.

Before sentencing, Sophie and Hans get a few good lines in to the court.

Sophie Scholl, "You will soon be standing where we stand now."

Hans Scholl, "If you and Hitler weren't afraid of our opinion, we wouldn't be here."

The most famous moment being Hans yelling, "Long live freedom!"

The judge, Roland Freisler, got the last word, "In the name of the German people, in the criminal case against Hans Fritz Scholl from Munich, Sophia Magdalena Scholl from Munich, and Christoph Hermann Probst from Aldrans, the people's court has reached a verdict following court proceedings on 22 February, 1943: The defendants published leaflets at a time of war, calling for people to sabotage armaments, and to overthrow our people's National Socialist way of life. They propagated defeatist ideas and viciously insulted the Fuhrer. By so doing, they aided the enemy and demoralized our troops. They are therefore sentenced to death. They lose their rights as citizens for all time. They bear the cost of the trial."

The three were immediately put to death.  The other members were later caught and likewise given the death penalty.  Judge Freisler would die before the wars end in an allied bombing.

Sophie Scholl: The Final Days is not an action piece, nor is it much of a thriller.  It is a window into history.  These young people spouse the virtues of a free country and a capitalist society.   They knew what they were doing was dangerous, but they spoke out when so many turned a blind eye.

History has marked Germans of the time, even those not active in the Nazi party, as complacent to the evils of Nazism.   This movie shows that not all of them agreed with what was happening, and that some were brave enough to voice a dissenting opinion, even though they paid the ultimate price to express it.   Hollywood would never make this movie as it is anti-socialism and pro-capitalism.