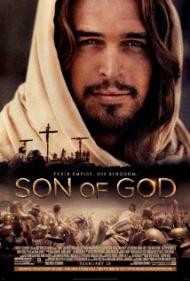 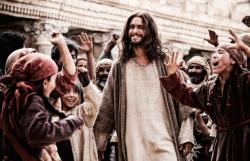 Diogo Morgado as Jesus in Son of God

Roma Downey of "Touched by an Angel" fame and her husband Mark Burnett, who produced such television shows as "Survivor" and "The Apprentice", produced "The Bible," a 10 hour mini-series for the History channel. The $22 million series, based on stories from the Bible, was a huge success. So much so that they decided to cut it to a 2½ hour movie for a theatrical release, titled Son of God.

Downey plays the role of Mother Mary with an otherwise unknown cast. Jesus is played by Portuguese actor Diogo Morgado, who, with his sensitive eyes and long flowing brown hair, looks just like every image I ever saw of Jesus in catechism class. I was not too surprised to discover that Downey is a catholic. Her portrayal of the mother of Jesus is likewise a direct lift from all of those catholic depictions. She wears blue robes just as the statue of Mary does in the Catholic Church I attended as a child.

With that said, Son of God is an, accurate to the story, portrayal of Jesus Christ. It takes no liberties with it, which makes for an educational experience but not a very creative one. Morgado speaks many famous lines from the Bible as we see him preaching on the mound and healing the afflicted. This makes the pages from the Bible come to life but it creates a generic feel to the entire proceedings. It would have been blasphemous to change anything Jesus did or said for the film, but it would have been interesting to imagine how spectators of the time saw him.

Jesus is shown becoming more famous as he does one miracle after the next. Eventually, he enters a city like a rock star. His disciples are like band members and groupies while crowds of fans swarm about, trying to catch a glimpse of him. How did his fame sweep so quickly when the fastest mode of communication was by chariot and word of mouth?

Unlike Passion of the Christ, which focused almost exclusively on the crucifixion, Son of God better explains how Jesus made enemies as well as supporters. Some of those who sought him out saw him as someone who would free them from Roman rule. Jewish religious leaders saw him as a threat, as he was highly critical of their financial dealings in the temple. Jesus is not shown at all as political but about love and faith.

Here is the beauty and tragedy of Jesus’s life. He wanted nothing of men but for them to believe in him and in a God that wanted greatness for everyone. He preached love and honor. Several times he comforts a person by telling them to not be afraid. Jesus lived by rules and when others did not, he held them accountable for them and with that he stepped on some toes. He did not become what everyone wanted him to be as he stayed true to himself.

Son of God is a great introduction to the Bible. It brings the scriptures brilliantly to life, even though the CGI shots of ancient cities are less convincing than what we see in most modern video games. It is heart wrenching to see Jesus falsely accused, beaten and murdered but this film lacks the raw power of Passion of the Christ. While Mel Gibson’s film left you emotionally exhausted, Son of God feels more like a really engaging Sunday school lesson.