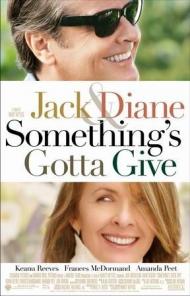 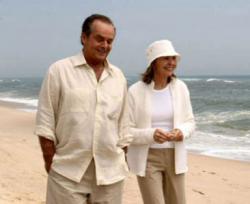 Jack Nicholson and Diane Keaton in Something's Gotta Give.

Something's Gotta Give is that rare love story exception. It is about people near retirement age. It shows that love can be just as good, or perhaps even greater at an older age.

Harry is a 63-year-old playboy. He has a heart attack while on a weekend trip with his twenty something girlfriend. They were at her mother's home at the time and Harry ends up staying after the heart attack to recuperate.

The mother, Erica, is a divorced playwright who is content in her single life. Harry has never dated a woman his own age. From the very first moment these two actually talk to each other, it is clear that they belong together. In some scenes, they appear more like an old married couple than people who just met days earlier.

They have a romantic, yet brief love affair. Erica is ready for the commitment, but Harry is an old dog who isn't ready to learn a new trick. Harry goes back to his life in New York while Erica writes a play about their affair. She also starts dating Harry's doctor who is 20 some years her junior.

Not since When Harry Met Sally have I enjoyed a romantic comedy so much. I, as well as the audience laughed out loud often. Both nude scenes drew the biggest laughs. Nicholson and Keaton look like two old friends on the screen as their characters realize that love can come at any age.

The one thing this movie is without is that big emotional scene. You know, like the wedding scene where Sally slaps Harry. There are plenty of emotions as Keaton cries for what seems like 5 straight minutes of screen time. Yet, there is no scene where one character tells off the other. Then again, this is a movie about older people falling in love. Perhaps older people don't have those emotional public outbursts.

The best things about Something's Gotta Give are scenes where Erica and Harry fall in love. So often in a movie the audience just accepts that two people are in love for no reason other than they say they are. In this movie, the audience knows they love each other before the characters do. While talking, the two characters gloss over things that they both like or have in common. It is that rare love story where you can actually see that the characters love each other and not just lust each other. 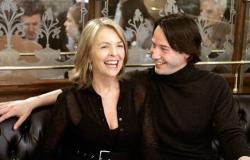 Diane Keaton and Keanu Reeves in Something's Gotta Give.

I agree with Eric's review of this movie up to a certain point. He's right when he says that it is a treat to actually watch two characters fall in love rather than just being told that they love each other. Harry and Erica's time together while he is recuperating are the best moments in the movie. However, after he goes back to New York, the story begins to lose its focus and laughs before stretching on for too long until the climax in Paris. A romantic comedy longer than 2 hours is just too long.

That being said, the first half of this movie is nearly flawless. Its story and the way it is filmed are very like a play with most of the action happening in the one set (Erica's Hampton's beach house). The banter back and forth between Harry and Erica is well written and even better acted. Keaton and Nicholson are such old pros that the chemistry between them is astounding, and does show, as Eric said, that love isn't exclusively for the under 40-set. They are so good, that they blow the much younger, and more attractive actors (Peet and Reeves), clean out of the water.

While it cannot be doubted that Keaton gives a great comedic performance here, I am very surprised that she was nominated for an Oscar for this performance. This is a great example of sentimental vote casting. I'm all for seeing more comedies rewarded with prizes, but compared to the other women nominated this year for Oscars, Keaton's role here seems overly lightweight.

A funny and touching romantic comedy featuring two great actors, Something's Gotta Give, could have been better if only the pacing and comedy had held out throughout the movie. Still, as a love story featuring grown-ups, and not two young models, this movie comes as a relief. 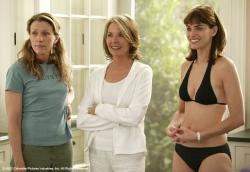 As has been stated, both Jack and Diane give great performances in what starts off as a very funny romantic comedy. Jack's aging playboy provides most of the laughs early on as he comes face to face with his own mortality. Later in the movie Diane gets more of the laughs, especially during her extended crying jag. And as Eric said her nude scene is a priceless movie moment. At the same time I agree with Scott that the pacing of the movie, as a whole, is not that great and that it takes a bit too long to get to the final inevitable scene in Paris. With comedy timing is everything. Without it there is not much that can be done. Not even great acting and dialogue can make up for it. Although to their credit Keaton and Nicholson nearly pull it off.

On a personal note, I found my reaction to certain scenes interesting. Seeing Nicholson with the decades younger Peet did not seem unusual - but when Keanu Reeves (who is way out of his league here) was passionately kissing Diane Keaton I thought, 'wow that looks strange'. I guess because it is a much less common sight to see a younger man with an older woman than it is the other way around. For that and for having the courage to show older folks in love Something's Gotta Give deserves much credit. The fact that it made quite a bit of money at the box-office is proof that many people agree with that sentiment and it also attests to the enduring popularity of its stars.

This is definitely an entertaining movie with several memorable scenes. But what should have been a classic for the ages is instead merely good. Call me crazy, but I wanted - and expected - more.