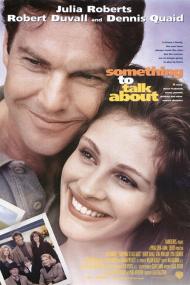 Julia Roberts and Gena Rowlands in Something to Talk About.

Something to Talk About is an interesting cinematic concoction. It was named after the Bonnie Raitt song, has a script by Callie Khouri (Thelma & Louise), and was directed by Lasse Hallström (My Life as a Dog). It's a dysfunctional family dramedy that combines the screenwriter's feminist slant with the director's penchant for feel-good schmaltz. The cast is led by Julia Roberts, who was the biggest female star on the planet in 1995, and Dennis Quaid, who was most definitely NOT the biggest male star on the planet in 1995. The cast also boasts Robert Duvall, Gena Rowlands, and Kyra Sedgwick.

Roberts plays Grace King Bichon. Her father is a member of the southern gentry. He runs a horse farm. Her husband is the dashing Eddie Bichon (Quaid). They have a young daughter who loves to ride and jump and who longs to compete in an upcoming competition. Grace's perfect life is shattered suddenly when she sees her husband passionately kissing another woman on the street during his lunch break.

To her dismay both of her parents (Duvall and Rowlands) advise Grace to forgive her husband and to look the other way during any future transgressions he might make. Incensed, Grace makes trouble for many couples in their small town when she goes on a public tirade at a community meeting. “I just want to ask how many people here have NOT had sex with my husband?” She even causes problems between her parents when she reveals that her father hasn't been entirely faithful to their mother either. When confronted by his wife he lamely replies, “I may have fooled around a little bit, but I've never cheated.”

The story follows a familiar path with almost every plot point being predictable. It culminates at the horse jumping competition but then meanders on for far too long. Since this is a Lasse Hallström movie you just know that at some point there will be a scene where the leads dance together while the music swells and the camera pans around them.

The cast is certainly impressive. Julia Roberts literally glows. It's nearly impossible to look at anyone else when she's on the screen. Dennis Quaid has never been the world's best actor, but he has made a career out of playing charming, philandering husbands (see Everybody's All American or Far From Heaven for two other examples) and could play this role in his sleep. The great Gena Rowlands has a few good scenes as the genteel mother whose marriage is turned upside down. Like Quaid, Robert Duvall is playing his stock character; the stern father who demands complete loyalty and obedience from his family (amazingly enough, nearly 20 years later Duvall is still acting in movies). Kyra Sedgwick steals a few scenes as the tell-it-like-it-is sister.

Something to Talk About combines the work of many talented artists but the result is a mixed bag that fails to rank among the best work of anyone involved. 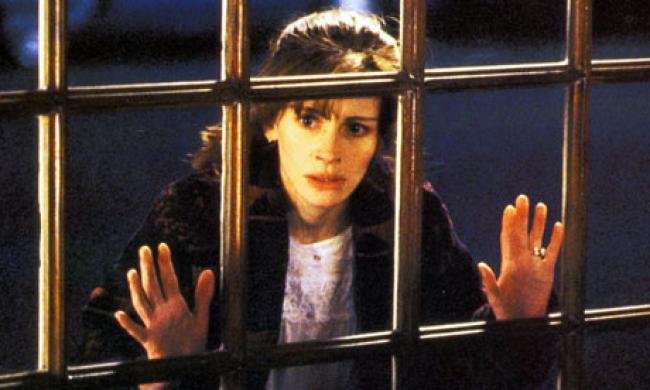 Julia Roberts in Something to Talk About

Something to Talk About was written by the Texas born but Kentucky raised Callie Khouri, who also wrote the seminal feminist film Thelma and Louise. Both movies tell the story of sweet as pie women being victimized by self centered men. When asked about being called a 'toxic feminist' for writing Thelma & Louise, she responded, "Kiss my ass, kiss my ass. I was raised in this society. Let them get their deal worked out about the way women are treated in films before they start hassling me about the way men are treated. There's a whole genre of films known as 'exploitation' based on the degradation of women and as a whole bunch of redneck critics extolling its virtues, and until there's a subgenre of women doing the same thing to men in numbers too numerous to court, as is the case with exploitation film, then just shut the fuck up." Callie obviously has a grudge.

Grace is a married mother who comes from money and now works at her father's business. After getting married to Eddie and having their daughter, she left school before getting her veterinary degree. She now lives a pleasant, leisurely life. Her job truly requires little of her. The place has hands that do all the dirty work, while she occasionally sits at a desk. Her daughter is of school age, so she is gone for most of the day. Grace is a member of a woman's social group and she has the "chore" of organizing their annual cookbook. The big decision being how to list the women's name next to their recipe.


Stress finally enters her cozy life when she discovers her husband's infidelity. Although she is not aware of it at the time, his affair is the best thing that could have happened to her. As Patrick wrote, she confronts her club members and upsets most of them. She stirs up trouble with her parents. In short, Grace has had enough of living the life people expect of her and not the life she wants. Her husband being unfaithful was the catalyst she needed to inspire her to make the moves she should have made all along.

As played by Julia Roberts, Grace is as likable as they come. She starts the film as the victim of men, be it her domineering father or her hound dog husband. Then she gets backed into a corner and decides to fight back. She poisons her husband and tells her father off, "You're telling me that if I just, eat shit politely with a knife and fork, and just learn to swallow the handfuls of bullshit that he serves up to me then everything will be just a-okay. Is that it daddy? I mean that's what you're saying isn't it daddy?" I found it interesting that Grace only tells off her father and not her mother, even though her mother has the same advice for her as her father does.

Kyra Sedgwick as Grace's sister Emma does indeed steal many scenes and has some of the film's best lines. She seems to only be around for comical comments. After kneeing a visiting Eddie in the groin, she announces, "Grace, the lying cheating sack of shit is here." :Later, when Eddie tries to talk to her, she snaps back, "Well lick it, put a stamp on it, and mail it to someone who gives a shit."

Films about women fighting against abusive men, like Thelma and Louise, are hardly original. Raquel Welch killed the men who raped her way back in 1971's Hannie Caulder. Revenge films are exciting because the motive is black and white and the bad guys deserve the comeuppance they get. Films like Something to Talk About are a bit harder to swallow, especially if you are a man. Grace's father and husband have affairs simply because they can. Really, it's just that cut and dry? At one point Eddie states that Grace stopped touching him some months ago. The movie never says why.

The men in Callie's films are one dimensional. There are good guys and bad guys. She writes them as if they are all teenage boys who just need a mother to discipline them until they change their childish ways. Grace grows by standing up to men and going back to school, while we see Eddie's growth because he got a haircut. Callie is clearly trying to get a point across about the sexes but why do so many movies about a woman's growth has to involve overcoming an oppressive male. There are all kinds of coming of age films where a guy learns to overcome some obstacle that has nothing to do with women. My only problem with Callie's early writing is that she only wrote men as women's obstacles.