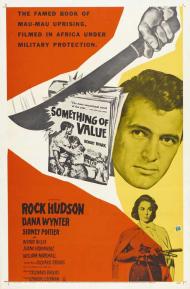 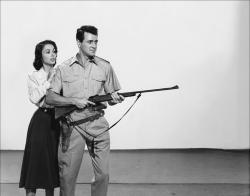 Dana Wynter and Rock Hudson in Something of Value.

Something of Value takes a look at race relations in Kenya during the native Mau Mau rebellion against the ruling British aristocracy in 1945. It stars Rock Hudson and Sidney Poitier. Hudson is Peter McKenzie the son of a wealthy British plantation owner. Poitier is Kimani Wa Karanja a native Kenyan who grew up with Peter. The two are very close friends as the story opens, about to discover the different ways the world will treat them because one is white and the other black.

In an early scene Peter's father slaps Kimani because he doesn't immediately follow Peter's instructions. Kimani runs off and Peter goes in pursuit of him. He discovers Kimani being chased by hyena's after getting his foot caught in an animal trap. Peter saves him and carries Kimani on his back to safety. Even though nothing in the script hints at a sexual relationship between the two men, it nonetheless appears as a homoerotic moment. Both of them were at their most handsome at the time and the sight of a shirtless Sidney Poitier on Rock Hudson's back is very nice indeed. And even though both men get married their relationship with each other is the key one in the movie.

Kimani eventually and somewhat reluctantly joins the Mau Mau rebellion. The scene where he goes with other members of the rebellion to kill Peter's family is powerful. Although Kimani does join in the break-in he cannot bring himself to harm members of the family. Still he stays with the rebellion and eventually becomes a General in the struggle.

Later Peter comes to him unarmed to ask him to give up the fight. Kimani says that he will meet with Peter the next day, at a designated time and place, with his answer. Of course tragic fate intervenes and things go badly. The final scene between the two main characters is good, if a bit dated and predictable.

One thing that surprised me about this movie is that it is quite violent for the time period. It is in black and white and came out in 1957, but it has much killing including that of women and children.

Rock Hudson is top billed but he is easily out-acted by Sidney Poitier. Hudson doesn't even attempt a British accent and he seems rather wooden in the part. Poitier on the other hand seethes with righteous anger.

Not a classic movie but one well worth watching.