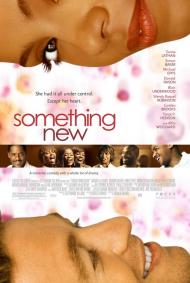 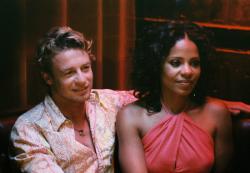 Simon Baker and Sanaa Lathan in Something New.

When I went to watch Something New my first thought was, "Are interracial relationships still an issue in 2006?" How many of us have been involved in or know an interracial couple? This is not the 1960's.

Something New is about a black business woman who falls for a working class white guy. The point of the film ends up being the very predictable message that you should follow your heart. The journey to that moral is the real education.

Kenya comes from an upper class family. She is a rising executive who was raised to one day be married to a rich, educated black man. She hires Brian to landscape her backyard and before you know it they are doing the Humpty dance. She loves Brian but has a hard time letting go of her upbringing.

Something New has some good lines. When Kenya's mother, played by the great Alfre Woodward, first sees the backyard, that Brian created, exclaims, "This looks like a bordello in Bangkok." One of Brian's first lines to the uptight Kenya is, "I take hard earth and make things bloom."

The movie really works on the race card. Many jokes are made about the couple's different skin color. "I see you brought your nightlight." someone says to Kenya about Brian being in a darkened nightclub. But the movie is more than just that. Kenya is from a wealthy family. Her mother constantly refers to her husband as "Dr McQueen." Kenya'a brother refuses to shake hands with Brian the first time he meets him because he is the "hired help." Something New is as much about class snobbishness as it is racism.

Why this movie does not work as well as it could is because it spends more time on the couples differences and less on their similarities. We, the audience, can see that they are different, both in color and economic stature. Yet, in nearly every scene someone is remarking about it, as if we may have forgotten in the last 2 minutes that this is about two different people. What we can't see is why they fall in love. She claims that he lets her be herself but why does Brian fall for her? Kenya is hot but she is also a stuck-up snob.