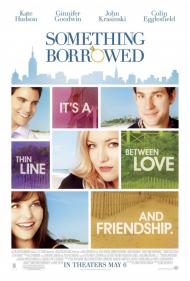 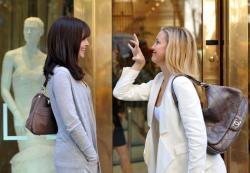 Ginnefer Goodwin and Kate Hudson in Something Borrowed.

Something Borrowed is obviously a chick flick. Know that going in (and how could you not?) and realize that the men will all be one-dimensional supporting players to the more fully rounded women and that the main thrust of the plot will revolve around romantic relationships and also expect for there not to be too many surprises and you won't be disappointed. With those expectations in mind, I was able to enjoy this movie. It's not great by any means and it certainly has its problems, but overall it has a rather sweet charm that kept me from being bored and judging by the reactions I overheard in the crowd of mostly women afterwards, it certainly satisfied its target audience.

Ginnifer Goodwin stars as Rachel, the Hollywood Good Girl of the story. She's a single young lawyer, just turning 30, in New York City. Her best friend is Darcy, played by Kate Hudson, who seems to be reprising her character and her role in Bride Wars. She's the sluttier, selfish, party girl. For reasons never fully explained, Rachel and Darcy, despite having nothing in common, have been best friends since childhood. Darcy takes Rachel for granted and treats her like a doormat and Rachel keeps coming back for more. Since their relationship is central to the film's story, this is by far the weakest plot point. You just have to accept that their friendship is real and strong.

An even stronger hurdle to the girl's friendship is the fact that Darcy is engaged to Dex, the man whom Rachel has been in love with since Law School. She lusted after him for years, but never admitted her feelings for him and instead let Darcy swoop in and take him. Even after that monumental event, Rachel remains friends with Darcy. I mean, are you telling me that Rachel had this huge crush and never once mentioned it to Darcy?

One drunken night however, after Rachel's birthday party, it turns out that Dex also has been lusting after Rachel and the two end up sleeping together. The big question for the rest of the movie is what will Rachel do? Will she end up with the man of her dreams and lose her best friend or will she break it off with the love of her life and remain friends with the selfish bitch, I mean with Darcy?

Although the main cast does a decent enough job with what they're given to work with, John Krasinski as Ethan, Rachel's best male friend (who surprisingly, for a chick flick, isn't gay), steals the movie in terms of humor. He gets the film's funniest lines. "The Hamptons are like a zombie movie directed by Ralph Lauren." is one of his more memorable zingers. His 11th hour confession to Rachel however, doesn't do much to add to the story and should have been left on the cutting room floor.

At the center of the story is Goodwin and she has a certain sweet charm despite being annoyingly weak at times. How does a woman who lets people and life walk all over her, function as a lawyer in New York City? I can only guess that she doesn't do criminal law as it's difficult picturing her standing up in court and either defending or prosecuting anyone.

The title of the movie is quite apt, as nearly all of the plot devices do feel borrowed. There's not much here that we haven't seen before and in better films. But then, what chick flick released these days can't that be said about?

Still, there's a definite cheap paperback feel to Something Borrowed. It's an unoriginal story filled with B-List actors, but that doesn't mean it can't be enjoyed if only mildly. Think of it as a book you might take to the beach. It's junk food for the mind that's just sweet enough to taste good on the way down, even if you're not proud of eating it afterwards. 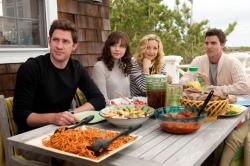 Not surprising to know, but Something Borrowed was written by a woman, Jennie Snyder,  It is based on a novel also written by a woman, Emily Griffin.   I point this out, because this chick flick is about two people who have a hard time letting their true feelings out.  Sure they both love each other dearly but find themselves in a situation of their own making.  You want them to be together and not get hurt, but will they or won't they settle their issues?

I am not talking about Rachel and Dex.  I am referring to Rachel and Darcy.  This movie may be billed as a romantic comedy, but it is really a film about Rachel and Darcy's friendship.  Dex is written as a wimp and as portrayed by Colin Egglesfield is fairly bland.  Neither actress generates any amount of chemistry with him.  There is never any doubt about who will end up with Dex, so the only thing to wait and discover is how it will affect the two best friend's relationship.

For any romantic comedy or buddy comedy to work the audience has to like those involved and want to see them get together.  Rachel fucks her best friend's fiance, twice.   How am I supposed to like her.  She comes across the entire film as a sweet innocent victim of her own indecisiveness.  She back stabs her best friend, and later breaks another person's heart.  Am I supposed to root for Dex or Darcy who are both having their own affairs?  As Ethan says to the perpetually confused Rachel, "You're all going to hell anyway, so you might as well do something for yourself."

It is almost as if we are supposed to excuse everyone's philandering because they all did it.  Well I do not buy that.  The women use excuses.  Darcy says she had sex with another man because Dex has not had sex with her in a while.  Rachel says it just happened.  Dex, however comes out the worst.  He has to be told what to do by everyone.  Darcy tells him they like the house.  Rachel tells him what to do outside the bar at the end.  His father tells him whom to marry.  I thought women were attracted to the alpha male.  Dex is so pathetic that he must let his mother carry his balls around in her purse.

Colin Egglesfield looks like a model.  He shows off his six pack abs on the beach.  Dex is a lawyer from a wealthy family.  What about him could possibly make him so insecure that he would be too scared to ask Rachel out on a serious date and make it plainly obvious that he wants her for more than a friend?  Scott mentioned that it made no sense that Rachel would have never told Darcy her feelings about Dex in college  It also makes no sense that Dex would spend years with a woman in college he is attracted to without letting her know he wants to get her naked.

Scott wrote that it was surprising that Ethan was not gay.  He should have been, so I would not have had to sit through another scene of a man embarrassing himself.  Once he tells Rachel that, surprise, he has feelings for her he becomes a hypocrite.  Throughout the film he keeps telling her to make a decision or tell Dex to make one.  All the while he himself is holding in his true feelings.  He spends most of the movie pretending to be gay because he is also a chicken shit when it comes to telling a woman he slept with that he wants nothing else to do with her.

The only other male in the film is Marcus, and he is the stereotypical man/child.  He acts like all he wants is to get laid and constantly uses a stupid story to try to get a woman to think he is caring.  He smokes dope and skateboards.  He has one of the most belittling scenes in the entire film.  His girlfriend comes out of a building where he is waiting like an obedient son on the steps.  She walks off while he follows her on his skateboard.

As written, the men are just there to look longingly at the women who rule their world.  The scene where Darcy finally finds out that her best friend and her fiance slept together, finds Darcy more surprised , shocked and pissed at Rachel than Dex.  As I already wrote, this is not a romantic comedy, this is a chick flick about girl's friendship and that inconvenience known as men.