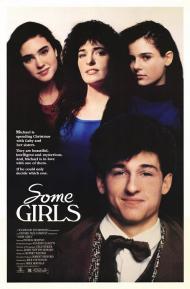 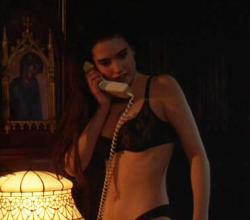 Jennifer Connelly in Some Girls.

Some Girls is one of those movies that can't seem to make up its mind what it wants to be. It tries at different points to be a romance, a coming of age story, a screwball comedy, a drama and even very briefly, a ghost story. As you might expect of any movie that tries to do so many things, it fails at all of them.

Michael, played by a young Patrick Dempsey, is invited to spend Christmas with his girlfriend's rich and eccentric family at their home in Canada. Almost immediately upon his arrival at the home, Gaby tells him that she doesn't love him anymore. Her two sisters express an interest in him and her grandmother mistakes him for her dead husband.

The family is supposed to be odd and funny, but they're really not. The father wanders around naked because he says that he can't work with clothes on. This might make you titter the first time you see him, but the "joke" wears thin. The sisters are all beautiful, but a bit flighty. The mother is religious and keeps a priest who once asked her to marry him around for company.

While the movie starts off trying to be funny, around the halfway point it shifts gears when Granny goes missing. The family heads to the old house she used to live in, because that's where she's gone in the past. While there, Michael shares a couple of genuine dramatic moments with her. The scenes with him and her seem more real than any of the scenes he shares with any of the sisters.

The script seems as though it were written by an English Major who was trying too hard. It's filled with literary and artistic allusions, but to no real purpose other than to include them. Michael quotes William Faulkner and several times we are shown famous paintings, particularly Botticelli's 'Three Graces', which is obviously meant to represent the three sisters. Rather than adding anything to the movie though, these references just come across as pretentious. Other English Majors might get a thrill out of recognizing them all, but they do nothing to make this a better movie.

There are also elements of a male fantasy in the story. All of the women in the house seem to lust after Michael as soon as he enters it. He ends up in bed at one point or another with all of them except the mother who looks as though she'd like to be in there. There are a few moments of nudity provided by the older sister Irenka and Gaby does a scene in just her bra and panties.

One of the final scenes in the movie involves a ghost which seems to come totally out of left field, as if the writer didn't know how to finish the story and so went with that idea. It's actually one of the better moments in the movie, but there's nothing that came before it that prepares you for the possibility of a ghost appearing.

It finally wraps up with Michael and the naked father discussing women and the writer saying (through the father) that he doesn't understand them. It appears that he didn't understand how to write a good movie about them either. The only novelty here is seeing a young Connelly and Dempsey together. 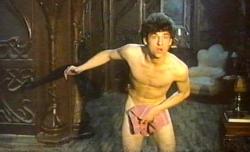 Patrick Dempsey in Some Girls.

As Scott wrote, the tone of Some Girls is all over the place. Screenwriter Rupert Walters aimed high and missed. Most writers would be content to write either a good comedy or a good drama. Walters tried to do both with the same movie. The first act plays like a French sex farce, and the second act is a weird inter-generational family-drama/ghost story/romance hybrid. The shift in mood is quite jarring. There are individual scenes that work but taken as a whole it's best described as odd.

I suppose for 1988 some of the sex scenes were quite titillating. The funniest bit takes place on Gabi's birthday when she and Michael think they've got the house to themselves. Gabi gets Michael all hot and bothered and he chases her naked through the house only to run right into a room full of guests who yell, “Surprise!” (see photo) In another scene Michael and Gabi both admire his erect penis during foreplay that gets interrupted by a phone call. Michael says, “I don't believe this.” (looks down at his penis) “Do you believe this?”

The second act features a few strangely intimate moments between Michael and Granny (played by the fabulous Lila Kedrova - Best Supporting Actress Academy Award Winner for 1964 in Zorba the Greek). At one point Michael undresses her in front of a fire to get her warm. Their unusual closeness is explained later on in the aforementioned scene with the ghost. As the movie ends it becomes clear that while Michael was affected by every member of Gabi's family, it was with Granny that he shared the most significant bond.

Patrick Dempsey does a solid job as Michael. He carries the movie, appearing in nearly every scene, right down to providing the voice-over narration. He proves equally adept at comedy and drama. Jennifer Connelly has less to do but she looks pretty doing it. But as this is Michael's coming-of-age story she is just one of the titular girls. I agree it's a novelty seeing them together at the beginnings of both their careers. Some Girls is far from a great movie but it is just bizarre enough to keep your attention. I was never sure exactly what was going to happen next. How many movies can you say that about?