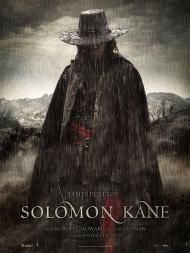 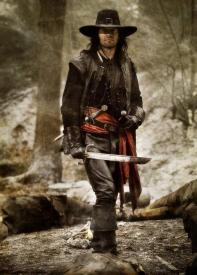 Solomon Kane is Robert E. Howard's other, less famous, creation.  Everyone is familiar with Conan, his most famous work, but the Puritan warrior Solomon Kane has flown under the radar by comparison.  Howard wrote a dozen or so stories featuring Kane and a few poems.  During the 1970s Marvel published a Solomon Kane comic series, but this is the first film version.

James Purefoy plays Solomon Kane, an English nobleman's son in the 16th century, who has turned to piracy.  When the movie opens he and his men have ransacked a town.  He is met in the treasury of the town by a dark shadow who proclaims itself to be the devil's reaper.  The reaper informs Kane that because of his actions, Kane's soul is doomed to Hell.  After a quick battle with the Reaper, Kane manages to escape.

Cut to a year later and we see a repentant Kane living in a monastery.  Determined to save his immortal soul, Kane has vowed to mend his ways and give up violence.  When he leaves the monastery and befriends a Christian family on the road who are soon attacked by satanic raiders, it quickly becomes obvious that Kane's pacifism days are going to be short-lived.  He realizes that perhaps there's another way for him to find redemption and he can use his fighting skills to battle evil.

Visually this movie is a treat to watch.  Some of the special effects at the beginning of the film are a bit weak, but overall the cinematography is excellent.  There's very much a graphic novel like, heightened sense of reality look to it all.  It's very dark and it rains a lot, but always in a way that's pleasing to the eye.

The tone of the film is very dark and it takes itself very seriously.  To my mind that's really the only way for these types of movies to be handled.  This is a world of witches, swords and sorcery.  If it were to be self-mocking or wink to the audience it would ruin the gloomy atmosphere that it works so hard to create.

Purefoy plays Kane with a haunted seriousness.  He looks like Hugh Jackman's more rugged and less pretty brother.  The part doesn't call for the greatest range, but Purefoy handles the action well and is believable in the role.  He wears the cloak and hat well.

It's the story itself that is the weakest part of the movie.  The plot is an origin story so that we see how Kane becomes what he was in Howard's stories; a hardened warrior battling Satan's minions to save his own immortal soul.  The villains of the film are fairly unoriginal and reminiscent of Darth Vader and The Emperor.  There's even a plot "twist" involving a family member of Kane's.

Despite the weak plot, this is still an enjoyable film.  It definitely sets up the possiblity of sequels and I hope they make them.  It's doubtful Kane will ever rival Conan in terms of fame, but his world is definitely one that I would be willing to visit again.

Do not let the Pilgrim hat fool you.

I do not fully understand the business that is film entertainment. I have seen and reviewed more horrible films starring major movie stars than I can count.  It amazes me that so much crap can be put into theaters yet a film such as Solomon Kane struggled to get even a limited release in the United States. Checking Michael J. Bassett's blog revealed that it was quite an effort to get this into American theaters, but not why.

As Scott wrote, Bassett, who is clearly a fan of the source material, keeps the tone of the film quite serious. Not only does this affect the fight scenes, but Kane's religious conviction. Solomon is shown praying more than once and even dedicates himself to the worship of Christ. Granted it is for the selfish act of saving his own soul. It is through his journey though that he comes to understand that he can only save his soul by saving others. During the climactic confrontation with the sorcerer Malachi, the question is posed to Kane, "Why do you care for her? You came here to save your soul." Solomon responds, "She is my soul."

The film contains many religious references. Most noticeable are the characters names, Malachi was a Jewish prophet in the Hebrew Bible. Solomon was a King of Israel and according to the Talmud, a prophet. Josiah was the King of Judah. His name translates to "healed by Yahweh". Meredith is a bit more obscure. It could be a reference to well known Biblical scholar Meredith Kline or more than likely just a variation of "Mary."

If the names do not do it for you, there is the scene where Solomon is crucified. He is about to give up and let himself die on the cross, when he hears the screams of Meredith and resurrects his determination to fight on. As Kane says, "There are many paths to redemption, not all of them peaceful." Talk about being a warrior for God.

The religious aspects of the film are not as heavy handed as I may have made it sound. I was just struck by how good Christianity was depicted in this film. It is certainly rare these days in movies. I am not sure if that played any role in companies not wanting to attach themselves to this film, but it is interesting that one of the few films to so proudly show Christianity in good light had such a hard time finding a market in the U.S..

Another reason would be something that Scott touched on. Solomon Kane is not a well known character and thus a harder sell. Add in the fact that James Purefoy, no matter how good in this role, is by no means a house hold name and you are stuck without a star to help garner attention to the film. This is all a real shame though, as Solomon Kane is a truly entertaining fantasy film that could have been a major success if it had more publicity behind it. If you like this genre, you will enjoy this film, and like me, you may wonder why it never received the recognition it deserved.

Robert E. Howard created Solomon Kane way back in 1928. He wrote about him in popular pulp novels of the day. I agree with my brothers that it's a shame the character never gained the fame or following of Conan or other pulp fiction heroes such as Tarzan. He is an interesting man and the overtly Christian angle makes him rather unique in the pulp fiction oeuvre.

The movie is well-made. It maintains a bleak and ominous atmosphere throughout. The special effects are decent without being at all groundbreaking. It also contains a few creepy scares such as the priest with his demonic flock of undead worshipers he feeds with human flesh. The witch posing as a little girl was likewise frightening.

Puritans of the 16th and 17th Centuries are seen in a mostly negative light historically speaking. This is mostly due to the Salem Witch Trials and Nathaniel Hawthorne's novel The Scarlet Letter, neither of which casts Puritans in a positive light. They are thought of as an intolerant and superstitious lot. I'm not sure if this had anything to do with the lack of box office success for this movie, I'm just throwing it out there as a possibility.

As Scott wrote, the filmmakers keep the tone of the movie somber and completely serious. In the world within the movie flesh eating ghouls, witches, and even Satan himself are all very real. The story is exciting and filled with graphic hand to hand combat scenes but it is also a bit relentlessly dreary.

James Purefoy does fine work in the title role as the reformed mercenary seeking redemption. The story, which was originally intended to be the first part in a trilogy, wraps up all its loose ends quite neatly by the time the credits roll. I have to admit that I was only vaguely aware of the character Solomon Kane before watching this movie. I enjoyed it more than I thought I would and wouldn't hesitate to check out a sequel in the unlikely event that one ever gets made.