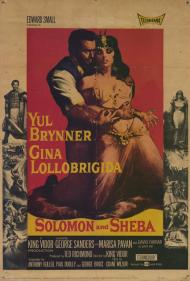 Yul Brynner and Gina Lollobrigida as Solomon and Sheba.

In theme and scope Solomon and Sheba plays like a sequel to Cecil B. DeMille's The Ten Commandments. Like that picture it marked the end of a legendary Hollywood director's career behind the camera. This would be the final movie directed by King Vidor, who, like DeMille, had been directing movies since the dawn of Hollywood. Solomon and Sheba displays the same extravagant grandeur and melodramatic style as any DeMille epic.

Yul Brynner stars as the titular King of Israel. He replaced Tyrone Power who died from a heart attack after filming a vigorous fight scene with George Sanders. Power had already filmed half the movie and he can still be seen in several long shots in the finished picture. Vidor would later criticize Brynner's performance, adding that Power had played the role more convincingly. Italian sexpot Gina Lollobrigida plays the Queen of Sheba in a gloriously over-the-top manner. She makes Anne Baxter's Nefretiri from Ten Commandments seem subtle in comparison.

Yul Brynner (with hair) and George Sanders try to out-ham each other as King David's rival sons. Although both men appear a bit long in the tooth for the roles (especially Sanders who was past 50 at the time, although Brynner had aged noticeably in the 3 years since Ten Commandments). The famously wise Solomon's most famous judgment is shown. You know the story where two women claim the same boy as their child. Solomon orders one of his guards to cut the boy in two pieces and to give each woman half. He knows the real mother will offer to give the boy up rather than see her child harmed.

In spite of the melodramatic script and stilted performances, visually Vidor created one last stunning masterpiece (the cinematography by Freddie Young is breathtaking). Solomon and Sheba is gorgeous to look at. It was expensively made and it shows. A large battle scene at the climax is particularly impressive looking. It was filmed on location in Spain in a color, widescreen process known as Technirama.

Although it was a box office hit in 1959, Solomon and Sheba was later selected for inclusion in a book called The Fifty Worst Movies of All Time. Today it can be enjoyed for its sheer spectacle -the likes of which will never be seen again- and its magnificent campiness. 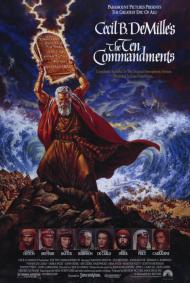