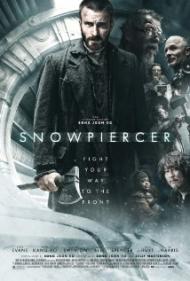 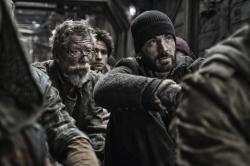 There was a time when Science Fiction was routinely about ideas. Often writers and filmmakers would take advantage of the genre to mask current events in futuristic allegories to more subtly get their message across. Modern Sci-Fi films have abandoned all that and are simply about the special effects and explosions. While there's nothing subtle about Snowpiercer, you have to give it credit for at least having ideas behind it. It's the movie that Elysium wanted and failed utterly to be. The fact that it wraps those ideas in an entertainingly surreal package is what makes those ideas work. It's the freshest thing, and one of the few non-sequels, in cinemas this summer and needs a much, much wider release than it's currently getting.

The plot is based on a French graphic novel from 1982. It's directed and co-written by South Korean Joon-ho Bong, making his English language film debut. It is set 17 years in the future following a failed man-made attempt to correct the effect of global warming. The remedy involved spraying a chemical in the upper atmosphere, with the problem being that it worked too well and the entire planet is plunged into a new Ice Age. The only survivors of this catastrophe exist aboard a train that runs on tracks that circumnavigate the planet, with the upper class living in luxury at the front of the train and the lower classes crowded in the rear, existing on protein blocks.

Chris Evans (Captain America) leads the international cast as Curtis, one of the leaders in the rear of the train. With the help of Gilliam's (John Hurt) advice, Namgoong's security expertise, and the help of an unknown ally from the front of the train who smuggles messages to them in their food, Curtis launches a revolt. He attacks those who come to deliver their food and leads his ragtag army forward through the train, facing obstacles both violent and surreal. His ultimate goal is to confront Wilford, the man responsible for building and running the train, who is spoken of in reverential and worshipful tones. Standing in his way is a small army and dozens of train cars whose contents are often visually arresting, while becoming more extreme and surreal the further along Curtis travels.

Adding to the strangeness and arthouse tone is a bizarre and scene-stealing performance by Tilda Swinton as Mason, the spokesperson from the front of the train who deals with those in the rear. The part was originally written for a man, but when Swinton expressed interest in it, Bong cast her in the role, but didn't change any of the pronouns used to refer to her. She is still called he or sir and Swinton's makeup and costume are asexual.

Looked at logically the script leaves many questions unanswered and doesn't make sense on several levels. As an example, in the original graphic novel the train was meant to be over 1,000 cars long, but there doesn't seem to be nearly so many here, which makes the idea that it is able to sustain itself and its large population seem doubtful. Answers to some of the questions do come at the film's climax, but they don't always stand-up to close scrutiny. This isn't as much of a problem as you might expect though, since the surreal nature of the story seems to be intentional.

Still, it's in the first two-thirds of the film that it works best. This portion is filled with enough stylishly filmed action that you can ignore the nagging questions that may have arisen in your mind. There's a particularly violent and exciting battle scene in a car between the rebels and guards when the train passes across a bridge blocked by ice and then plunges into the darkness of a tunnel. These moments when the goal is simple--get to the front of the train at all costs--are filled with tension that will have you on the edge of your seat. The final act though, which takes the political message that has already been delivered with a sledge hammer and moves it up to a wrecking ball, is where the film wobbles a bit. Not enough to truly mar it, but until that point I was easily going to award this film 4 stars.

When the Weinstein's bought the North American rights to the film they requested that its 2 hour running time be cut by 20 minutes, but Bong refused to make the edits. Because of his refusal they decided its potential was limited and have so far only released it in 11 theaters. Good word of mouth has spread and reportedly it will be moving into slightly wider release soon. It definitely deserves it. Although not quite perfect, it's far superior to almost every one of this summer's blockbusters. 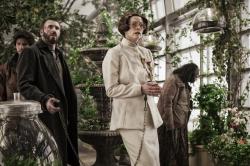 The only person deserving praise for this ridiculous movie is the set designer. The different cars on the train are clever and imaginative, visually arresting and sometimes surreal. But the story itself is so full of holes it looks like a sieve. If you merely let the film wash over you without thinking about it, it has some entertainment value, but if you give any thought to the setup the entire movie falls apart.

The concept of the train itself makes no sense. I mean why a train? They couldn't build a giant bunker instead? And who keeps the tracks in working order? I mean after 18 years of blizzard like weather you would think they might need a bit of maintenance. And the class system makes no sense either. Why even keep the lower classes aboard the train at all? We do eventually learn the reason, and it's yet another ridiculous plot point that I won't give away.

The ending is the stupidest part of the movie. The symbolic sacrifice made by the Chris Evans' character completes the idiocy of the entire movie. Although it is supposed to be somewhat of a happy ending it is as inane as everything that came before.

There are a few decent action scenes, but they are as unbelievable as the rest of the movie. The question of bullets is another blatant mistake. The train guards have them but don't use them when they need them most, for reasons never explained. The main henchman for the elite is shown being stabbed multiple times but, after laying on the ground for a while, he suddenly gets up like nothing happened.

The talented cast is mostly wasted. Other than the memorable sets the only other thing I agree with my brother on is that Tilda Swinton is a real scene stealer, in yet another androgynous role. But John Hurt, Jamie Bell, and Octavia Spencer aren't given much to do. Chris Evans does angry well enough but his melodramatic story is unintentionally hilarious. His bad acting, coupled with horrendous writing, makes the cutting off of an arm or a leg seem downright mundane, and not very dangerous.

Good science fiction movies make us believe the world they've created for the screen. Snowpiercer gets nearly everything wrong on both technical and sociological levels. I never bought into it and therefore couldn't enjoy it, but the train looks really cool. 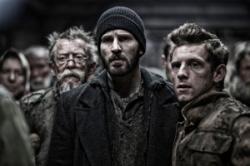 I agree with some points that my brothers make. As Scott wrote, the political message is hardly subtle. The social classes are clearly defined between the haves and the have nots. Swinton has a classic conservative line where she yells at the have nots for being ungrateful and how they suck on the tit of Wilford’s generosity.

Of course the story is going for an allegory to our real world class standings but, as usual, it gets it all wrong. This movie shows the haves as being haves for no reason other than luck and the have nots in their place because they were not lucky. That alone destroys any symbolism this movie may be going for. Our world has producers and takers. The producers have jobs or create jobs while the takers live off the producers. On this train, everyone is a taker, sucking off the tit of Wilford, for without him nothing exists.

The most common job shown is that of being a guard. The only people shown guarded are the have nots. The real question is why? I waited to discover that the “have nots” served some purpose, but they do not. They are not eaten and except for two children working in the engine, none are used as slaves, and if you thought about it, the parents would likely allow their children to work there as they are saving everyone’s life by doing it. As Patrick wrote, what is the point of keeping those folks locked up like animals? Just assimilate them into the populace or kick them off.

The only reason we are given is when Wilford says everyone has their place. It is a train; everyone is pretty much in the same place. Other than Wilford, no one is any more important than anyone else. The drug using party goers serve what purpose? The hair salon? Really!

As Patrick wrote this movie is so full of holes it is ridiculous. The train should have been shown as so very much bigger than what it is. We see one car with plants when we should have seen many. One car has sides of beef hanging in a refrigerated, not frozen, car. Have they really been holding onto that meat for 18 years?

The ending reveals that man is capable of anything when cornered and a villain one moment may be a hero the next, and vice versa. I side with Patrick on the ending. It gives a shadow of hope but then it had me wondering, with such an unhappy ending, what was the point? Scott wrote this was a better allegory than Elysium but only by a small margin.