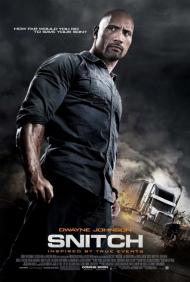 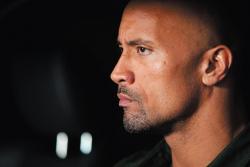 With Ric Roman Waugh, a former stunt man, writing and directing a movie, you would think it would be heavy on the action and sequences involving plenty of stunt work. Although Snitch features some of that, Waugh chose this film because it was more realistic and dramatic than so many films he has worked on as a stunt man. He also picked Dwayne Johnson to star because, as he explained in an interview with MOVIELINE.com, "...when it's real world rules, it won't matter how big you are," Waugh explained, adding: "When a bullet hits you in the head you die just as fast as the guy that's 5'6."

After an early chase scene, Snitch slows down to a family drama pace.  John is divorced from his first wife with whom they have the teenage son in question. He is now remarried and has a little girl and owns a trucking company.

The film starts to pick up when John discovers that one of his employees, Daniel, was behind bars for drug trafficking. John decides to pay him to introduce him to a dealer, with the idea that narking on the dealer will shorten his son's sentence. Things do not go exactly as planned, the tension starts to build and the pace starts to quicken.

Daniel is likewise a family man trying to make good after his criminal past. He is married with a small son. He is not at all excited to help John, as it puts him back into the business he is trying very hard to avoid.  John makes him a huge financial offer that Daniel cannot turn down and these two fathers find themselves in dangerous positions in order to help out their families.

The film increases in tension and action as it goes along, with some shoot outs and a chase on a highway. By the end of the film it moves a bit into Hollywood action mode, but at no point does Dwayne Johnson turn into The Rock and do any unbelievable fight scenes. The action scenes compliment the drama instead of dominating it.

Snitch is very much a film close to my heart. As a father of two sons, I emotionally connected to John and Daniel as they shoulder huge amounts of stress at the expense of trying to do the right thing for their families. Dwayne Johnson has a few emotional moments as he visits his son in prison and deals with a judicial system that is more interested in capturing the dealer and the political bonuses, than what happens to his son.

Snitch is a well made film with some legitimate heart, but it may not have enough action to keep The Rock's fans happy. Waugh chose him so as to place him in a more realistic setting than what we are used to, but had he put less of an action star in the role, the drama could have stood out more instead of just the expectation of when The Rock was finally going to kick some ass.