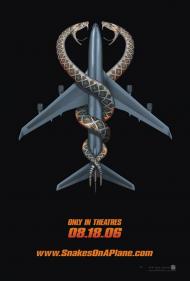 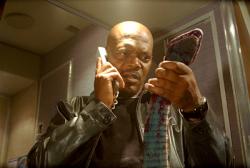 Some movies are born bad, others have badness thrust upon them. Snakes on Plane is the first movie I've heard of that actively set out to be bad. Unfortunately for them, a truly great Bad Movie can't know that it's bad, it has to think that it's actually a Good Movie for it to be truly Bad. So instead of being a Great Bad Movie, Snakes on a Plane ends up just being a fairly good Bad Movie.

I remember one time my brother Eric and I were watching a movie during which there was an overly long setup sequence that demonstrated that this character was the villain. Eric said, "You know, they could have just told me he was the bad guy and I would have believed them. They didn't need to show all of that." The reason I bring this up is because this movie opens with a scene that shows a young man witness a murder, which then leads to the FBI showing up at his door and escorting him to the airport. The movie could have and should have opened with the boarding of the plane. To paraphrase Eric, they could have just told me that this guy was a witness on his way to prosecute a mobster. I would have believed them.

The reason those early scenes aren't needed is simple. There is only one reason anyone is going to see this movie and it's not to see plot development or character construction or anything like that. It's to see Samuel L. Jackson deal with a bunch of "mother fucking snakes on this mother fucking plane!". Any scene that doesn't take place on the plane is simply wasted screen time, and considering the movie is about an hour and forty-five minutes, that extra ten minutes chopped from the beginning of the movie would have helped anyway.

Like a video game, this movie doesn't require so much plot as it does an introduction. As I mentioned, there is a witness being escorted from Hawaii to Los Angeles. The mobster he's going to testify against has come up with an original way of insuring that the witness never makes it to L.A. He's stuffed the plane to the brim with poisonous snakes of every variety. Then, he's had snake pheromones sprayed on the flowers being given out to the passengers as they board the plane, so that the snakes will go crazy and start attacking everyone.

And start attacking they do, snapping and striking at any and all human appendages that appear before them. That includes, nipples, tongues, eyeballs and yes, a penis. How many movies will you get to hear this line? "Get off my dick, you fucking bitch!"

This is a fun movie, there's no doubt about that. At times though, it just feels a little too much like marketed, carefully constructed, test-audience approved fun. 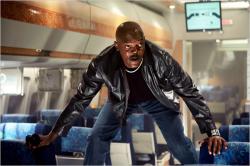 All of that may be true, but the real flaw of Snakes on a Plane is that we, the audience, really do not care who lives or dies. Almost none of the characters in the movie have any discernable personality traits. The ones who do, the germ-a-phobe hip hop singer and the snobbish Brit, are completely unlikable. Without any character to like or feel any concern for leaves the audience a disinterested voyeur. It's like when people slow down at a accident to see if it's someone they know. If it's not then they move on with their day.

The beginning of the movie, that Scott complained about, could have actually helped the movie if it was better used. It could have given some personality to Jackson's character. As it is, he is just a generic cop/hero. The one character I started to connect with was the nervous newlywed. He tells his bride that he chose to “fly” to Hawaii, even though he is scare to fly, because he wanted to go there for her. Finally, I thought, someone I can root for to live. But they have very small roles and the camera spends too much time on the rest of the vacant cast.

Anyone who ever decides to do a disaster movie should watch Titanic. The secret to it's success was that it drew us in with Jack's and Rose's relationship and then hit us with the actual disaster. Instead of having the ridiculous, opening action scene where Jackson bravely shoots two men but then decides to run when there is only one left, the movie could have shown Jackson or Margulies or that newlywed couple doing something that would endear the audience to them so when they came to fighting for their lives, the audience would actually give a damn. 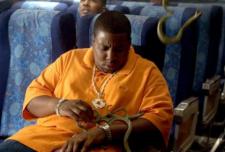 File this one under forget.

They needed to: a) treat the subject matter much more seriously, as Scott mentioned, thus making it unintentionally funny and therefore a truly great Bad Movie or b) gone in the very broad parody direction and been intentionally funny; either way would have been an improvement.

Just hearing Samuel L. Jackson deliver its signature line, as great as he says it, is not enough to base a movie on. Although that seems to have been the case. I agree with every criticism my brothers mentioned and will just add that the CGI snakes look pretty fake and they behave unlike any real reptiles known to exist. Motherfucking file this one under Motherfucking Forget!