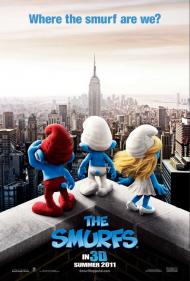 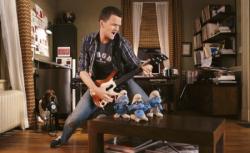 Neil Patrick Harris and a little Rock Band product placement in The Smurfs.

The makers of this movie could have aimed it at grown-ups who were fans of the Smurfs when they were kids, or at least have included some slightly more sophisticated humor that acknowledged those fans. Instead they chose to aim it strictly at very young children with nary a bone thrown to anyone over the age of around five.

For those unfamiliar or who have forgotten, the Smurfs are little blue magical creatures who live in an enchanted forest and are constantly harassed by their nemesis, the inept wizard Gargamel and his cat. Each of the Smurfs has a distinctive personality trait from which they get their name. They were created in 1958 by a Belgian cartoonist named Peyo (who receives a nod in the film as the writer of a history of Smurfs), but were brought to fame in the United States by the cartoon in the 1980s.

While there are 100 Smurfs in the village, this movie focuses on a small group of them. There's Papa Smurf, the leader, Smurfette the only girl and then the aptly named Gutsy, Brainy, Grouchy and Clumsy. They find themselves chased through a magical portal by Gargamel and find themselves in New York City. They take shelter in the apartment of advertising executive Patrick and his wife Grace. They just need to figure out a way to get back to their own world before Gargamel catches up with them.

Somehow it took four people to write this script. If I tell you that the two of the writers also wrote this year's Zookeeper,  and the other two wrote Daddy Day Camp and Are We There Yet?, you'll probably have a pretty good idea of the level of humor here. There's nothing clever or witty. The jokes are all slapsticky and cartoonish and involve a lot of running around and falling down. A chase scene through FAO Schwarz is a big set piece in the middle of the movie and also contains one of the few moments I truly laughed, when Smurfette discovers that it's possible to own more than one dress.

Likable Neil Patrick Harris and Jayma Mays manage to not look embarrassed while sharing heartfelt and earnest moments with little blue creatures. There's a subplot involving Harris trying to get an ad campaign approved and launched, but that's just an excuse to give a backdrop to the antics. Azaria hams it up as Gargamel. His best moment, if I were forced to chose one would probably be his use of steam to make dramatic entrances.

The Smurfs are voiced by a bevy of famous actors, but none of them bring all that much to their parts. From the I didn't even know he was still alive file comes Jonathan Winters as Papa Smurf. Alan Cummings sounds like Mike Meyers doing Shrek as the added for the movie Smurf, Gutsy. And Katy Perry plays Smurfette, making a reference to herself with the line, "I kissed a Smurf and I liked It."

To be fair, the children in the audience I saw this with seemed to enjoy it well enough. A little boy of about five proclaimed it to be "Awesome!" to his dad on the way out. It just would have been nice if they'd aimed it more for the whole family instead of strictly for the kids. Still, it's mostly harmless and innocent fun, just don't expect any sort of level of sophistication. 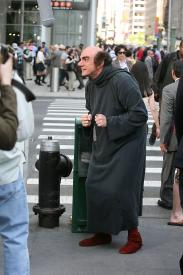 Hank Azaria as Gargamel, in The Smurfs

I remember when the show was popular, but I hardly ever watched it.  Thus, I was not bothered by it not following the show's premise.  The Smurfs is a harmless fun film for the five year olds and under. It also has a nice message about family and sticking by each other.

It is aimed at children but a few bones are thrown to the adult.   Five year olds would not get the Marilyn Monroe reference? You would have to be older than five to get Katy Perry's in joke.  The funniest character is Gargamel.  The children and the adults laughed at him.  He likes to make dramatic entrances walking through steam escaping from the street.  When Odile first meets him she thinks his name is Garbage Smell.  The funniest scenes are when Gargamel throws his cat into the unknown and sheepishly asks, "Azriel, are you dead?"

As Scott noted at his theater, this movie seems to be a hit with children.  I saw this at a local theater that is normaly dead on a Tuesday, but today the place was packed with little kids.  The Smurfs clearly works for its core audience, but the writers were not up to the task of expanding the script to appeal to adults. 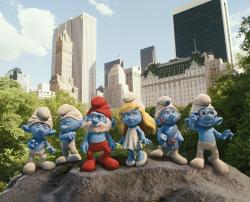 The Smurfs in Central Park.

The Smurfs may be a hit with the kiddies but believe me for anyone who hasn’t crayoned a coloring book in the past year this is a smurf-awful movie to sit through. The jokes are pretty lame and filled with gross bodily functions and bathroom humor.

These include Azriel disgustingly hacking up a fur-ball containing Smurfette’s hair, Azriel licking his own butt, Gargamel publicly urinating into an ice-bucket before handing it to someone to empty and Clumsy Smurf falling into a toilet bowl. If the above jokes sound funny to you then by all means rush out to see this movie.

The smurfs themselves are absolutely adorable and impossibly cute. I understand their little blue appeal to children and I will say that the story does improve slightly as the movie goes along. They even manage to impart some emotion into the proceedings when Papa Smurf shares a heartfelt scene with Neil Patrick Harris where they talk about parenthood.

I accused my brother Eric of doing a throw-away review for this movie. I now understand why. It isn’t interesting enough to warrant spending much time on. However if you are a five-year-old child (and a smart one if you are reading this review) then I’m sure you found this movie to be smurf-tastic, smurf-errific and smurf-tacular.