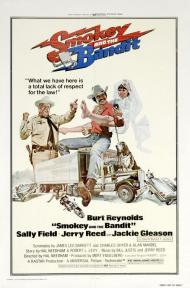 Sally Field and Burt Reynolds in Smokey and the Bandit.

Smokey and the Bandit is a screwball comedy on wheels. It was a smash hit in 1977. So much so that two sequels soon followed and its success inspired the similarly styled Cannonball Run movies. Burt Reynolds and Sally Field were THE quintessential All American 70's couple and their appeal was never more engaging, more endearing, than here.

Reynolds, as the Bandit, smirks and charms his way through the movie. His devil-may-care, southern, good-old-boy is pitch perfect. Like the great stars of the past, he gives you the distinct feeling that you are seeing the true Burt Reynolds. He's not acting so much as being. Field on the other hand, is acting. I don't think she's really much like aspiring hoofer Carrie at all. But she makes Carrie's plucky naiveté seem effortless, as great comic actresses do. Together Sally and Burt, in that sexy black Trans-Am, are a classic comedy team.

The plot is merely an excuse for the many car chases and gags that comprise the story, which is about Bandit and Snowman (Jerry Reed) attempting to win a bet. They have to drive from Georgia to Texarkana, pick up four hundred cases of Coors beer, (an early example of product placement) and deliver it back in Georgia within twenty-eight hours. Along the way they pick up escaped bride Carrie and get chased by the jilted groom's father, a Texas sheriff; one Buford T. Justice, hilariously played by the great Jackie Gleason.

He does the funniest send-up of a redneck sheriff ever. He calls everyone, "Sum'Bitch" and keeps announcing his name to everyone he meets. He is audaciously racist in a way that would never get onscreen in these politically correct times. Many have attempted this stereotype, before and since, but none have done it better.

This movie also stands as a great time capsule of the late 1970's, when cars were still made in Michigan and the CB radio was king. When men had sideburns and mustaches, women went braless, and everyone wore skin tight jeans. It was also a patriotic time, America's Bicentennial happened the previous year, note Jerry Reed's American flag patch on his vest.

More than anything else, the real charm of this movie is that it is not pretending to be anything other than what it is. A fast-paced, chase-comedy executed with cleverness and style.

Sally Fields, the Pontiac Trans-Am and Burt Reynolds in Smokey and the Bandit.

Smokey and the Bandit is now 35 years old. As Patrick mentioned, it's a time capsule of the late 1970s. 1977, the year it was released, featured many iconic movies of the period. Along with this one, Star Wars, Saturday Night Fever, Close Encounters of the Third Kind and Annie Hall all came out that year. It was a huge hit upon its release, earning over $125 million in a time when the average price of a movie ticket was a mere $2.25.

Despite the passing of so many years, this movie hasn't lost all of its charm. In fact, the nostalgia factor has in many ways, added to it. It's passed through the phase where it was simply out of fashion and has now safely become a classic of the era.

Although it's all lightweight and fairly enjoyable, the success of the movie really rests on the performances and charms of Burt Reynolds and Jackie Gleason.

Reynolds has never been the greatest actor, but he has done serious acting in other movies. This, however, will always be his most iconic role and it's due entirely to his smile, his laugh, his 1970s good looks and his easygoing charm. As Patrick said, it doesn't look like he's acting at all. He's simply having a good time and he's taking the audience along for the ride.

Gleason's Buford T. Justice is a stereotype that has been done over and over, but, again agreeing with Patrick, this is the definitive version of the redneck sheriff. Anyone attempting to play a character like it will inevitably be compared to Gleason.

Fields is cute and never more adorable, while Reed makes for a good sidekick, but they are definitely playing second fiddle to the two stars.

Sure, the comedy is silly and often quite dumb, but it's all kept so light and moves so speedily along that it doesn't matter. Reynolds is always on hand to give a wink to the audience to smooth things over.

The one thing that is remembered even more than Reynolds is, of course, the black Trans-Am. In case just watching the movie and seeing the clothes doesn't make you realize how much time has passed since it was released, maybe this will drive it home. That black Trans-Am, which became the coolest car on the planet for a short time, cost just $7,000 brand new in 1977.

Mike Henry and Jackie Gleason in Smokey and the Bandit

Earlier this year my, son and I caught Need for Speed (2014) in theaters. One particular scene had Aaron Paul, driving a hot European sports car, cruise past a black Trans-Am driven by an older man. Although my twenty year old son did not know the reference, I smiled at the Smokey and the Bandit joke. As my brothers wrote, this movie is from another generation, and perhaps it is my age but I prefer the light hearted, light weight tone of Smokey and the Bandit to the too serious to take serious Need for Speed.

My brothers both commented on Burt Reynolds’ charm and it is his greatest strength. His role calls for little more than driving a car and smiling insistently. He is not given all that great of lines but his cockiness and likability make the material slightly better. After Sally Fields says to Reynolds, “You have a great profile.” he smiles back, “Yeah, I do, don't I? Especially from the side.” When Fields go on and on about how exciting jumping the car was and says excitedly, “I wanna jump something!” Reynolds says, “Then jump me!” Wink, Wink.

For me, the real star of the movie is Jackie Gleason as Buford T. Justice. As my brothers wrote, he set the cinematic standard for redneck sheriffs. I enjoyed his rude comments to his grown son, played by Mike Henry. “There's no way, no way that you came from my loins. Soon as I get home, first thing I'm gonna do is punch yo mamma in da mouth!” When Henry whines, “My hat blew off, daddy.” Gleason responds, “I hope your goddamn head was in it.” When stopping at a restaurant, Henry asks Gleason to get him hushpuppies. Gleason responds, “We got no time for that crap! Dumb sumbitch.” Buford T. Justice is not completely heartless toward his son. He is helping him to get his bride back after all, and before driving under a large truck, he yells to Junior, “Duck, or you're gonna be talkin' out yo ass!”

Like Reynolds, Gleason makes the most of his lines. The difference being that Buford T. Justice has much funnier ones. Talking to Reynolds on a CB, Gleason says, “My handle's Smokey Bear and I'm tail-grabbin yo ass right now!”  His colorful colloquialisms are the best parts of the movie. Some of his best lines are, “This happens every time one of these floozies starts poontangin' around with those show folk fags.” And, “Nobody, and I mean nobody makes Sheriff Buford T. Justice look like a possum's pecker.”

Although Gleason and Reynolds dominate this film, I must comment on Sally Fields. Although now known more for her dramatic work than comedies, she does have a grasp of the easy going tone of the film. One of her first lines, “Does this thing move?” is spoken to Reynolds just after getting into his car. Her character loosens up and she becomes more likable and attractive. In fact, this is the most beautiful I have ever seen Sally Fields look, except for perhaps when she posed for the cover of the March 1986 issue of Playboy.

Smokey and the Bandit has all the depth of a tire tread but it races along without a care in the world. As Patrick mentioned, there are some politically incorrect jokes and thank God too. Just go along for the ride and enjoy the mindless, tensionless fun. Is that not how all road trips should be? 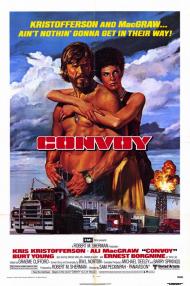