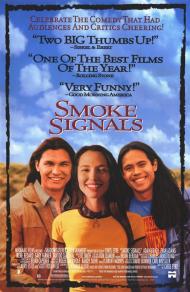 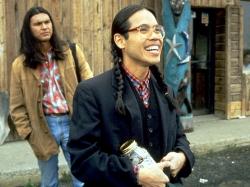 Smoke Signals is an independent film that made the festival rounds in 1998. On a 2 million dollar budget it eventually grossed more than 6 million dollars. It was the very first film to be written, directed and co-produced by Native Americans. The theme of this dramedy is the relationship between fathers and sons. It is set on the Coeur d'Alene Indian Reservation in Idaho.

The movie is narrated by Thomas Builds-the-Fire. It begins with a story that happened on the Fourth of July in 1976, when Thomas and another boy named Victor Joseph were infants. After a rowdy party, the house Thomas and his family were sleeping in caught fire. Everyone in it perished except Thomas who was tossed to safety from a second story window into the arms of Victor's father.

The story continues ten years later when Arnold (Victor's father) leaves his wife and son because of his constant drinking and resulting domestic abuse. In the present (1998) Victor has become a bitter young man whose only recreation is playing basketball. Thomas is a nerdy Indian. He wears his hair in braids, dresses in a preppy looking suit, and has seen Dances with Wolves many times. Victor and Thomas are lifelong frenemies, connected by the fire that so tragically impacted both their lives as infants. As Thomas explains it, “Victor and me, we were children of flame and ash.”

When word of Victor's father's death in Phoenix (yes, some of the symbolism is that obvious) reaches them, Victor and Thomas begin a road trip to retrieve his ashes and belongings. This will prove to be a cathartic adventure that reveals secrets and heals long festering emotional wounds.

Smoke Signals combines the comic with the tragic in a unique manner. Most of the humor is generated by the quirky personality of Thomas. Here's a snippet of conversation between him and Victor. Thomas: “Hey Victor! I'm sorry 'bout your dad.” Victor: “How'd you hear about it?” Thomas: “I heard it on the wind. I heard it from the birds. I felt it in the sunlight. And your mom was just in here cryin'.”

Although much of the story is kept lighthearted, even when dealing with tragedy, the underlying tone is somber. Thomas Builds-the-Fire's final narration sums up the movie's theme beautifully and leaves the viewer with much to ponder...