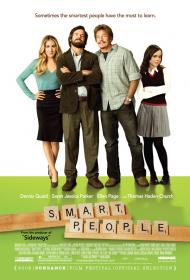 Smart People deals with an unhappy middle aged man coming to terms with his life. Lawrence is a widower. He is a college English professor who cares little for his job. He is frustrated by his manuscript being rejected by another publishing firm. He and his son have very little connection. His daughter is a highschool senior who cares more about grades than a social life. Into his depressing world comes his slacker step brother, Chuck. Lawrence also meets and starts dating a doctor who was once one of his students.

Throughout the movie everyone is desperate for some validation of their intellect. Lawrence wants his book published, and to be head of the English department, even though he knows he will not enjoy the position. His daughter, Vanessa, wants the perfect SAT score. The doctor still disagrees with him on a grade he once gave her.

Lawrence and the doctor hook up, but their relationship creates more problems than it solves. Chuck gets high and drunk with Vanessa, causing another problem. They almost all seem miserable. At one point, Lawrence says to his daughter, “I don't think you're very happy Vanessa.” She responds, “Well, you're not happy. And you're my role model.” I would have liked to have seen more interaction between Lawrence and his son. He has some daddy issues but is otherwise the only character who seems to be remotely happy.

Vanessa is easily the best character in the movie. Page plays a smart mouth know-it-all variation on Juno, only Vanessa is a conservative. The movie never gets political. It only seems to mention that she is a member of the Young Republicans so as to demonstrate that she is socially retarded. As everyone knows, conservatives are just a bunch of uptight folks waiting for some liberal to come along and get them stoned. Although Vanessa never changes her opinions, the movie spares no expense at making fun of her. She gets called “a bitch,” “a monster,” “self absorbed,” “an android,” “a narc,” “a scary clone” and “a 17 year old robot.”

Quaid does some good work here. He plays a man looking for happiness, but never sure how to find it. He is still hurting from his wife’s death and cannot bring himself to move on. Quaid wears a fake stomach throughout the movie. It hangs over his belt as if life is dragging him downward.

Parker is a mystery to me. The more I see her of her films, the less I get her charm. Church stumbles through the role much as he did in Sideways. He is also in danger of being typecast. The funniest line on the entire DVD can be found in the out takes when Ellen Page is doing a scene with Church, she says incredulously, “You were nominated for an Academy Award?”