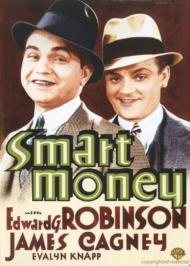 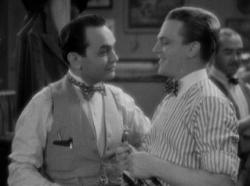 Smart Money was the one and only time Edward G. Robinson and James Cagney appeared in a movie together. Robinson was fresh off his success as Little Caesar while Cagney's breakthrough picture Public Enemy hadn't yet hit theaters. Not surprisingly then, Cagney is in a supporting role to Robinson, who plays his usual big-mouthed, ethnic (he's Greek), alpha-male character.

Robinson is Nick the Barber. He's a big shot in a small town with a reputation for being lucky. He'll bet on anything and Nick the Barber always wins. One day he gets the idea of going to the big city to get involved in a high stakes poker game. His gang of fellas from the barbershop stake him to 10,000 samolians and Nick the Barber is soon on his way to the big time. He has just one weakness however, blondes.

In the city Nick learns fast after being cheated by a group of card sharps. He rises quickly to the top of the gambling heap and before long has caught the attention of the District Attorney. Along the way he crosses paths with a series of blonde dames and gets double crossed by all of them.

Jame Cagney plays Nick's roommate and best pal named Jack. He definitely plays second fiddle to Robinson but still manages to bring some trademark Cagney excitement to the part. In one scene he pantomimes what appears to be a sex act while communicating to Nick that one of his blondes is waiting outside for him. He also gets to demonstrate his skills at fisticuffs in one scene although Jack isn't his usual tough as nails hood.

In what was a fairly common theme in pre-code movies there is a homosexual subtext to Nick and Jack's relationship. They are grown men that share an apartment for starters. In an early scene Nick complains to Jack that he is wearing his tie and then asks sarcastically why he didn't put on his new checkered suit as well. Jack replies, “It didn't fit.” Later on Jack (who appears to dislike dames) complains about the presence of a blonde at their apartment, demanding to know, “how long is this gonna last?” Nick's reply pretty much seals the deal, “She'll be gone in a couple of days, and then you can be my sweetheart again dearie.” Jack then playfully fake punches Nick. (Oh and did I mention that Cagney's red hair photographs as blonde?)

SPOILER ALERT: When Nick accidentally kills Jack he cries over him like he just lost the love of his life. Which brings up the rather odd ending. Up until then the movie has a fairly light tone. It isn't particularly violent or dark. The ending is a bit of a downer though.

Smart Money also features another movie legend early in their career. Boris Karloff gets one scene near the beginning. He wasn't even billed though as this was a few months before Frankenstein would make him a household horror name. Bespectacled character actor Charles Lane made his movie debut here playing a hotel clerk for the first but certainly not last time. He continued acting into his 90s and passed away in 2007 at the age of 102.

Smart Money crackles with early 30s movie slang. Unfortunately this includes sexist, racist and antisemitic comments. Robinson calls his blondes things like “cute little tricks” and he makes a crack about a horse with a Jewish sounding rider winning, “by a nose”. He also pats a little person for luck as he walks by him on a train. But worst of all is the patronizing manner in which he treats black men. He calls one “Suntan” and constantly rubs his head for luck. On a train he gives a black porter half a bill as a tip and tells him, “You'll get the other half at the end of the line, if you're a good boy.”

Director Alfred E. Green keeps things moving. He makes good use of subtitles to set the various scenes. But ultimately Smart Money is just a run of the mill Warner Brother's Picture that would have been long since forgotten without the electrifying personalities of Edward G. Robinson and Jimmy Cagney.