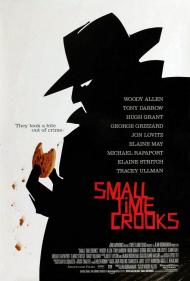 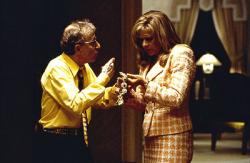 Woody Allen has been making movies for a long time. The first one I saw in the theater was A Midsummer's Night Sex Comedy in 1982. Since then I have seen, while in theatrical release, Zelig in 83, Crimes and Misdemeanors in 89, Scenes From a Mall in 91, Husbands and Wives in 92, Antz in 98 and Small Time Crooks this year. This is not even close to half of his output during those years, yet as prolific as the man is, it never comes across as blind ambition, but as someone who simply loves to tell stories.

This time around Woody is in his mass appeal, just be funny, mode. Something he has only done lately in other people's films. Small Time Crooks is funny and Woody proves he can still write intriguing and complex stories of people caught in fantastic, yet somehow believable situations. But it is his characters and supporting cast, as usual, stealing the show.

Tracy Ullman is her reliably brilliant self. Both Hugh Grant and Elaine May shine in wonderfully appropriate roles, as does Michael Rappaport. Most notably in the scene where he tells Woody's character to turn his miners hat around because it's more fashionable backwards.

At its center, this is a film about what people want out of life in terms of taste and social position; and, more importantly, what they are willing to compromise for love. 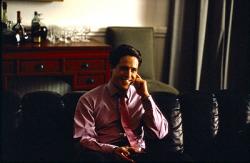 I was standing in a long line one time, when I heard a guy behind me say how much he hated Annie Hall. He then proceeded to try to explain to his very bored looking date, just where it was that Woody Allen went wrong in his making of that film.

It seems that everyone has an opinion about Woody Allen. And sadly, at least in recent years, those opinions have been based more on his personal life than on the quality of his films. I would like to think that a movie as funny and innocent as Small Time Crooks would be able to change the minds of those who don't care for Woody's films, but I don't think this will happen.

For those fans of Woody's, and those people willing to give his movies a chance, go see this movie. It's not his best work, it's a little light, but it is very funny and features, as Patrick pointed out, a great supporting cast. 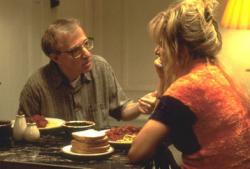 Woody Allen has always been great at using irony in his films. In Annie Hall, Alvi Singer goes to great lengths to educate and encourage Annie only to lose her because of the very encouragement he gave her. In Small Time Crooks irony is put to use in a wonderful way, Its just to bad the movie had to abandon it so early on.

In this movie Allen and Tracy Ullman play married criminals who plan to rob a bank. Allen and his cronies attempt to tunnel from a cookie shop, fronted by Ullman, to a bank and rob it. Irony steps in and the robbery fails and the cookie shop does incredible business.

That part of the film is great. But this is only 1/3 of the way through. The rest of the movie is about how the success of the cookie shop and earning so much money so quickly plays havoc in their relationship. The tone of the movie changes and the jokes seem to get forgotten.

Allen attempts some actual acting here. He puts on a bit of a Goodfella accent. Tracy Ullman is as good as ever. Someone in Hollywood needs to realize just how talented she is and give her an Oscar winning part.

Nice moral lesson about money not bringing happiness. But do we really need moral lessons from a guy who married his step daughter?