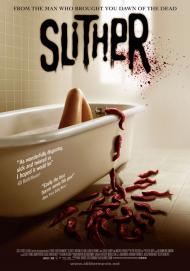 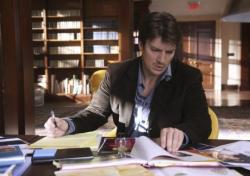 Slither is reminiscent of those old invasion from another planet movies of the 1950s; one of the major differences being that Slither is trying to be funny, where those movies were only unintentionally so, another way in which it veers sharply from its predecessors is in its gore and special effects. You just didn't see people being sliced down the middle and their guts slowly ooze out and plop on the ground in the old days. This is not a comedy for the weak-stomached.

Nathan Fillion, of Firefly fame, stars as the Police Chief of a small South Carolina mountain town. A meteor strike in the woods outside of town deposits an alien slug that when approached by a local, fires a quill that burrows its way into the unfortunate man, where it begins a transformation in him. And later, when the local impregnates one of the townswomen, she gives birth to a whole horde of little baby slugs that sweep across the small town infecting the entire population, except for Chief Pardy, Starla Grant (Banks); the wife of the first man infected, and a young teenage girl whom they pick up along the way. It's up to these three to some how put an end to the alien menace before it spreads outside of town.

That's part of what makes this movie work. These aren't superheroes by any stretch of the imagination. They're just regular people reacting as you or I probably would to a trying situation. Fillion as Pardy excels at playing the small town sheriff out of his depths but trying to save the day anyway. The anti-climax of his big plan to kill the lead alien is one of the movies' best moments.

Banks is also quite good as the wife trying to ignore the fact that her husband is being transformed into an alien slug. It's only the chopped up remains of local pets in her basement that forces her to accept the truth.

Along with the humor there are genuine moments of tension and other moments that will make you squirm. Perhaps the most squirm inducing moment comes when the teenage girl is taking a bath as the alien slugs slime around the edges of the tub before slipping into the water.

There have only been a handful of horror comedies that actually worked. Tremors and Shaun of the Dead are probably the best of the genre. Slither can definitely join their ranks. 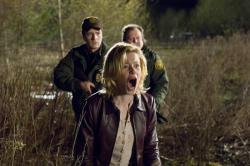 Yeah, I laughed out loud when the girl was singing The Crying Game at the kareoke bar and the foul mouthed Mayor killed me every time he spoke, “Move the fuck out of the way cocksucker!” But it lost it's sense of humor about half way through. What's left are lots of gross scenes, like when a very, very bloated woman explodes. Usually these scenes contain one of the characters saying something unoriginal like, “That's some fucked up shit.” This is a comedy horror, but it runs out of jokes far too fast. When a man in a respectable profession, like the mayor, swears it can come across as funny, but when everyone else is reduced to just swearing as a punch line, it loses it's humor.