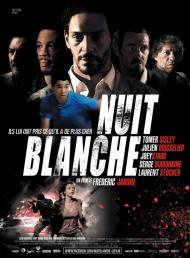 The French film industry has been gaining an international reputation for its action movies. Much credit for this belongs to Luc Besson, who has worked on such films as La Femme Nikita, From Paris with Love, The Transporter, Taken and District B13. Although he did not direct, write or produce Sleepless Night (Nuit blanche), you can see Besson's influence all over it.

Vincent is an apparently rogue French policeman who we meet early on stealing a bag filled with cocaine in the middle of the day. During the robbery, Vincent gets wounded, but he has little time to heal as shortly thereafter his teenage son Thomas, is abducted by the drug dealer's goons. A deal is then made that the drug dealer will exchange his son for the drugs. What follows is a Taken type action film that plays out in less than 24 hours.

The exchange is to take place in a nightclub that fronts for the drug dealer's headquarters. Vincent arrives at the club, followed there by two Internal Affairs officers. Before meeting with the drug dealer, he hides the bag in the men's room ceiling. One of the internal affairs officers sees him hide it and takes the bag and places it in the women's bathroom.

What follows is a non-stop action piece with one fight coming after another. Vincent gets chased all over this club/restaurant/bar as he searches for the drugs and his son. The club seems to have all kinds of hiding places, some packed with people and some conveniently empty. In one scene he hides on the dance floor as all the partying dancers move to Queen's "Another One Bites the Dust."

Sleepless Night never lets up, with a pace that dares you to look away. Some of the fights are quite extensive and very well choreographed. None are over the top, keeping it all very tense. The only flaw being that no one at this club ever thinks to call the police when they hear and see gun fire. Most of the fights happen in front of other people yet still no one reacts as if they should leave or call the authorities.

Such blatant disregard for reality has become a very common action film faux pas, and as such, we can easily over look it. Erase that from the film and Sleepless Nights is one of the best action films I have seen in a long time. It has some minor twists and just when you think it is over, it gets even better. This is what A Good Day to Die Hard should have been. 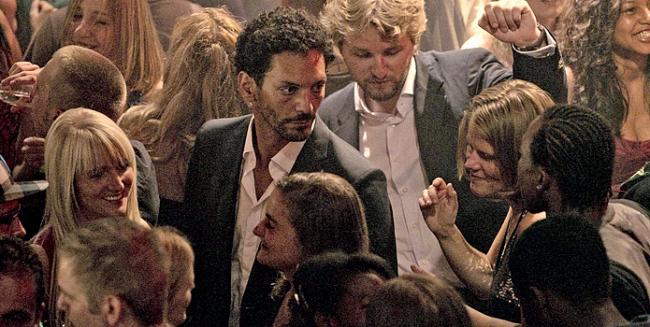 Action movies aren't really my thing but as far as they go Sleepless Night is a pretty good one. It is stylishly shot, swiftly paced and the fight scenes never go too far. Compared to most computer generated superhero movies the fight scenes in Sleepless Night look incredibly realistic. One brutal battle in the nightclub's kitchen is particularly well executed. No one runs up walls or spins around in mid-air to avoid a bullet. It's just two men beating the shit out of each other with whatever kitchen utensil is handy.

Tomer Sisley did all of his own stunts as Vincent. Vincent is a memorable character. He's a classic antihero. He claims to be working undercover but he has no qualms about breaking laws and even killing people. But beneath the tough exterior you just know there beats a noble heart as evidenced by the fact that he is willing to sacrifice his own life in attempting to save his son.

The nightclub makes a great setting for the story to unfold. It's a set built specifically for this movie and not a real nightclub. Eric mentioned the many different rooms and hiding places. The cat-and-mouse game between the two restrooms with the bag filled with cocaine is a nice touch. Vincent has bad luck from the beginning. Or maybe that just wasn't a very smart hiding place.

Samy Seghir is also pretty good as Vincent's son Thomas. He's not the most likable of people. He's sullen and a smart ass, which makes him a believable adolescent. Thomas's mother is getting remarried and soon they will be moving away. But first Vincent must save his son from some really bad guys. Sleepless Night is far from perfect, but if you don't dwell on the details too much, you're sure to enjoy the action and relentless pace.