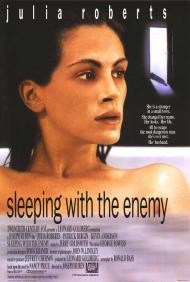 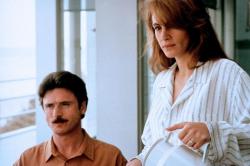 Patrick Bergin and Julia Roberts in Sleeping with the Enemy.

Sleeping with the Enemy is a trashy psychological thriller with an iconic ending. Julia Roberts solidified her status as the top female box office star in the world as a young housewife on the run from her deranged husband. Although it received mostly bad reviews, Sleeping with the Enemy was a huge hit, knocking Home Alone out of the top spot and earning back more than eight times its production cost. It may be a shallow B-movie, with characters as transparent as paper lanterns, but it's a well constructed domestic abuse thrill ride starring the greatest movie star of her generation.

I like the way the movie begins. No time is wasted on back story, we simply witness Laura Burney's final day of marital captivity. Her cage might be a big old beach house on Cape Cod but it's a prison nonetheless - and her warden is an abusive, jealous, prick with OCD. That evening Laura disappears from a sailboat during a storm. Her husband assumes she is dead but the audience knows better. We see her surreptitious return to the house to retrieve a bag of stuff she had already packed in anticipation of this day. Clearly she was planning this prison break for many months. Laura disguises herself, changes her name, and moves to Iowa. She makes a clean getaway except for one thing. Her one mistake is flushing her wedding ring down the toilet. You just know that that rash decision will come back to haunt her.

Speaking of haunting, the score by Jerry Goldsmith is dramatically so. It really suits the storyline, particularly during the climax when Laura is afraid to open the kitchen cabinet to see if the canned goods have been neatly rearranged (an obsession of her husband's). Several other pieces of music are used to good effect as well. The Van Morrison pop classic “Brown Eyed Girl” is played in its entirety to represent Laura finding a happy safe place. On the flip side, a classical piece by Hector Berlioz becomes a theme to rape. Early in the movie Laura's husband has sex with her while listening to it as she closes her eyes and bears it.

The people in this film aren't flesh and blood humans, they're stereotypes. Laura is the absolute picture of the innocent but resourceful young woman. She's a victim with a capital V. Patrick Bergin as Martin Burney is the devil himself. He's tall, dark and handsome, and a complete psychopath. He's not a person so much as the essence of evil. Kevin Anderson as the boyfriend Ben, is given no personality. He's simply meant to represent all those “nice guys” out there. And Laura is one damsel in distress who can rescue herself, thank you very much.

Sleeping with the Enemy is quite old fashioned. Laura Burney is a part Bette Davis would have loved to have been able to sink her teeth into. The direction and pacing (It's less than 100 minutes long) are also reminiscent of 1940's film noir. There's nothing subtle about this movie but Julia Roberts is 100% convincing in the lead. And it contains one of the single greatest cheer inducing lines in movie history, “Come quickly. I've just killed an intruder.”

Sleeping with the Enemy may not be art but it sure is trashy entertainment. 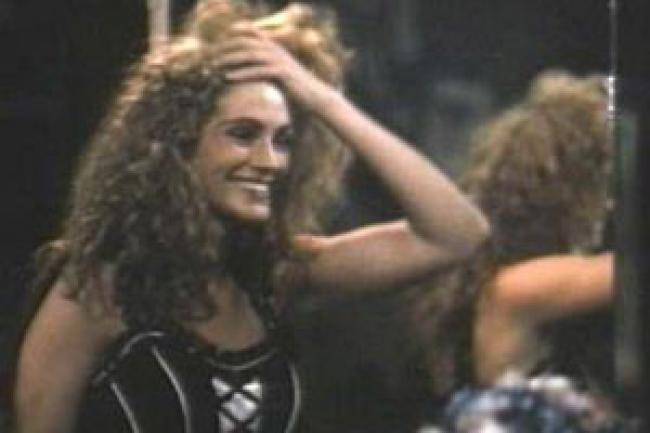 Julia Roberts in Sleeping with the Enemy

I likewise thought that Bette Davis could have done wonders with this role, even if she was not half as attractive as Julia Roberts. If you know her work you can easily picture and hear her in the scene where Laura shows a little backbone early on. Over dinner, Martin brings up the last time Laura tried to leave him. “You sneaked off inexplicably; need I remind you how I worried?” Laura answers, “No. You reminded me enough the night I came back.” Martin feigns innocent, “You're not suggesting I enjoyed that?” Laura sarcastically responds, “God, no. That would make you a monster.”

Also as Patrick noted, the characters are one dimensional. There is the villain, the heroine and the would be hero. Not only is Laura the picture of resourceful innocence, she is shown as being completely perfect in every way. Not only is she a pretty woman but a gourmet cook with a loving disposition. She is never given a single flaw in any way shape or form.

Martin Burney is nothing more than a stereotype. His habit of abusing Laura and then apologizing the next day is classic spousal abuse action. Although Martin is completely unlikable, he is the most interesting person on screen. Even though he abuses her, Martin truly loves Laura. His insecurities and personal demons, whatever they may be, drive him to control his wife by every means he can.

Ben is the least realistic of the three. He is a nice guy but also a bit odd. He knows that Laura is using a fake name just because she did not answer him when he called out her name in a public place? He knows that Martin is in the house because Laura looks upset and if he busts through the door he will be able to tackle Martin? Is this guy psychic or stupid? If he truly thought Laura was in danger, why did he not just call the police?

Sleeping with the Enemy is paint by numbers and the characters lack any real depth. Still, it makes for an easy watch, thanks largely to Julia Roberts. This was the movie to prove that she was a bankable star. Roberts is absolutely gorgeous here, whether she is dressed up for a party or wearing a summer dress. The scene where Kevin Anderson dresses her in theatrical costumes while “Brown Eyed Girl” plays, is there to show that Laura has found happiness but it also demonstrates Roberts’ screen charm. No other actress has ever built such a career on a smile and a laugh. Note that one of the hats that Roberts takes off looks very similar to one in An Officer and a Gentleman (1982), that Debra Winger takes off of Richard Gere, Roberts Pretty Woman (1990) co-star.

Sleeping with the Enemy is an average thriller, at best, but a must see for Julia Roberts fans.