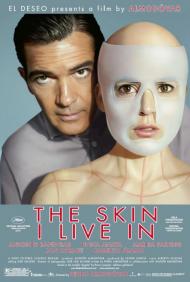 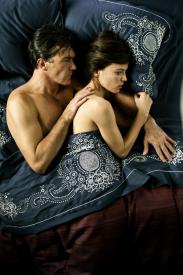 It’s been 21 years since Antonio Banderas and Pedro Almodóvar last worked together on a movie. That film was 1990’s Tie Me Up, Tie Me Down. Spain’s most famous filmmaker and its most successful exported actor have finally reunited for the maverick director’s new movie titled The Skin I Live In (La piel que habito).

Banderas plays a brilliant (but mad, they’re always mad) scientist who has genetically created a new form of skin which is impervious to most damage. The good Dr. keeps a woman prisoner in his spacious home and forces her to wear his invention. She’s locked in a sparsely furnished room equipped with cameras that enable the Dr. to watch her on monitors any time he wishes.

We learn about the Dr.’s past through a violent encounter with his criminal brother (dressed in a tiger suit for Carnival), and with information given by his former nanny who now works as his housekeeper and who has secrets of her own. About a third of the way in the movie switches to a flashback to show just how this particular woman came to be held prisoner in the Dr.’s house.

As with nearly all his films, Almodóvar proves what a visually stunning director he is. He frames shots and employs fluid camera movements as well as anyone in the business. He also has a penchant for bizarre little details such as the man in the tiger suit. The dialogue in the script is as sparse as the furnishings in the prisoner’s bedroom cell. In an interview the director has said he toyed with the idea of making this a silent movie and it easily could have been with the use of a few well-written title cards.

Antonio Banderas is creepy as the obsessed scientist. He downplays his insanity, which makes him more frightening. Like Dr. Frankenstein before him, he sees himself as a benevolent force and not as the sinister person he truly is.

I genuinely enjoyed watching this intriguing movie unfold but I have two complaints about it. One is the pacing, which is a tad slow; there are a few too many shots of the Dr. at work that don’t further the story. And my other complaint is the use of a plot device that seems almost like a gimmick. It’s a twisted plot twist that seems intended for shock value alone and it leaves some pretty obvious questions unanswered.

Critics, it seems, are falling over themselves praising this movie. While I agree that it offers a fresh take on an old concept (there are echoes of Vertigo for example) it has been somewhat overrated. Although the final 15 minutes are excellent and the last line is simply brilliant given the context. 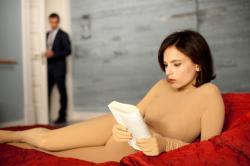 Patrick, you are far too kind to this movie. It's painfully slow with little intrigue, action, mystery, empathetic characters or anything else to hold your interest. Yes, it's nice to look at and Elena Anaya is beautiful and often topless, but that's hardly enough to make a movie.  There is a twist in it, but it's one that is clearly telegraphed ahead of time.

It's been reported that Almodòvar described the film as "a horror story without screams or frights". Is that supposed to be a good thing? Aren't horror stories supposed to have screams and frights? Or at least suspense? Or how about someone to care about or root for?

The only character to whom I felt any empathy in this film is Dr. Ledgard's daughter. There isn't anyone else likable in the entire film. The Doctor himself is fucked up and the woman he holds prisoner clearly has her own issues that we learn about as the story progresses.

For a movie to be worth watching it has to do one, if not more, of the following three things. It has to provide entertainment. It has to be thought provoking. Or it has to be so amazing to look at that it's a treat for the eyes just to watch it. This movie manages a bit of the latter, but neither of the other two. I found none of it entertaining. While there are certainly thoughts that could be provoked regarding the subject matter, this movie ignores them. Yes, as I said, it is occasionally nice to look at, but not enough. Perhaps if Anaya were completely nude in every scene I might have thought otherwise.

Despite what Almodòvar says, this movie isn't a horror story. It's not scary enough for that. Just a nudge in another direction and it could have been a spoof or a camp classic. Instead it's just arthouse bland. 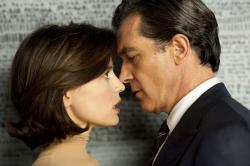 Elena Anaya and Antonio Banderas in The Skin I live In

The Skin I Live In is a horror movie in an old fashioned European horror movie way. Often they were more about scary situations and torture than a serial killer chasing a bunch of attractive young people, as is the norm in American horror films. There are several deaths, but it is the torture aspect of the film that makes this film horrific.

To truly discuss this film is to divulge too many plot points, so I will not. It is better left discovering the story as you watch. My wife, while making dinner, would pop in as I was watching this. I kept her posted of what was happening in the film just to get her reaction. It is that kind of movie.

Antonio Banderas owes much of his career to Pedro Almodovar. He gave him his first big international successes. Now late in his career, Banderas rejoined him for a film that did not actually put him back on the "A" list, but it reminded us that he is so much more than just Zorro.

Elena Anaya is as beautiful as a sunset with breasts. You cannot keep your eyes off her. Jan Cornet is not convincing. His reaction to what is happening to him is not what I would imagine, but then again his situation is quite unique, so who knows how someone would take to such an event.

I want to gives kudos to Almodovar for such an odd endeavor, but I never really cared what happened to anyone. Vicente often seems too nonchalant about what is going on, and he certainly is no saint. I never truly pitied him. He seems to accept what is happening to him far too easily. Without someone to care about, The Skin I Live In left me cold.