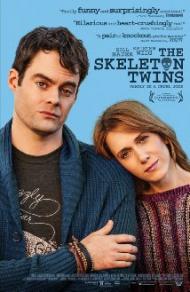 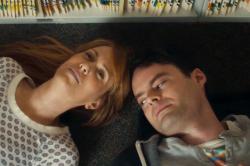 Skeleton Twins is a family drama, interlaced with humor, that shows the power and connection of siblings. Although not entirely original and unafraid of cliches, it still manages to succeed in evoking a gamut of emotions from its audience, going from laugh out loud moments to comic pathos and places much darker and serious.

Bill Hader and Kristen Wiig play the title brother and sister. Their years together on Saturday Night Live works to their advantage and their easy camaraderie makes it very easy to believe these two have a shared past. Although known for their comedy work, they both deliver terrific dramatic performances as Milo and Maggie.

When the film opens Maggie is contemplating swallowing a handful pills, but is saved by a phone call from a hospital in California informing her that her brother Milo has just slit his wrists. She invites Milo to stay with her and her husband in their hometown in upstate New York. The two of them haven't seen each other in 10 years for reasons that are eventually revealed. As the movie progresses, their past is revealed, including the fact that their father, who they were both close to, committed suicide. Although Maggie sets herself up as looking after Milo, we quickly learn that she has her own issues to deal with.

Some of this we've seen before. The opening premise, that of having a gay, suicidal, brother coming to stay with his sister is reminiscent of Little Miss Sunshine, another indie comedy/drama. Milo even confesses to Maggie when she comes to see him in the hospital that he feels like a cliche, that of the dramatic gay man. However, unlike Sunshine, this movie isn't going for as big of laughs and there aren't any cute kids or cantankerous grandpas.

The script, by Mark Heyman and director Craig Johnson walks a tight line between comedy and drama. It keeps the tone just right, reining in the broader moments (no easy feat I'm sure, with Hader and Wiig in the leads) such as when Milo and Maggie get high on laughing gas and one of the film's most feel good moments, when they mime and dance to Starship's "Nothing's Going to Stop Us Now". It uses these lighter moments to break up the tension of the darker moments and give the story heart. Like life, it has moments of joy and sadness.

Both Wiig and Hader deliver fantastic performances. That they were both great comedy performers was no surprise, but they handle the drama equally well. There are several moments of emotional intensity as we learn about their character's past and they handle them admirably. This is important because apart from just a couple of other supporting characters, this movie rests entirely on their shoulders. Luke Wilson as Maggie's husband and Ty Burrell as someone from Milo's past are the only other actors in major supporting parts.

Parents raise us, spouses know us intimately, friends can share a laugh or provide a shoulder to cry on, but as this movie shows, it's siblings who sometimes understand us the best. They are the ones who we share our most formative experiences with and no one else will understand where we came from as much as they do, because they came from the same place. This movie does a terrific job of demonstrating that and the fact that it does it while making you laugh at the same time is perhaps it's greatest feat. After a summer of too many big budget busts, it's nice to see such a well made small film that delivers so much.

Bill Hader and Kristen Wiig in The Skeleton Twins.

The key to The Skeleton Twins is the magical interaction between these two incredibly fucked up siblings. I couldn't agree more about the wonderful performances by Wiig and Hader. They are absolutely believable as twins who've been estranged for ten years but who have both reached a point in their miserable lives where the only way they can heal and become whole is by reconnecting. They need each other. The script brilliantly balances heartbreak with hilarity in a manner that seems completely true to life.

As great as the two stars are they are matched by equally effective performances by Luke Wilson and Ty Burrell. Wilson plays Maggie's very understanding husband, Lance. He is a wonderfully written character that goes against the stereotype of the immature, insensitive husband. He is such a nice guy but he is clueless about the inner torment his wife lives with on a daily basis. He's sort of like an innocent guppy that married into a family of very dysfunctional barracudas. Burrell, meanwhile, plays a much less sympathetic character. Like Wiig and Hader he is known for playing comedy but here he shows himself to have decent dramatic chops as well.

Joanna Gleason shows up briefly as the twins' mother in a scene that explains much about their lives and how they wound up being such emotionally scarred individuals. She's the closest the movie comes to having a villain. Although depending on your point of view you may see their father as one too, since he chose the cowardly way out and left behind his two fourteen-year-old children. As selfish as their mother seems, it was the suicide of their father that caused the most damage to their psyches.

Rarely have I seen a movie that combines sadness and humor so effortlessly. Maggie and Milo are two incredibly screwed up people who both mask their pain with humor. They spent so many years apart because neither was ready to face their shared pain. But you get the feeling that deep down inside they both knew all along that their only chance to heal and find happiness is by confronting their demons together as a united front.

Like Scott wrote, in many ways our siblings know us better than anyone else in our lives, just as we know them. They share the largest part of the journey with us after all. The Skeleton Twins tells the story of how two estranged siblings manage to reconnect at a critical point in their existence and in so doing save each others' lives, both literally and metaphorically. Along the way you will laugh out loud and shed a tear or two. The Skeleton Twins is one of my favorite movies of the year.

The Skeleton Twins is a tragicomedy about two horribly damaged people who have lead very self-destructive lives.  Milo cut his own wrists and Maggie has had several affairs on her clueless husband. The twins are toxic to others and even more so to themselves. As Patrick wrote, the only way they can heal and become whole is by reconnecting with each other.

It is only from each other that each can get the honesty and tough love therapy, that both desperately need. Milo, “You're emotionally unstable.” Maggie, “You're a prick!” Milo, “You need professional help!” Maggie, “Oh, and this coming from a guy who just tried to kill himself.” Milo, “Maybe I should try fucking all my problems away.” Maggie, “Well maybe next time you should cut deeper.” Ouch!

Scott noted the lighter moments, such as the laughing gas scene and the lip-syncing to Starship's "Nothing's Going to Stop Us Now". In fact, the only time we see these siblings sincerely smile or laugh is when they are with each other. Maggie’s husband, Lance, is as nice a guy as they come but Maggie never comes close to being as happy with him as she is with her brother. Milo seeks out his first love but it is also a relationship built on lies instead of any sincere emotional connection.

It is clear that they need each other to move ahead in life but I felt Milo missteps at one point. He betrays his sister’s trust and does something that could destroy her marriage. You could argue that he did it to force her to face the lie that she was living but that was her choice to make, not his. Milo meanwhile, is pursuing the affection of a man who raped him when he was a minor. It was Maggie who originally broke up that illegal relationship, so she believes Milo broke up hers to be vindictive. The film is never exactly clear on his motive.

Echoing what my brothers wrote, The Skeleton Twins is a brilliant example of how siblings have a unique bond with one and other. I was invested in their story but I never cared too much for either one. Both are middle aged but are still making teenage mistakes. Milo and Maggie have not seen each other in ten years and in that time both seemed to get lost. It is only in each other’s company that they can find themselves and a way out of the holes they have dug for themselves.