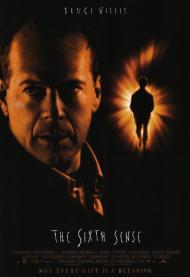 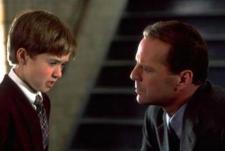 First of all, it wouldn't be any fun to write about this movie without discussing the twist at the end, so if you've never seen The Sixth Sense, stop reading, go watch it and then come back to read the rest, because I'm going to freely discuss it. Although, seriously, is there anyone who doesn't know the twist ending by now?

Okay, in case your memory of the movie is a bit rusty, Bruce Willis plays Dr. Malcolm Crowe, a child psychologist who is shot in the opening scene by a former patient of his. The story then jumps ahead a few months and Malcolm meets with another boy, Cole (played with gravity far beyond his years by Haley-Joel Osment), who reminds Malcolm of Vincent, the patient who shot him. Malcolm feels that by helping Cole, he will help get his own life back in order.

It turns out that Cole's problem is that, as stated succinctly in the movie's most famous line, he sees dead people. Malcolm does end up helping him, but at the very end it is revealed that one of the ghosts that Cole saw was in fact Malcolm because when Malcom was shot at the beginning, he was killed. He just never realized it. He warped his view of the world to hide the truth from himself.

There are a lot of great things about this movie, but the greatest thing of all is that if you took out the ending; if Bruce Willis didn't turn out to be a ghost, if he really was just looking for redemption after failing Vincent, this would still be a great movie. The fact that he is a ghost only elevates it; makes it more unique, but even without that plot point, this is still a hell of a good movie and one that fully deserved its Oscar nomination for Best Picture.

I also have to say that rewatching it this time I couldn't believe that I never guessed Bruce Willis was a ghost. It seems so obvious now. My hindsight is 20-20. All of the clues are there, but also brilliantly filmed so that every clue can also be interpreted differently. The anniversary dinner between Willis and his wife is a perfect example. At first it just seems that she's pissed at him for being late for dinner. She mutters, "Happy Anniversary" to him in what seems like anger. In hindsight you realize that far from being angry, she was actually celebrating their anniversary and she was speaking to him wherever he might have been.

This will probably always stand as writer/director M. Night Shyamalan's masterpiece. He builds suspense, throws in some genuinely scary and creepy-as-hell moments, there's mystery, good characters and nice use of symbolism (look for the color red in key moments). Unfortunately, ever since this movie he's been trying to recapture the spirit of it instead of branching out. He seems so fixated on making other movies with twist-endings that he has forgotten how to just be entertaining. The twist ending isn't what made this movie so good. It was good without it. He needs to remember that.

If there's any other proof needed that it isn't the twist ending that makes this movie so good, then I simply say, watch this movie again. Even knowing the ending didn't hurt my enjoyment of it. In fact, I'd go so far as to say you can't truly enjoy this movie fully without watching it twice. Once before you know the ending and once after you do so that you can see how brilliantly the story is set up and how all the clues were right there in front of you all along.

Toni Collette in The Sixth Sense.

Never in the history of cinema did a movie so need to be watched twice to be fully appreciated. The first time I watched it, I found myself looking around every corner of the movie, waiting for a specter to jump out and scare Osment. The second time, I focused more on Willis and how expertly Shyamalan hides his secret in plain sight. During the scene in the hospital, Osment comes right out and tells Willis that he is a ghost, but it is filmed in such a way that you do not catch on the first time. "They only see what they want to see. They don't know they're dead."

Another true success of this movie is the way Shyamalan draws such great performances from his leads. Scott mentioned Osment and he truly does give one of the most intense performances by any child actor, ever. "Stop looking at me. I don't like people looking at me like that." Willis is best known for his cock sure performances in Die Hard and Moonlighting, but here he is somber and depressing. He plays a man frustrated by how he cannot help this child or mend his marriage. It is the most vulnerable role of his career. "He feels that if he can help this new boy, it would be like helping that other one too." Even the small role played by Donnie Wahlberg impresses. "You failed me! You failed me!"

This was the movie that put Toni Collette on the map. The Australian born actress first gained some international attention for playing an overweight, ABBA loving loser, in Muriel's Wedding (1994), using her natural Australian accent. She played a supporting role to Gwyneth Paltrow's lead in Emma (1996), using a British accent. It was The Sixth Sense though, that allowed her to reach such a huge audience, using an American accent. Her best scene is when Osment finally tells her his secret. She emotionally melts right in front of him. "Do I make her proud?"

Very few movies live up to the hype, but this one certainly does, especially if you have never seen it, and do not know the twist ending. Even if you do know the plot twist, you will likely love it. Ten years after first watching it, I still found myself wrapped up in it's macabre atmosphere and desperate characters. 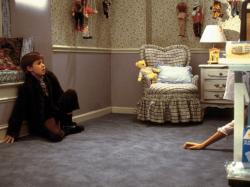 The Sixth Sense is by far M. Night Shyamalan's best movie to date. Signs and The Village are the only others this talented writer/director has made that are anywhere near the same league as this classic. Although Sixth Sense was his first A-list movie I never before realized that Shyamalan had written and directed two previous feature films, 1992's Praying with Anger (in which he also starred) and a 1998 comedy called Wide Awake. At any rate, The Sixth Sense propelled the then 29-year-old auteur to the front ranks of Hollywood filmmakers. He wouldn't be the first success story to find that reaching the summit was easier than staying there.

I vividly remember seeing this movie for the first time and my complete surprise when it was revealed that Malcolm is actually a ghost. This is due entirely to the masterful direction and clever script by Shyamalan. As my brothers already wrote, the clues are all right there the whole time. It is our preconceived ideas about movies (that The Sixth Sense changed forever) that first causes us to believe he is still alive. We saw him get shot but then when he shows up in the next scene he has to be alive right? Wrong!

Then as the story progresses Shyamalan places Malcolm in scenes with other characters and makes it appear as if he has been interacting with them. It is only after the big reveal that it becomes obvious to us that we never actually saw anyone other than Cole acknowledge Malcolm's presence or speak directly to him.

Shyamalan also does a great job of building the suspense and horror aspects of the story. It isn't until after Cole tells Malcolm his secret, for example, that we actually see any ghosts. The movie turns suddenly from eerie to downright creepy. The scene in the car between mother and son at the end is brilliant. When Cole tells his mother that a woman died in the accident up ahead and that he knows this because he can see her. She asks, “Where is she?” Cole calmly replies, “Standing next to my window.” That line gives me chills every time I watch this movie.

I also agree with my brothers about the three central performances. Willis and Collette are both wonderful in their roles but Osment steals the movie away from them. He is at times a vulnerable little boy seeking the comfort of an adult and at other times wise beyond his years. Never does he resort to just being cute or become annoyingly precocious. It is some of the most natural and yet intense acting I've ever seen by a child.

With a domestic haul of $294 million, The Sixth Sense was the second biggest U.S. box office hit of 1999, surpassed only by the Star Wars: Phantom Menace juggernaut. The following year it would become the most rented movie of 2000. It also became just the fourth horror movie to earn a Best Picture Oscar nomination after The Exorcist, Jaws, and The Silence of the Lambs.

The huge success of this movie has proven to be a double-edged sword for its director. M. Night Shyamalan was pigeonholed as a filmmaker that specialized in twist endings and he has thus far been unable to recapture the magic or break out from that mold. Even if he never again makes a movie as good as this one, he can rest assured in the knowledge that he created at least one genuine movie classic for the ages.