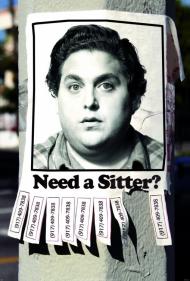 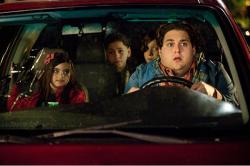 Some movies can surprise you, while with others you get exactly what you were expecting. It should be no surprise which this movie turned out to be. From the very first preview months ago, until the final credits rolled, this movie advertised and delivered itself as a weak, slacker comedy remake of 1987's Adventures in Babysitting with slovenly Jonah Hill in the Elisabeth Shue role.

As a favor to his mother, Noah agrees to babysit  three kids so that she can go on a double date with their parents and a surgeon they're setting her up with. The children's parents must be incredibly desperate for a night out because they agree to go along with it.

Shortly into the night Noah gets a call from his "girlfriend" telling him that if he picks up some cocaine and brings it to a party where she's at in Brooklyn, then they can have sex. With that for bait, Noah packs up the kids in their family minivan and heads off for an adventure that involves drug dealers, cherry bombs in a toilet, a diamond store robbery, a bar fight and a Bar Mitzvah.

To be fair there are some funny moments. Hill has his limited charms, but we've seen them and most of these jokes before. Sam Rockwell is a bizarre standout as the psychopathic drug dealer who alternately wants to befriend and murder Noah. He's the only one who offers the unexpected.

The dramatic moments are the worst. Noah offers the three different kids pat little nuggets of wisdom that sound more like something from an episode of Oprah than they do like something this fat, unemployed slacker would say. His daddy issues are equally ineffectual. And the less said about the new love interest that enters his life the better.

There's definitely no need to waste your money on this one in the theater. What jokes there are - and there are a few - will be just as funny on DVD or download and maybe even a little bit more since you won't have wasted so much money to see them. 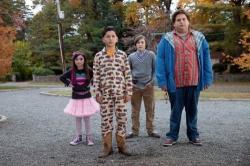 Scott did not want to discuss the love interests but I cannot let it go.  Ari Gaynor plays a drug using bitch whom Hill's face emerges from in the opening scene.  Even though she is just using him, there is no way a girl that looks like her would ever have any form of sex with a tub of lard like him.  Kylie Bunbury is even hotter and is playing a college girl with real potential.  Why would she even notice Hill, let alone be romantically interested?  Hill is playing a college drop out, who lives with his mom and rides around on his bike?

Although all of that is unbelievable, the real stretch is how black people are treated in this film.   I am white and I was offended.  While at a store two black women get up all in Hill's face with stereotypical attitude.  Later Hill enters a black bar where he gets past the door man by talking slang.  He gets a bunch of black thugs, who just stole his minivan, to like him by letting a black girl hit him and come back for more.  They like him so much they beat someone up for him.   The fact that the "smart" black girl has long "white" girl hair and has the lightest skin color is also offensive.  The two black women in the store have short hair and darker skin.

The Sitter spends one night with Hill interacting with a bunch of different people.   He changes everyone's life with just a few words.  "Your gay."  "Stop having sex with your assistant."  "Wipe off the makeup."  He makes Oprah sound like a genius.   The Sitter is a real turd!