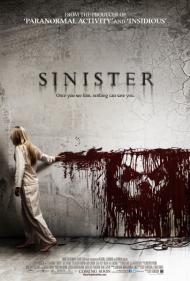 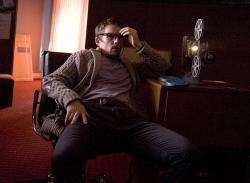 Ethan Hawke wearing the blandest sweater ever made in Sinister

Although I jumped from my seat several times, Sinister suffers from a ridiculous plot. So I am faced with a question; if a scary film causes frights is it still considered a success even if the plot makes little sense?

True-crime author Ellison Oswalt moves his family into a home where the previous family was murdered and the youngest girl missing. He does so to write a book about them. Upon going into the attic he finds a box with a projector and several rolls of film. He privately watches them and discovers that each are snuff films, featuring the slaughter of different families from all over the country, including the one who used to live in the home he currently resides.

He starts to hear noises around the house at night. This provides several nervous moments but the really creepy stuff starts when Ellison starts to notice a strange, ghostly figure in all of the films. With the help of a local deputy, who is also a fan of his first book, Ellison starts to see a pattern of ritualistic killings that begin threatening his family.

For all things to happen, Ellison had to watch the films. The entire premise rests on the fact that he will watch these films left for him. Then there is the ancient Diety who eats some children's souls while killing others. If he needs to eat children's souls to stick around, why not eat all of their souls and not just some? What if a single person moved into the house. Would the box only appear if children moved in? He only eats children's souls so a single person or a childless couple would put a damper on his soul consumption.

I know, this is a horror fantasy, so rules can be stretched and made up, but if I am distracted with the inconsistencies then what has the film accomplished? Sure there were moments when I squeezed my wife's hand involuntarily, (yeah, I am a wuss) but the film never made much sense. The more I thought about the premise, the more out-landish it all became.