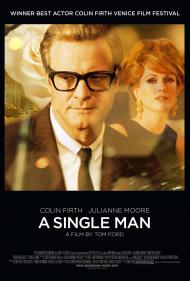 A Single Man is fashion designer Tom Ford’s movie debut as a director. He also wrote the screenplay from the book by Christopher Isherwood, the man who wrote the original story that the musical Cabaret was based on. Not surprisingly Ford shows a talent for the visual side of moviemaking. He gives the movie a clear highly stylized look and an oppressive atmosphere. The entire movie feels a bit like being underwater.

The problem is that the story is rather slight and it’s also relentlessly sad. Set in California in the early 1960’s, it is about a college professor (Firth in an Oscar worthy performance) who has just lost his longtime lover in a car accident. He is pointedly not invited to the funeral of the man he has shared his life with for the past 15 years because the man’s family has never come to terms with the fact of his homosexuality. We spend one eventful day with George as he attempts to deal with his severe depression.

Colin Firth is brilliant as George. He is in virtually every scene and easily carries the weight of the movie on his shoulders. Or more accurately on his face. Norma Desmond would be proud. I never before realized what a talented actor he is. His performance alone is the reason for watching A Single Man, he outclasses everything else about it, like a Rembrandt hanging in an ordinary frame.

Julianne Moore, whom I normally adore, left me unimpressed. Perhaps it is just the script; she plays George’s best friend/onetime lover who drinks way too much and who has never put down the torch George lit in her when they were young. Where Moore usually comes across as completely natural, I found her Charley forced and stiff. But again it might just be the script or perhaps that is the effect she was going for.

A Single Man is a mixed bag. It certainly shows that Tom Ford has promise as a filmmaker and it just might be the finest performance Colin Firth ever gives. Unfortunately the story itself is pretty weak and that is a problem that no directing or acting can ever completely fix. 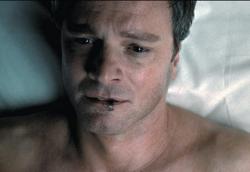 Colin Firth in A Single Man.

I agree Patrick that this movie is sad, but it is also shot with a stylish flair and features a career pinnacle performance by Colin Firth.  The plot is a bit thin and feels more like a novella than a novel, but then the running time isn't overly long either.  I wasn't bothered by the lack of plot because this isn't really that type of movie.  It's more about what's going on inside George (Firth) than what's happening to him on the outside.

Having seen this movie I now realize that Firth was robbed of an Oscar by Jeff Bridges.  Bridges was good in Crazy Heart, but Firth is amazing in this role.  He uses the same British stiff upper lip persona he's used so many times before, but this time you see the cracks in his facade.  When he receives the news of Jim's death by telephone, he maintains his composure while at the same time revealing his deeply felt emotions on the inside.

The movie follows George for one day as Patrick said.  We see him wake up, go to work at the college where he teaches, deal with a flirtatious student who challenges him both in and outside the classroom, share a moment with Charley (the woman he once had a brief sexual encounter with) and just generally cope with the grief he's still dealing with following the death six months previously, of someone whom he has loved and lived with for over fifteen years. It's an emotionally eventful day, but not an action packed one that will have a major impact on George's life.

As you'd expect from a fashion designer, Tom Ford knows how to make a movie look good. He employs a very interesting use of color.  When George is feeling cold and depressed, the colors are washed out, but when he is drawn out of himself or engaged with someone, then the saturation is turned up to varying degrees dependent upon his mood.  I'm not normally somone who enjoys a director who tries to make his presence known and I'd rather they stayed out of the way and just shot the story, but the stylish filming style here actually enhances the story instead of distracting from it.

I think Moore plays her part just fine.  She's playing a British woman, so it seemed natural to me that she came across as forced and stiff.

I was quite surprised to see how few stars you awarded this movie, Patrick.  To me, it's one of the best movies of last year and an impressive directorial debut by Tom Ford. 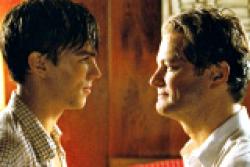 Patrick and Scott wrote, this movie spends a day with George as he deals with his grief, but more accurately, it is about the day George learns to emotionally get on with his life.   He has been dealing with the loss and grief for months.   The events of this day is his therapy back to the world of the living.

The movie opens with George following his morning routine.  He is very methodical in everything he does.  He is stiff and practiced in everything in every movement.  Like the the scene where he learns of Jim's death, he barely suppresses his emotions.  He is a living zombie, struggling to hold his emotions in check.  He takes all kinds of aspirin and drinks plenty of alcohol.

On this day we see him rediscover the world around him.  He looks out at the class he teaches and sees young men who could easily be gay, reminding him that some of his issues are hardly unique.  He meets a gigolo, Carlos, at a party store who assumes he wants sexual favors.  This shows George that he can still find physical pleasure.

He talks to his drag hag friend where they share open, honest conversations.   She represents his past and a possible different lifestyle.  He had once had sex with her.  He could have chosen to marry her and live a life in the closet, but instead he met Jim and chose a different path.

Finally, he spends time with Kenny, who presents himself to George as if he is begging to be fucked.  He uses any excuse to touch George or get naked in front of him.  However, George and Kenny develop a relationship that has depth, and goes beyond the physical.  Kenny takes care of George, helping him down to the beach, putting a band-aid on him and so much more.  This shows George that he could again find love and have another meaningful relationship with someone who genuinely cares for him.

A Single Man takes us on a cathartic journey and then ends ironically.  Through the people George encounters on this eventful day, he learns to get past his heart break.   Each person represents an option for him.  Carlos could provide him with sexual pleasure.  Charley could provide him with companionship.   George keeps them both at a logical distance, only letting Kenny into the center of his grief.

I never really noticed the direction, other than the nude swimming scenes seem to linger on pointlessly.  I do have to agree that Firth is an amazing actor.  I liked the little moments, such as when he smiles as the little girl across the street tells him that her dad thinks he is, "light in the loafers."  When he attempts to kill himself he first tries to make himself comfortable.  A Single Man is about realizing that sometimes the little things you may not think about in your day can sometimes mean so much more.