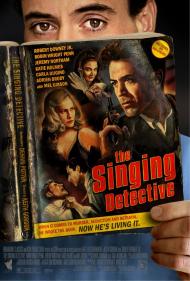 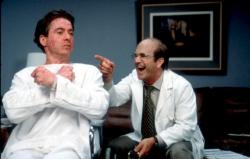 Robert Downey Jr. and Mel Gibson in The Singing Detective.

The Singing Detective, based upon the 1986 British television series of the same name, is a quirky film that combines comedy, drama, film-noir, and musical numbers in such a way that they form something quite unlike your typical Hollywood movie. It features the stellar cast of Robert Downey Jr., Mel Gibson, Robin Wright Penn, Katie Holmes, Jeremy Northam, and Adrien Brody among others, all of whom turn in great performances, particularly Downey in the lead role. While some may have difficulties getting past the oddness of this film, those who do will be rewarded.

Downey plays Dan Dark, a novelist of pulp detective fiction, who suffers from a severe case of psoriasis. While hospitalized from the body-covering rash, he begins to experience hallucinations that combine the plot of his first novel, 'The Singing Detective', people in his life now, and memories from his childhood. The events in the real world of the hospital, along with those only in his mind, form separate plots that meld into one emotional story.

As the hospitalized writer, Downey turns in an intense performance filled with bitterness, anger, sorrow, regret, and scathing humor, all while wearing full body makeup that makes him look, in his words, “Like a human pizza." In the alternate world of his mind, he plays ultra-cool detective Dan Dark, a film noir private eye (who moonlights as a nightclub crooner) investigating the death of a hooker, who, in his fevered brain, takes on the appearance of his wife and at times his mother.

The Freudian reasons behind this sublimation are revealed when Dan's doctor recommends him to a psychologist (an almost unrecognizable Mel Gibson in a scene stealing role), who begins to probe Dark's subconscious. While Dark is at first reluctant and angry about seeing him, he eventually begins to talk about his past. It seems that the defining moment in Dark's childhood, which has affected him ever since, was seeing his mother having sex with her husband's business partner. The shock of seeing this scarred his outlook on life and women.

As Dark's sessions with the psychologist progress, along with a new medical treatment, his physical condition improves, but his hallucinations and paranoia continue to grow. He envisions his estranged wife (Robin Wright Penn) trying to betray him with a man who looks identical to his father's old business partner, and the villains from his detective story begin popping up within the hospital. The climax of the movie happens when all of his hallucinations collide within his head.

The result of this tangled web of fantasy and reality may sound complicated and odd, but at its most basic level, this movie entertains. It features some laugh out loud moments, (Katie Holmes as the nurse applying lotion to Dark's body while he fights against having an erection is one of the funniest scenes) as well as some serious drama. If you can accept the fact that more than half this movie takes place inside Dark's head and if you can accept the fact that the characters will break into song at the oddest moments, than you will no doubt be entertained. I know I was. 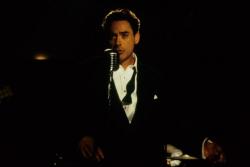 The Singing Detective is entertaining, but it takes some getting used to. Scarred by his mother's betrayal with his father's business partner, Dan now pictures all wanton women as his mother and the bad guys in his stories are always the business partners. The same actors play three different people, the real people from his past, the people in his story and the people in his imagination.

Where as Scott wrote he has hallucinations, I think he just chooses to look at the world a different way to escape his situation. The best example is when he is lying on a bed in only his underwear. Surrounding the bed are several doctors spouting their advice and questions. Embarrassed and angry at how he is being treated he imagines there ranting as a song and dance. I don't think he actually had hallucinations. I think he just tried to escape his situations with his imagination.

Downey does a great job. I was hard pressed to even watch his close ups with the rash. It was unsettling. The best scenes in the film are the ones with him and Gibson. This is not there first film together, and it is evident by how well they bounce off each other.

You can call this movie Film noir, musical, comedy or drama. I will call it a psychological dramedy. The entire story arc is in Dan's head. Through his therapy, he resolves all of the conflicts. Except of course for the problem that arises during the lotion scene. No matter how hard he tries to cerebrally stop it, it still works itself out.

Did Robert Downey Jr. and Mel Gibson have a bet over which of them could look more unattractive in this movie? If they did I have to declare Downey Jr. the winner. His skin rash with open festering sores beats Mel's ugly, grotesquely-large balding head and thick glasses. Their performances, however, are both as good as their appearances are bad. Downey Jr. gives one of the most intense acting displays I've seen in recent years. He's quite brilliant in this movie.

Unfortunately, for me, the rest of the movie is not on the same level as his central performance. It's a creative idea but the execution fails to live up to the promise. The different styles don't mesh together but instead seem to compete, with none of them coming out a clear winner. I was never bored watching it but, despite Downey's masterful acting, I never really cared about Dan. His world, as depicted in the movie, seemed too detached from reality to earn my vested interest.

The 1950's era songs are fun. I especially enjoyed "Mr. Sandman" and "How Much Is That Doggie In The Window". Still, although they serve as a counterpoint to whatever reality Dan is experiencing in the hospital, they do little to advance the plot.

The basic concept behind this film, which comes from the 1980s BBC television series, is highly original. As a movie, The Singing Detective makes a valiant attempt at greatness. Its odd mix of disparate styles and genres never quite gels. Chalk it up as a failed cinematic experiment featuring an explosive star turn from an actor firing on all cylinders.