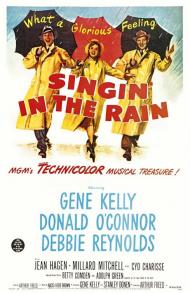 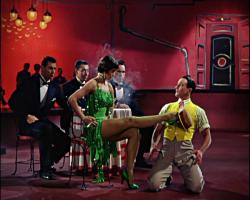 Cyd Charisse and Gene Kelly in Singin' in the Rain.

Certainly one of the best loved musicals ever made, Singin' in the Rain has something for everyone; great songs, unforgettable dance numbers, laughs galore and heartfelt romance. Gene Kelly, Donald O'Connor and Debbie Reynolds match each other line for line and step for step in this brilliantly paced movie. Throw in a truly hilarious turn by Jean Hagen as the narcissistic yet dimwitted Lina Lamont and the seductive grace of ravishing Cyd Charisse and it is easy to see why Singin' in the Rain continuously ranks as the greatest movie musical of all time.

Unlike many classic musicals, Singin' in the Rain features an original screenplay; it is not based on a book or Broadway Show. Written by the talented team of Betty Comden and Adolph green, it tells the story of how the fictitious Monumental Pictures evolved from silent movies to talkies; specifically dealing with the famous duo of Don Lockwood and Lina Lamont; silent movie lovers who in reality have nothing in common.

It is a tribute to the golden age of Hollywood and Vaudeville featuring some of the best-loved songs to come out of that era. Classic scene for classic scene this movie can go toe to toe with any other. The famous opening with the three stars in raincoats and umbrellas, the "Make Em Laugh" number, Lina trying to imitate her diction coach 'I caaan't stand em', the spectacular Broadway ballet, the final scene when Debbie Reynolds' character runs down the theater isle and Gene Kelly calls out 'Stop that girl, she's the real star of the Dancing Cavalier, Miss Cathy Selden' and of course the title number which is quite possibly the most famous dance in the history of the motion picture.

This is one movie that should be seen on the big screen if at all possible. The brilliance of the Technicolor is amazing. Back in the '30's MGM's lion was the undisputed king of Hollywood; culminating in that golden year of 1939. A dozen years later, suffering the threat of television and the loss of several major stars, Singin' in the Rain proved that Leo had at least one great roar left in him. A masterpiece! 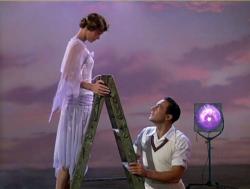 Debbie Reynolds and Gene Kelly in Singin' in the Rain.

What I always remember about Singin' in the Rain is that it is one of the most feel good movies ever made. The songs are all so joyous and peppy; from Donald O'Connor's Make em Laugh number to Gene Kelly's infectious grin during the actual Singing in the Rain song. I can't come away from this movie without 'a smile on my face.'

Besides having some wonderful songs this movie also has some great comedy. Donald O'Connor's wit and Jean Hagen's whining voice add to this movie as much as Gene Kelly's dancing and Debbie Reynolds singing.

This movie came out about the same time as Sunset Blvd. Each film has a theme of talking films destroying silent actors careers. However, this movie takes a tremendously lighter touch in dealing with the subject. Watch these two movie for an odd, yet strangely related double feature. Together, they are truly what Hollywood entertainment is all about. 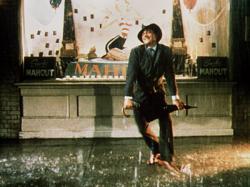 Gene Kelly in Singin' in the Rain.

Wow, I often agree or disagree with my brother's reviews, but seldom do they take me completely by surprise. Yet Eric's last paragraph has done exactly that. The two movies, Sunset Boulevard and Singin' in the Rain, are so different that I tend to forget they were made at the same time. Now that he's mentioned it, I can't get the image of Lena Lamont spending her old age rattling around a huge mansion with her German butler.

To me, the best parts of Singin' in the Rain are the comedy. Other than Make 'em Laugh and the title number, featuring the world's most famous lamp post, the rest of the songs don't thrill me. But the comedy still works even in this jaded day and age.

Donald O'Conner nearly steals this movie. His antics as the thankless sidekick are some of the best and he definitely gets the funnier lines than anyone except perhaps Jean Hagen as Lena. Who can ever forget her classic line, 'I am a shimmering star in the Cinema firmament. It says so. Right there.'

While I mentioned above that the songs in this movie aren't my favorites. I should add, and since this is Gene Kelly we are talking about, it should come as no surprise, that the dance numbers are magical. The classic number with Cyd Charisse is just that, a classic. And so are all the rest.

And so, come to think of it, is the whole movie.