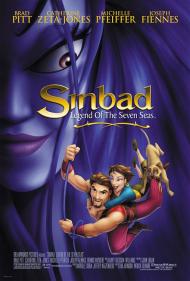 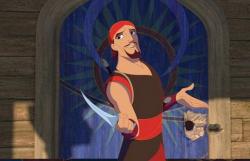 Sinbad: Legend of the Seven Seas.

I have been reading lately that the traditionally hand drawn cartoon features are doomed. The critics have been writing that people only want to see computer, PIXAR type cartoons. As usual, the blame is aimed in the wrong direction. People want interesting, entertaining stories. Computer graphics are just window dressing.

Sinbad uses both techniques. The monsters and the final sequence are computer graphic while the people are all hand drawn. The effect is great and plays nothing into the failings of this movie.

Sinbad is a pirate who is tricked by a Goddess into helping her get away with stealing a powerful book. The opening scene has Sinbad and his crew attack and try to rob a ship that is captained by his best friend. My 9 year old summed up the movies problem at this point by asking me "I thought he was good?" Sinbad is a rogue, who through the course of the movie eventually redeems himself as the hero. There is also a love triangle where it appears Sinbad is making a play for his best friends fiancée. Where as Looney Toons: Back in Action understood it's audience well, the makers of Sinbad are utterly clueless.

This movies target audience, whether the makers of this film agree or not, is boys of single digit age. Boys at this age only play with the good guy action figures and never with girl ones. This movie is vague on Sinbad's morals and the love story is utterly pointless.

The movie has some decent action sequences. One involves a huge sea monster. The filmmakers drop the ball on this scene though. As the giant monster attacks, Sinbad and his friend shrug it off as if fighting it is just something to do to pass the time. To make the audience feel tension, the characters have to act some way other than nonchalant. The best action scene involves a giant bird that ends in a getaway by sledding down a snowy mountain. It has some levels of tension in it.

The best thing the movie has to offer is Michele Pfeiffer as the evil goddess. She acts so well with her voice that she steals every scene she is in. Brad Pitt and Catherine Zeta Jones do not even register compared to Pfeiffer's reading.