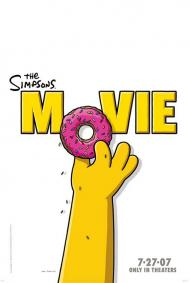 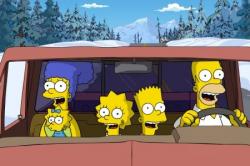 The longest running prime time animated show in television history finally makes it to the big screen. After 18 years on the air, I wondered if The Simpsons had any laughs left in them. Luckily for us, they do.

Lisa Simpson is trying to save a polluted lake. Her "An Irritating Truth" presentation convinces the people of Springfield to build a protective wall around a lake and to stop dumping garbage in it. However, Homer wants some donuts, and has some pig shit to get rid of first, so he pollutes the lake and contaminates the town. Under President Schwarzenegger's leadership, the EPA encases Springfield in a huge glass dome. The town revolts against Homer and family and things get even worse when Tom Hanks announces that Springfield will be turned into the new Grand Canyon.

The best moments come when the Simpsons interacts with their fellow Springfield citizens. I laughed hardest when the Simpson family arrives late to church and they think no one can hear them. Bart's humiliating nude skateboarding is likewise hilarious. The movie only loses its way with a detour to Alaska. The only reason the movie seems to have in going there is to make a slam on big oil drilling in Alaska.

Some of the more creative moments are when they comment on other cartoons. In one scene Homer and Marge go about getting naked, so as to have sex, with the help of a bunch of woodland animals that you might see flitting around Cinderella or Snow White. Another great moment is when a tap dancing penguins gets shot. Man, I hate Happy Feet!

Nearly the entire cast of characters are present, although some, like Mr. Burns, have very small parts. Homer, as in the television show, is the star of the movie and deservedly so. He is the funniest character as well as the most sympathetic. He is amazingly flawed and as such, the heart and soul of the franchise. He is a complete idiot yet he always tries to come through for his family, at least after Marge forces him to. 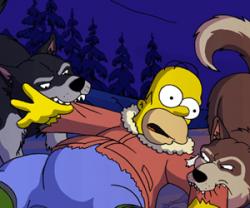 I know this is a silly thing to focus on, but why didn't the residents of Springfield just dig underneath the glass dome to escape? I know, I know this is The Simpsons and I'm worried about realism? I'm just saying, it doesn't hurt the humor, but it does seem kind of silly, and not in the good way.

One of my favorite lines in the movie is one of the first, when Homer says, "I can't believe we're paying to see something we get on TV for free! If you ask me, everybody in this theater is a giant sucker! Especially you!" And it does seem odd that a show that has been on for so long should suddenly decide to do a movie.

My one complaint about the movie is that the supporting cast of characters is given short-shrift. Yes, most of the regulars get a cameo, but not all. The Mayor, the Principal, the teacher, just to name a few don't appear at all, and Mr. Burns and Apu are given very small parts.

Personally, I stopped watching the show about 10 years ago. I can hardly believe it's still on the air! I mean it started in 1989 for god's sake! What's almost as amazing is that it does – as Eric said – still have some laughs left in it (I particularly enjoyed the pig). Not enough to make me want to start watching the show again, but enough to make this an enjoyable movie.

I agree Eric that the Simpson’s scene in church was hilarious. What has always made the show so good is the pacing and the writing. The writers sneak many quick jokes in that you will miss if you’re not paying attention. Like Bart writing, “I will not illegally download this movie” on the chalkboard during the opening credits. They have also always poked fun equally of human foibles on both the Left and the Right side of the political spectrum.

Homer, as stated above, is definitely the heart of the movie. He can make you laugh and feel real emotion at the same time. For example when he says to Marge, “I dunno what to tell you, Marge! I don't think about things. I mean, I respect those who do, but... I just try and make the day not hurt until I can crawl back in with you.” How can you not like this guy even for all his selfish stupidity.

Like Scott I stopped watching the series years ago but this movie does indeed prove there is life left in Springfield.