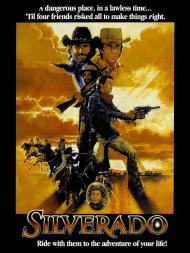 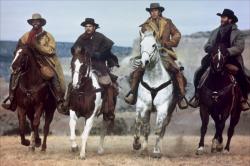 It starts with a cowboy, Emmett, being attacked inside a shack. After killing his attackers he walks out the shack door to reveal a panoramic desert landscape. It is a direct nod to the opening scene in John Ford's The Searchers (1956). Emmett comes across a man, Paden, lying in the desert wearing only his pink long johns. Emmett gives him a drink of water, and never has the line, "Pleased to meet you." been spoken more sincerely.

They join up and go to a town where they discover that Emmett's brother Jake is in jail. "All I did was kiss a girl!" They break him out and befriend Mal, who was kicked out of town because he is black. Mal is heading to his families ranch. The four come across a wagon train and help them out with some men who robbed them. Just before reaching the town of Silverado, they all part ways. Jake and Emmett head into town, to see their sister, while Paden gets a job in a saloon.

Mal goes to see his family, where only his father remains. His sister has moved into town as a saloon girl. The entire town and countryside seems to be owned and run by wealthy land owner McKendrick. This includes the sheriff. His men are trying to run Mal's dad off his land.

Silverado is the film that made Kevin Costner a star. He steals every scene he is in. Jake is a charming saddle bag over flowing with energy. He can never stand still. His eye for the ladies always gets him into trouble. "I don't believe a lady has to explain anything to a man this ugly." He says to a man in a saloon competing for the attention of a saloon girl.

After Emmett crosses the sheriff, his deputies try to kill him, but he is saved by Mal. Glover shoots one and aims his shotgun at another. He then says one of my favorite lines, "I don't want to kill you and you don't want to be dead." The deputies nab Jake and his nephew, shoot his brother in-law and burn his sister's home. With little left to lose, the four friends unite against their common enemy.

The entire cast is good, including the supporting actors. Linda Hunt as the saloon owner and John Cleese as a sheriff, are the two stand outs. Cleese's first line is, "What's all this then?" It is a familiar line from Monty Python's Flying Circus.

Silverado is an action packed adventure. From a stampede to a jail break, it incorporates many classic movie western themes and elements. It ends in not one, but two shoot outs and a climactic middle of the street gun fight. Silverado was the best made western since The Magnificent Seven (1960), that did not star John Wayne or Clint Eastwood. 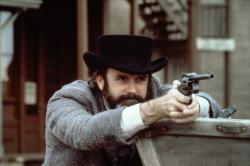 By 1985, the Western genre was firmly resting in Boot Hill alongside Movie Musicals. It's fitting that Eric mentioned Clint Eastwood because he's probably the only living actor who could get a big budget Western made today. There have been a few sporadic attempts at making one in the intervening years (most recently the comedy flop, A Million Ways to Die in the West), but they are rare and typically not mainstream hits. But, since as Eric pointed out, Kasdan was a big name in Hollywood in the mid-80s, he had the cache to produce nearly any story he wanted, including this one. The result is an action packed homage to Westerns of old. It wasn't able to revive the genre, but it was a surprise hit and remains highly entertaining.

I can remember how excited I was when this movie came out, not because it was a Western, but because John Cleese was in it. As an avid anglophile and Monty Python fan, he was the big draw for me. The rest of the movie, outside of his near cameo appearance, was just a bonus. Another plus that resulted from this movie that would please fans of British comedy is that Cleese met Kevin Kline, whom he would later star alongside in A Fish Called Wanda.

The cast is as good as Eric said, but there's something odd about it and that is that there is no clearly defined central character. When the movie opens it seems as though Scott Glenn's Emmett will be the lead, then Kevin Kline's Paden takes center stage, but then the story seems to rotate among all the characters. Focusing on just one lead would have tightened the story and possibly shortened the lengthy running time. Kline, Glenn and Glover are all fine actors, but they each lack the leading man charisma needed to headline a movie. Ironically Kevin Costner, the one member of the cast with the needed star quality, is the only one of the central group who is definitely in the supporting position. Costner was 30 years old in 1985, but he successfully plays much younger and is the source of some genuine humor. He, as Eric mentioned, steals every one of his scenes.

Nearly every Western trope is trotted out in service of the plot. From the evil rancher running the town to the High Noon style gunfight at the film's climax, we've seen all of this before. Clearly this was done deliberately by Kasdan. This is a tribute to all of those Westerns from the 1950s. Kasdan, a self described Western fan, has mentioned John Ford and John Huston as inspirations. You don't need to be familiar with their work to enjoy this movie, but knowledge of them will add to the sense of nostalgia the plot generates.

Perhaps the movie's greatest strength is its sense of fun. Despite its 2 plus hour running time, its energy never lags. It's not a comedy, but it contains humor and uses it to good effect and without taking away from the tension of the gunfights. It's a long way from the revisionist Westerns of the 1970s. It's not trying to show you the plight of the Native Americans (just about the only Western element absent from the film) nor is it a dark examination of a life of killing. Nor does it delve too deeply into racism, despite including a few scenes that revolve around it with Danny Glover's character. It just wants to show you a good time and it succeeds admirably.

Silverado is a movie that I missed the first time around. I'm glad I finally watched it as it's a highly entertaining homage to classic westerns featuring a great cast of 1980's actors. Visually it's very impressive. The town of Silverado was built in a remote area of New Mexico. It has been used in many subsequent westerns including Young Guns (1988), Lonesome Dove (1989), Wyatt Earp (1994), Last Man Standing (1996), Wild Wild West (1999) and All the Pretty Horses (2000). The look of this movie is above reproach.

I see Scott's point about the lack of a central protagonist. Like Kasdan's previous movie, The Big Chill, Silverado is definitely an ensemble piece. I didn't mind the shifting focus. The stories are all intertwined anyway, but the best scenes are definitely the ones with the four main characters all together. The script regurgitates many western cliches but it does so with an infectious enthusiasm. As stated above, you don't need to be familiar with the work of John Ford or John Huston but you will certainly get more out of the movie if you are.

I agree with my brothers that Costner steals his scenes as the happy-go-lucky young horn dog Jake. Costner does a great job of showing his character's innocence. Take the scene where Emmett, Paden, Jake and Mal are sitting around the campfire. Jake excitedly asks Mal, “You've been to Chicago?” Mal replies that he has. An obviously impressed Jake then asks with wide-eyed wonder, “Was it wonderful?” Mal tersely replies, “No.” Glover downplays the scene but you can see the flicker of his thoughts across his face as if he's remembering some tragic event. This scene effectively demonstrates how 19th Century America was a very different place for a black man than it was for a white man. And it does so without being at all preachy.

John Cleese is amusing in his few scenes but I found his presence to be a bit distracting. A western, especially one that isn't a comedy, is the last place I would picture him as an actor. Although the focus stays mostly on the male characters there are two female roles worth mentioning. I agree with Eric that Linda Hunt is a standout as Stella, the saloon owner with a heart of gold. The other is Lynn Whitfield as Mal's sister Rae. She gets in on the action when she stabs one of the bad guys. You almost never saw black characters in those classic westerns, and even then only as hired help in very small roles. Kasdan didn't include Native Americans in this movie but his treatment of the black characters here is the one aspect of Silverado that's in any way revisionist.

Visually Silverado paints a breathtakingly beautiful portrait of the Old West. It doesn't add anything new to the genre, instead it's content being a fond tribute to all those classic westerns of yesteryear.