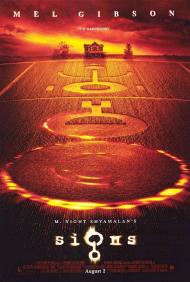 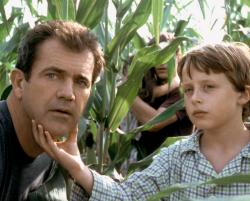 The true testament to a great movie is whether or not it causes an emotional response. Did the movie make you laugh or cry? Did you feel for the characters? Did you share in their fears and hope? All the answers are yes if the movie in question is Signs.

This is an absolutely great film! It is a haunting science fiction thriller. It is a family drama. It is a movie about rediscovering your faith. It also had some scenes that had me laughing out loud.

Mel Gibson made a name for himself playing slightly crazy action heroes like in Mad Max and Lethal Weapon. I think his best work has been more recent. Ransom, The Patriot and now Signs show that he is far more than a pretty face. Note that in all three of these movies he plays a father. A role he plays daily in real life.

Mel stars as a single father of 2. His wife died in a car crash that left him emotionally scarred. He was a reverend but left the church when his wife died.

The movie starts right off with the discovery of some crop circles on the family farm. Then they chase shadows and hear noises. The movie moves along at a quick pace and before you know it Aliens have attacked Earth. Now where as Independence Day was a big war movie with space ships and battles, this movie is scaled down to an incredibly personal level. This movie is about this one family and how these events affect them. In fact a good 75% of the movie takes place on their farm.

The science fiction part of the movie provides the suspense, but the movie has much deeper levels. Mel's character has left the church because he lost his faith in God. The appearance of the aliens at first seem to only confirm his disbelief. However, through the events of the movie, most quite emotional, he comes to learn that he really does believe.

Joaquin Phoenix nearly stole Gladiator from the over rated Russell Crowe. Here he is again very good. He plays the younger brother who moved in after his sister in law died. His character is the smaller role but he does good things with it. He is a very effective actor. I felt I knew his character so well, and most of that is due to his acting, since his characters background is only modestly covered.

The brilliance of this movie goes to the M. Night Shyamalan. He wrote, produced, directed and even has a small part in this movie. What I always like about this guys movies is that they are not predictable. Okay, sure, I was guessing that Mel's faith would be restored but I had no idea where he was going with this alien angle. His movies are a breath of fresh cinema air. 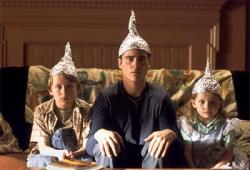 I think Eric and I saw two different movies.  For him, it was all about the emotional impact of the movie and the suspense and action came second.  That would be fine if there was any emotional impact to this overly melo-dramatic story.  Any impact it does have is weakened by the poor dialogue and drabness of the performances and tone.

What did work for me was the suspense and thrills which this movie provides.  There are several jump out of your seat moments and the suspense builds slowly, with only hints of the aliens and glimpses right up until the end.

What also worked for me was the humor which is slipped in here and there and which I give credit to (whether rightly or wrongly) to the presence of Mel Gibson.  As M. Night Shyamalan proved in The Sixth Sense and Unbreakable, he makes movies with a very serious, depressing tone to them.  In The Sixth Sense this worked.  In Unbreakable, it did not.  In Signs the movie contains the same tone, but has moments of humor interjected into it.  But take the female sheriff character, she of the melo-dramatic pronouncements, and the flashbacks to the night Mel's wife died.

Another annoying thing about this movie is the way flashbacks are thrown in of events that took place earlier in the movie, as if, we the audience, were incapable of remembering something that happened 30 minutes ago.  During a confrontation with one of the aliens, Mel cuts off two of its fingers.  Later, the same alien shows up and we are presented with a close up of the two fingers and then a flashback to when they were cut off, just so we get the point.  The fact that this flashback takes place in the middle of the movie's climax is even more irritating.  And during the moment of Mel's faith re-emerging, we again are treated to another flashback to one of the most melo-dramatic groan inducing moments of the movie.  "Swing Away!"  Puh-leaze!

And without trying to give away the ending of the movie, lets just say that the method by which the aliens are defeated is laughably implausible, as to be completely ridiculous.  With this weakness of theirs, there is no way, these aliens would ever have come to the Earth.  Oh, and the signs themselves?  Apparently they are to mark certain spots on the ground so the alien's ships know where to go.  See, they have spaceships which can cross the vastness of space and cloak themselves so they can't be seen, but they need marks on the ground so they'll know where to go.  I mean forget radar and scanners and global positioning, just look for the pattern in the field.

Some good moments of suspense and humor, Signs is bogged down by a depressing and unbelievable back story which I couldn't care less about. 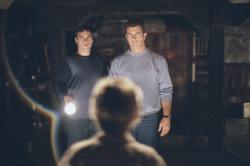 Eric is right on this one. I thoroughly enjoyed this movie. I found myself completely drawn into the story and world created by my new favorite film-maker M. Night Shyamalan. He is a master at taking what seem like insignificant details and turning them into emotionally engrossing and thought provoking plot twists. He's like Spielberg only with good endings.

Like Scott I can be turned off by far fetched plot devices. The movie Reign of Fire is full of them. However I disagree with Scott's arguments against Signs. He claims that because of the aliens weakness in regards to our physical environment they never would have come to Earth. However they did not come here to take over, but simply to capture humans to take back and 'harvest'. As for his statement about the ridiculousness of the crop designs themselves I assumed they contained information about specific people the aliens were interested in, such as the son.

Signs has it all. Heart-thumping moments, laughs and characters to root for. I even enjoyed Mel Gibson in this role. I only hope this movie is a sign of things to come.