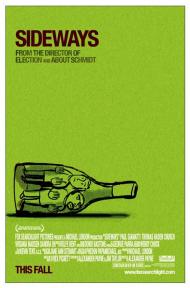 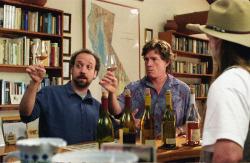 You know how most movies feature unbelievably beautiful people pretending to be ordinary people? And you know how those beautiful people do fantastic thing in exotic locations? Even in the so-called human dramas, the actors are in great shape and the women are more made up and gorgeous than you normally see in real life. Well, if you ever wanted to see a movie with the most ordinary looking actors doing the most mundane and normal things, then Sideways is the movie for you.

Paul Giamatti -- quite possibly the least attractive actor working today -- stars as Miles, a depressed middle-school English teacher/wannabe novelist. The week before his best friend's wedding, Miles decides to take the groom to be on a trip through the California wine country. It is their experiences over the weeklong trip that make up the bulk of the movie.

One thing that this movie taught me is that wine-aficionado's are as obsessively geeky in their adoration of the grape as any sci-fi fan is over the actors behind their favorite television show or sports fans are about their team. The only difference is that the wine drinker is more pretentious. As I watched the first half of this movie and kept hearing Miles' comments on the various grapes and the proper way of enjoying a glass of wine, I couldn't help but think, it's just wine! Drink it for god's sake and be done with it. Although quite obviously some of the wine talk is meant to be symbolic of life.

The main action of the film and most of the humor comes from Miles and his friend Jack's attempts to seduce two women. While Miles actually falls in love with the woman he is pursuing, Jack is only interested in one last fling before his marriage. He has a quick and sexual relationship with a woman he meets in a winery, although he keeps it a secret from her that he's about to be married, a decision that has consequences for both him and Miles.

The other thing that this movie taught me is that there's a reason most movies aren't about mundane matters and ordinary people. If we want to see those things, all we have to do is look at our own lives. From the movies, I look forward to being taken out of the ordinary. Because of that and the fact that I really didn't care what happened to either of the two fairly annoying main characters, this movie never drew me in and was never anything more than mildly amusing. 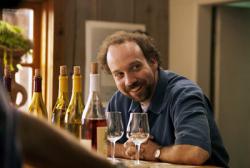 Yes, it is amusing. "I am not drinking any fucking Merlot!" Miles yells at Jack before entering a restaurant. In another scene, Miles goes into great detail showing Jack how to judge and taste wine. He then looks at Jack and says, "Are you chewing gum?"

Scott wrote that "some of the wine talk is meant to be symbolic of life." It is very symbolic of Miles and Jack's life. Miles describes one batch of wine as, "...rancid tar and turpentine bullshit." Jack says, "Tastes pretty good to me." Miles is very picky about his wine as he is about his women. He is still in love with his ex and cannot get up the nerve to make a play for a woman who obviously likes him. Jack likes all wines and does not care about the details. He also likes all women and does not care about the details. He is marrying a rich Armenian. He has a fling with a single mother, Asian. He has a one night stand with an over weight married waitress. You could say that Miles likes an exotic, full bodied wine where as Jack likes women who are exotic or full bodied.

The best thing about this movie is the symbolism. Every time Miles chooses a vineyard, to sample wine, it is a very nice quiet place. The one time Jack chooses one, it is full of tourist and souvenirs. Mile's novel is long. Jack acts in quicky commercials. Miles life is about the long haul. Jack's is about the moment.

Sideways is a well directed movie that works far better as a drama than a comedy. When Jack runs into the hotel room naked and Miles laughs I realized just how much I came to like these guys. Miles finally laughs and Jack finally shows he has weaknesses. 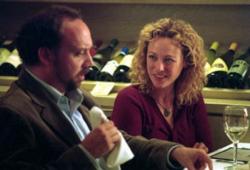 Normally I agree with Scott about wanting movies to be larger than life. As a fan of classic black and white movies I love glamour and intrigue. And as shallow as this may sound I don't enjoy watching unattractive people in close-up for two hours. To be fair I saw this movie on the small screen and perhaps that made it a bit easier to take Paul Giamatti's dog of a face and sagging body. But unlike his fellow looks-challenged actor William H. Macy, Giamatti is a very talented actor. So much so that I began to really care about this guy Miles.

He and Jack represent the two sides of man. Jack is alpha male, optimistic, full of energy and is led around by his libido. Miles is introspective and cerebral and quite lazy. He is also unsure of himself around women.

The friendship between them makes the movie work. It makes sense that they met in college as freshman year roommates. It is unlikely that these two very different people would have become friends in any other situation. But the fact that they are opposites is why they get along. Miles is in awe of Jack's confidence and ability to relish life to the fullest. Jack, meanwhile, is in awe of Miles intelligence and stability.

OK, some of the praise heaped on Sideways may have been a bit extreme, but it is well written and acted. Since the movie is all about the symbolic personalities of these two middle aged guys, I guess your enjoyment of it boils down to whether or not you like and/or identify with them. Like Eric, I found myself really enjoying their company.