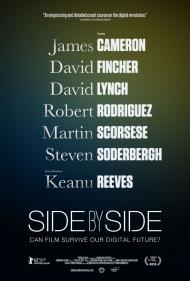 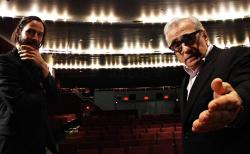 Keanu Reeves and Martin Scorsese in Side By Side.

Side By Side is an American documentary film directed by Christopher Kenneally and produced by Justin Szlasa and Keanu Reeves. The big question it raises is whether or not film (meaning celluloid - not the art form known as The Movies) is dead. Today (with a few notable exceptions) most filmmakers use digital cameras. It took a while but the quality of the images captured digitally has finally reached a level that equals -or some would say surpasses- that of film.

Through interviews with famous directors, and lesser known film technicians, the history and work processes (both pro and con) of each technology is discussed and compared. To some, film has a more layered and textured look that captures the light a certain way. Others favor the immediacy of modern technology. With film you have to wait for the rushes to be developed to see what you have shot thus far, whereas with digital cameras you can watch it back instantly. As Keanu Reeves says, “They're no longer dailies, they're immediatelies.”

The movie is done in a style where the two sides of the debate are discussed back and forth. It's interesting seeing which directors cling to film while which others embrace the only constant thing in life; change - whole heartedly. George Lucas, not surprisingly, is in the latter category. As he rather eloquently states, “Film is a 19th century invention. We are at the top of the photochemical process. This is about as far as it's ever going to go.” It's true that there are many things visually you can do digitally that you could never achieve with film.

Martin Scorsese (he's in the other camp) worries, “My big concern is of the image, ultimately with CGI, I don't know if our younger generation is believing anything anymore on screen, it's not real.” But then, as Keanu Reeves later points out, movies were never really “real” anyway.

The director of photography's job has changed the most. It used to be a position of power. The one person on the set that actually knew what the finished movie would look like. It was an art form filled with well guarded trade secrets. Today everything they do is being monitored and can be immediately questioned or altered. The shot product is then digitally altered in many ways. The colors can be adjusted or changed in any way, objects can be inserted or deleted, made larger or smaller etc. The possibilities are endless.

One big concern is preservation. It is pointed out that film is unique in that it is both a capture medium and a storage medium. If stored properly it will last perhaps hundreds of years. All you need is a light to shine through it and a flat projection space. According to Martin Scorsese, “The only way you can make sure that a film or anything on the moving image is going to be around sixty or seventy years from now, interestingly enough, ironically enough, is celluloid.” Christopher Nolan adds, “There are no archival formats worth anything in the digital realm that you would put any stock in.” George Lucas isn't worried. I'll give him the last word, “There's too much digital information out there not to figure out a fool proof way to store it forever.”

Whatever your feelings about film versus digital movies, one thing is for certain. Digital is here to stay. Although there will always remain, at least I hope, a few purists working in the old medium. In fact I don't think the day is too distant when we will see a new Oscar category: Best Celluloid Picture. Side By Side takes a thought provoking look at the state of movie technology. It's thoroughly engrossing and a must see for film buffs.