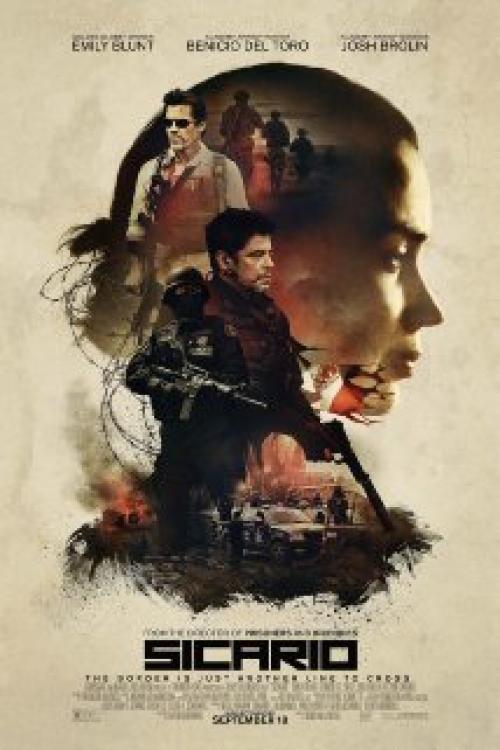 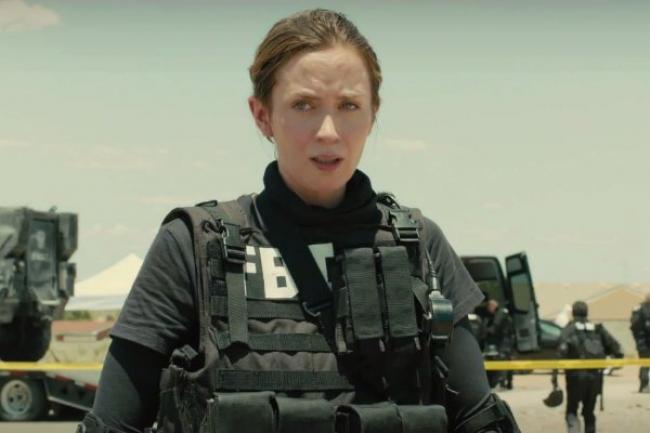 Sicario is a taut and dramatic thriller that deals in shades of grey. It features a cast of talented actors, a well written story, and atmospheric direction.

Emily Blunt stars as FBI Agent Kate Mercer. She is working against the drug trade on the American side of the Mexican border with some success, but little actual results. She jumps at the opportunity to join a new cross-departmental task force despite being unsure of exactly which other departments are involved in the new operation. Josh Brolin plays Matt Garver, the man who recruits Kate to the group. He's shady on details, but has access far beyond Kate's. Aiding Garver is the even shadier Alejandro (Del Toro), who Kate suspects is with the CIA.

Their first mission is to escort a drug dealer out of Mexico in the first of several tense scenes. Director Denis Villeneuve knows how to build suspense and a sense of danger. At first his pacing seems slow, but layer upon layer the atmosphere builds, helped by a moody soundtrack. We are introduced to the dark and dangerous world of this movie through Kate's eyes. We feel her tension and her fear as she sweats through the car ride toward the border. By the time the bullets start flying it almost feels like a relief.

Kate soon finds herself out of her depth. Matt and Alejandro clearly have an agenda that they're not sharing with her. Her follow the rules mentality is put to the test. Although she questions her presence on the team it isn't until the third act that the real reason she's been included is revealed. She and the audience are left in the dark through most of the story, which only adds to the already thick tension.

The cast is uniformly terrific. Blunt anchors the film as Kate. She manages the trick of being both tough and vulnerable at the same time. She's clearly good at her job and no concession is made for her being a female. Emotionally though, she is clearly not as tough as her exterior. Her personal life is non-existent and her need for human companionship almost turns deadly. Blunt is impressive throughout. Brolin plays his part equally well. For the most part his Garver remains a mystery. We learn little about him except that he's willing to do whatever it takes to do his job and he seems to enjoy doing it. He's charismatic and a little slimy alternately. Del Toro is a scene stealer as the deadly Alejandro. He has a dark past and a greater personal stake in the outcome of the events depicted. Despite the least amount of dialogue of the three stars, he doesn't let this prevent him from making a lasting impact.

As I mentioned, the pacing at times is slow, but it's quite effective at creating atmosphere. Only the scenes of the Mexican cop at home needed to be trimmed. These scenes give a human face to the nameless people affected by the drug trade, but they aren't needed for this story. The don't truly detract from the overall film, but neither would it have harmed the story if they had been cut.

Even if the weather seems reluctant to turn summer into autumn, it's a sure sign of the changing of the seasons that such a grown-up thriller is entering theaters. It's an action movie with depth set in the real world. It's nice to know Hollywood still knows how to make something besides superhero movies. 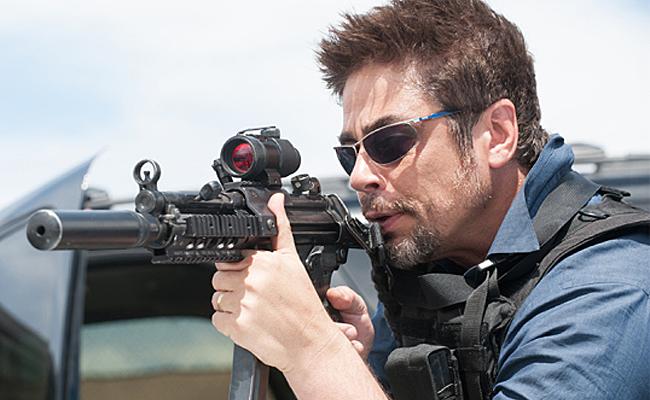 Sicario (Spanish for Hitman) is taut as a high wire and pulls no punches. The violence in this world is merciless. I agree about the masterful direction that so carefully constructs its story. There's nothing glamorous about the violence in Sicario. Villeneuve recreates realistic carnage without a trace of your typical over-the-top Hollywood embellishment.

The opening sequence establishes the character of Kate. We see her in action leading a raid on a drug house. She's clearly good at her job and someone you want around in a crisis. Because we've seen how calm and assure of herself she is under pressure, it packs a bigger wallop when we see her get in over her head as she tags along on several raids across the border. We watch her experience the front lines of the Mexican Drug War. Her eyes get abruptly opened and she realizes just how naive she has been.

From here the movie grows even more tense and brutally violent. The body count starts to pile up. The Mexican police officer (Maximiliano Hernández) that Scott mentioned is there to put a human face on the casualties of this war. These scenes didn't bother me. They don't seriously slow down the movie and they add another layer of tragedy to the story.

As Scott wrote, the acting is all-around terrific. Blunt commits to the role with Streep-like dedication. Brolin has perfected the art of the smirk and the knowing glance or shrug. Del Toro is truly scary as Alejandro. Hernández makes the most of his small role. He's particularly affecting in his final scene.

Denis Villeneuve has crafted an adult thriller set in the real world about a war currently going on at the southern border of the United States. 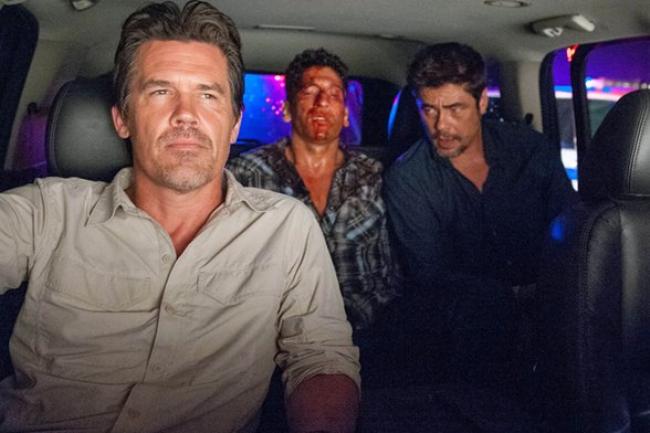 As he did with Prisoners (2013), Denis Villeneuve takes us on a journey where we witness violence and explore the morality of whether or not a violent end justifies a violent means. There are innocent victims in this film but most of who gets killed are criminals on some level. Kate represents good, wanting to follow the letter of the law. Matt is in the middle as he does whatever is necessary to help in the big picture, following only the laws he is held to. Alejandro is without a heart, as it has been figuratively removed. He has a goal in mind and will kill any person, no matter how innocent, to see it accomplished. Yeah, that could be described as evil.

I agree with Scott, the scenes with the Juarez police officer and his son were not needed. Alejandro’s eventual backstory puts a personal touch on this drug war. It would have worked however, had we seen the Mexican police officer’s story mirrored by a Texas police officer and his child, who are dealing with the illegal drug smuggling on the United States side of the border. As it is, it seems that Villeneuve intends for us to feel sympathy for the citizens of Juarez but are given no reason to pity the good people of Texas and Arizona, who constantly deal with illegal drugs brought into and through their communities from Mexico.

Villeneuve is quoted as saying, “I hate violence, and I think that violence is meaningful if you see the impact of violence on victims. I'm interested on the impact. I'm not interested in the show. I don't want to make a show of violence. I mean, I've been in contact with people who suffered from the trauma of war... When I use violence in a movie it's just to express the power, the impact of it.”

That may be so but it is the violence in this film that causes you to react. As my brothers wrote, these are not scenes of glorified action violence. These are moments of realistically portrayed disturbances that end with blood and death.

The cast is never portrayed as Hollywood stars. Brolin briefly shows us his less than toned stomach. Blunt wears minimal makeup and someone even comments on her poor hygiene. This film presents a real world where life and death decisions are common place.

Violence is not only meaningful if you see the impact on the victims. It can be meaningful if the death happens to someone who spreads misery and death themselves. Sometimes an eye for an eye is justified, sometimes not. It is up to the individual to decide.

Sicario presents us with the moral question of when is violence acceptable and when does it stop. It, of course, never gives us an answer as there is not one. Violence more often happens because of an emotional reaction than a logical thought process. I think the last scene plays out brilliantly in that it technically asks the audience what side are they on. Do you follow the laws because they are laws or are their times when the law must be broken for the greater good.