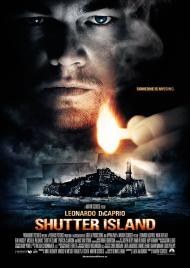 Since Shutter Island's release date was pushed from last fall to the cinematic release date graveyard of February I naturally assumed that it was being dumped because it wasn't very good. Turns out however, that whatever the reasons for moving it, it certainly wasn't because it was bad. It's not a perfect movie, but it is pretty damn good.

Like any movie with a twist ending it's difficult to discuss the plot in a review without giving anything anyway. Leo plays Teddy Daniels, a U.S. Marshall sent to a mental institute for the criminally insane on Shutter Island to investigate a missing patient in the 1950s. Teddy was a decorated soldier in World War II and was present at the liberation of Dachau; an event which still haunts him in the present through his dreams. He also has a more personal troubled past that is revealed throughout the film. Teddy's investigation is hampered by a hurricane that strikes the island and an oddly uncooperative hospital staff. Very quickly both he and the audience begin to suspect that there is something much more sinister going on than just a missing person.

It's partly because of all the M. Night Shyamalan conditioning, but it's much more difficult to sneak a twist past an audience these days and that there is a twist coming in this movie is pretty well telegraphed. The real test of a twist ending though is whether or not when it's revealed everything in the movie falls neatly into place or if it just makes you think, "No fucking way!" In this the ending ties things together quite neatly and in fact has made me want to see it again to see things from the new perspective that the ending provides.

The look of the film is filled alternately with beautiful and ugly imagery and often in rapid succession. Teddy's dreams and memories are good examples of that. Occasionally however you can see the strings being pulled in some scenes and it's obvious when the actors are working against a green screen.

Leo, who has grown on me as an actor, holds the movie together amongst all the mysterious goings-on. He's the reason you care about the mystery of Shutter Island and he gives the movie the emotional impact of its ending. Although there are supporting actors, the story is told entirely from Teddy's point of view and Leo is in every scene. Leo has done some of his best work under Marty's direction and I suspect this won't be their last collaboration.

At over 2 and a quarter hours the movie does run a bit long. It could have been edited more tightly to help the pacing which lags a bit in the middle.

Although the change of dates certainly damaged Shutter Island's chances of award's glory, it's actually kind of nice to find a good movie being released in the middle of February. It certainly makes for a change anyway. 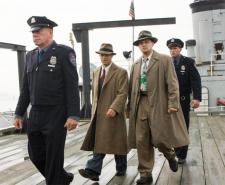 Chuck and Teddy arrive on Shutter Island to figure things out.

I suspected the twist, very early on in the movie. Scorsese is so careful to make the twist plausible, that it almost makes it completely obvious. Scott, I think the green screen scene was intentional. Later in the movie we are told something about that part, so it makes sense that it was filmed that way. Although the twist was not hard to guess, I was still entertained , and anxious to see the outcome. Daniel's history was shocking and I never saw that coming.

The setting is very key to this film. The isolated island containing rocky cliffs and a thick forest. The imposing buildings of the psych wards and the doctors elegant mansion. The manicured gardens and the lighthouse on the rocks. The whole place has the feel that anything could happen there, good or bad.

Although Di Caprio is in every scene and carries the film, this is definitely Scorsese's movie. He creates a unsettling atmosphere, and has you looking around every corner. He gives you clues and hints. Some are obvious and others are obscure. It is a fun film to watch. I felt very engaged in this movie as I was trying to piece it all together.

Scorsese tends to be long winded. Almost all of his films could use a trim. It is as if he has so many ideas and wants to fit them all in. He does however, have a great feel for narration. He carefully guides the audience through the story, and ties all the pieces neatly together. In the hands of a less masterful film maker, this movie could have very easily fallen apart.

The test of any good mystery is whether or not it draws in the audience. Shutter Island offers a textbook example of how to properly achieve this. Scorsese proves himself, yet again, to be a masterful filmmaker. And I agree that DiCaprio does splendid work. It is one of his most intensely emotional performances.

Except for a few brief flashbacks, and the beginning of the movie on the ferry, the entire story takes place on Shutter Island. It gives the movie a claustrophobic feeling that serves the plot well. The island itself is very Hitchcockian. The architecture of the buildings, the surrounding woods, the seaside cliffs and the gothic lighthouse all contribute to the eerily intriguing atmosphere. The hurricane creates that classic “dark and stormy night” set-up.

Like Eric, I guessed the twist. It doesn’t spoil the movie since the details aren’t revealed until the end in a scene where DiCaprio really shines as an actor. He certainly deserved more recognition than he received for this role.

Shutter Island is filled with sinister acting characters and disturbing images. Of course everything isn’t as it seems. The story unfolds beautifully. The fact that I didn’t even notice the two hour plus running time is a testament to that.

Of the supporting cast Jackie Earle Haley and Patricia Clarkson get the two best scenes. They both add to Daniels’ growing paranoia. Haley, as inmate George Noyce, tells him, “This is a game. All of this is for you. You're not investigating anything. You're a fucking rat in a maze.” While Clarkson, in the scene that first tips its hat to what is actually going on, warns him, “The only way off the island is the ferry, and they control it. You'll never leave here.”

In this there fourth movie together, Martin Scorsese and Leonardo DiCaprio prove themselves to be a modern day Alfred Hitchcock and Cary Grant. I can’t wait to see what they do next