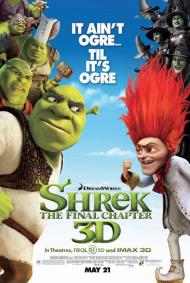 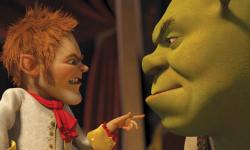 Rumpelstiltskin and Shrek face off in Shrek Forever After

After the disappointing Shrek the Third, I really thought we'd heard the last from the giant green ogre and his assortment of fractured fairy tale companions. Clearly though, where green is concerned Hollywood is never done and Shrek, Donkey, Fiona and the rest of the wacky inhabitants of the Kingdom of Far, Far, Far Away are back for a curtain call. And while this installment is a step up from the previous film, it doesn't approach the first two Shreks in terms of originality or charm.

Playing out like a fairy tale version of It's a Wonderful Life, Shrek For Ever After shows Shrek what life would be like if he'd never been born and gives him a new appreciation for the life he's leading.

Most fairy tales end with true love's first kiss (as the original Shrek did). Shrek For Ever After shows what happens after the kiss and the prince and princess get married, have kids and settle into the humdrum routine of everyday life. Shrek misses his days of bachelorhood freedom when people were scared of him and he was free of responsibilities. Enter Rumpelstiltskin who offers Shrek a day of freedom in exchange for a day from Shrek's childhood. Turns out that the deal is rigged and the day Rumpelstiltskin takes is the day Shrek was born. This means that Shrek only has the one day to get out of the deal otherwise he will cease to exist at the end of it.

Overall the tone of the film is a little darker than the earlier films. The modern pop culture references and spoofs that littered previous installments are mostly absent here, mainly limited to a few songs. Most of the jokes come from the differences between the "real" world and the one Shrek finds himself in. An overweight Puss in Boots provides the biggest laughs, even though the twist involving his character has already been revealed in the trailers.

The biggest disappointment for me is limited screentime given to the minor characters. To me the heart of the film has always been Shrek's relationship with Donkey and their scenes together are much reduced here. Gingerbread Man, Pinocchio and the other oddball inhabitants are often the funniest characters and they do all get a few moments here, but not enough.

Although I did enjoy this movie, it really feels as though the creative team has run out of ideas. I mean, instead of moving on to new things, the plot is basically just what might have happened if the events of the first film had gone a different way.

Following the trend of late, this movie is being shown in 3-D. While some of the scenes are pretty cool because of this, it doesn't make the movie any more entertaining or funny; just more interesting to look at.

Reportedly this is to be the final Shrek film. Plans for a fifth film have been scrapped. As much as I enjoyed the early films and these characters, I have to say that's probably the right decision. 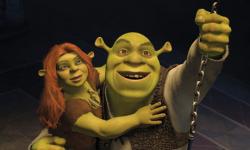 Fiona and Shrek in Shrek Forever After.

Shrek Forever After should have been called Shrek 4: Beating a Dead Horse. There is nothing inspiring or original to be found. The whole thing seems like a waste of time. Whoever sat in the pitch meeting and green lit this plot should be fired.

Shrek is tired of his demanding life as a celebrity father. The wife and kids run him ragged. He yearns for his carefree single days. With the stroke of a pen, and some magic ink, he gets to have a carefree day in exchange for one day from his childhood. Things do not goes as he would like and he ends up in a world where Rumplestilskin is King and Fiona is leading a rebellion against him. In this world he never met Fiona, or Donkey or any of his other friends. Shrek discovers that if he can get Fiona to fall in love with him and give him love’s true kiss, he can reverse the magic and set everything back to normal.

In other words, this is one of those stupid, annoying plots that only exists inside one character’s head. Of course we know Shrek will succeed, and when he does nothing is any different, save Shrek appreciating what he has. George Bailey he is not. We already know these characters. Why do we have to see Shrek meet them all over again? It is no funnier this time around. With all the fairy tales, in all the world, this is the best story they could come up with?

Directed by Mike Mitchell, who gave us such classics as Surviving Christmas (2004) and Deuce Bugalow: Male Gigolo (1999). It was written by Josh Klausner, who wrote some of Shrek The Third, which began the downfall of the Shrek series. Did the money men behind this movie even care if it was good?

The plot is pointless and the dialogue is groan inducing. “Man, you are a cat-tastrophe.” Donkey says to Puss, who responds, “And you, are ri-donk-ulous.” Just in case you did not realize that was intended to be a joke, both characters give you a clue by then breaking into laughter.

The movie starts with Shrek being unhappy with his life. It ends with him in the same place. So the message is that no matter how bad your life is, just suck it up because it could always be worse. Not exactly a happily ever after ending.

Donkey, Shrek and Fiona in Shrek Forever After.

I’m somewhere in between my brothers on this one. This Shrek is slightly better than the third movie, but only slightly. The plot continues the themes of that movie, Shrek wanting a break from his routine life of parental and husbandly responsibilities and female power as envisioned by Fiona as a revolutionary warrior.

Eric, the example of bad dialogue you mention between Donkey and Puss was actually a moment I was planning on mentioning as a high point. In this world Donkey and Puss have never met and this scene demonstrates beautifully why they are such great friends. In an instant they “get” each other and were meant to be friends whatever the time or place. It isn’t funny because of the actual words but because of their shared reaction.

Shrek Forever After is more action oriented than any of the previous green ogre installments. The wicked witches add to the fun. And once again several pop songs are used to good effect. The Carpenters “Top of the World” is played while a carefree Shrek wanders around the countryside scaring the pants off innocent villagers and The Pied Piper makes the ogres dance by playing that old disco nugget “Shake Your Groove Thing”.

There are some laughs to be found. I cracked up at the way the fat kid at the party kept incessantly telling Shrek to “Do the roar!” In my review for Shrek the Third I questioned if I was the only one disturbed by the dragon/donkey hybrid children. Apparently I wasn’t as they address the issue here by having Donkey ask Shrek, “Are my kids cute or do they make people uncomfortable?”

I agree with Scott that it’s probably a good thing they scrapped plans for a fifth movie. On the contrary Eric, it ends with a heartfelt Happily Ever After when Shrek and Fiona share the following dialogue… Shrek: “You know, I always thought I'd rescued you from the Dragon's Keep.” Fiona: “You did.” Shrek: “No. It was you who rescued me.” 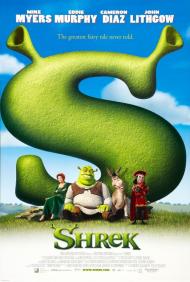 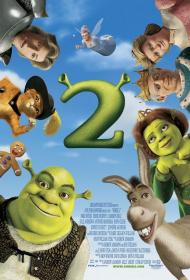 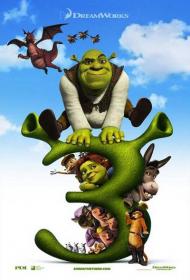