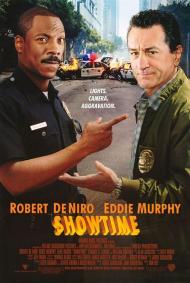 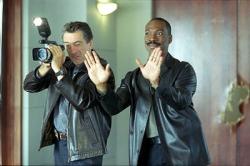 Despite the been-there-done-that buddy cop storyline Showtime is highly entertaining cinema due entirely to the talents of the two leads. Eddie Murphy is simply at the peak of his game. Robert De Niro adds to the recent niche he has carved out for himself as a comic actor and although the script is nowhere near as good as Analyze This or Meet The Parents it is with Murphy that he has the greatest chemistry.

The rather silly plot centers around a reality television series built around a very reluctant police detective played by De Niro and a very ambitious and hammy beat cop played by Murphy as his sidekick. Rene Russo is the producer and William Shatner makes an appearance playing himself directing their show in one of the movies funniest bits. But it is the interaction between the two stars that makes the ride fun. Murphy brings out De Niro's goofy side to a degree not seen before and he repays the favor by giving Eddie the perfect straight man to bounce off. At any rate it works.

I only hope these two titans of the silver screen get together again only next time with a script worthy of their talent. 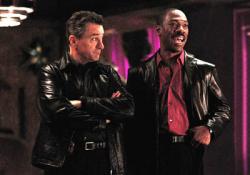 I agree with Patrick completely that it is the chemistry between the two leads that make this movie so funny. But then as Patrick mentioned, DeNiro has been down this road before. He is such a potent and serious figure, a legend in American Cinema, that simply by appearing against a comedian seems in itself funny. Billy Crystal, Ben Stiller, and now Eddie Murphy, have all appeared opposite him to good effect. The question is, how long can just him appearing in a comedy, seem funny? Well, the answer is, at least through this movie.

And perhaps since this is a comedy, and he's playing against a comedian, it should be no surprise that for one of the few times in his career, DeNiro is outshone by a co-star, because Murphy's character dominates this movie. His cop who wants to be a movie star, has all the best lines, all the funnies moments, and nearly steals every scene he's in. Murphy, who disappeared from the limelight for a few years a while back, recently has had something of a resurgence. Besides the so-so Dr. Dolittle movies, he has appeared in Bowfinger, and now Showtime, two noteworthy and very funny roles.

As Patrick also mentioned, the plot of this movie is pretty thin. The buddy cop genre has about had it. What would have been a more clever plot, might have been if instead of casting a reality Television show, the producers had been casting a buddy movie themselves. Then they could have spoofed the genre itself, instead of adding to the already long list of cop buddy pictures.

But forget the plot, what little there is, and just enjoy watching Murphy and DeNiro together on the screen. And if those two aren't enough, you get a hilarious sequence with William Shatner, showing the two cops how to be TV cops, ala T.J. Hooker. That scene alone is worth the price of a ticket. 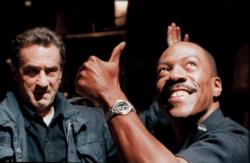 I could not disagree more with Patrick and Scott if I tried. There is absolutely no chemistry between Murphy and DeNiro in Showtime. None!  Niente! Zero! Ain't there! Doesn't happen! The chemistry DeNiro had with Ben Stiller and Billy Crystal was there due to their reaction to him, or at least to his characters. Their characters were nervous and uneasy around him. Murphy's character does very little reacting to him at all. Murphy's character is an annoying over actor looking for his big break. From that motivation comes Murphy's biggest laughs, what there are of them. None of his laughs come from banter with DeNiro.

I am a big fan of both of these actors. Individually they are both extremely talented. Together they seem to just go through the motions without actually reacting to the others acting. The usual setup for a joke between them goes like this; Murphy does something he thinks is valid only to have DeNiro point out that it wasn't. In one scene Murphy picks up a water bottle at a crime scene and demands that someone dust it for prints. A Lt at the scene asks for her water back saying she hasn't finished drinking it yet. Cut to DeNiro's smirk and unfunny comment.

This movie could have been great with these two talented actors.  However, this was just not a funny movie. DeNiro returns to his apartment in one scene to find hat Rene Russo has remodeled it. He objects and yells at her. Was this scene supposed to be funny? It did not advance the plot. Then there is all of the references to DeNiro's character having a pottery hobby. No joke ever comes out of it, but several scenes are dedicated to it.

This movie even throws in Johnny Cochrane in a desperate attempt at a laugh. Johnny, a word of advice; keep your acting in the court room, because you stink on the big screen.