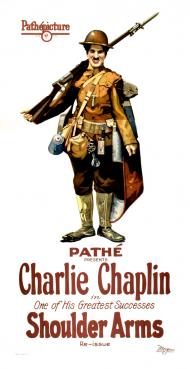 The little tramp goes to war.

Shoulder Arms was one of the first Hollywood movies set at the front lines during the first world war. It was released some 3 weeks before the Armistice was signed at the 11th hour of the 11th day of the 11th month of 1918. Cecil B. DeMille and D. W. Griffith both advised Chaplin to wait to release the movie until after the war was officially over. Chaplin reasoned that as a comedy Shoulder Arms would add to the war effort by boosting morale.

Although the final print would run just 46 minutes, Shoulder Arms was originally intended to run 5 reels (or approximately 60 minutes). Even after some opening scenes were left on the cutting room floor this was Chaplin's longest and most ambitious Little Tramp picture to date. It premiered to huge success; adding to the fame of what was already the world’s most recognized face.

The tramp is a doughboy fighting in the trenches somewhere in the French countryside. Chaplin has a few gags about the drudgery and monotony of army life. In one scene his bunker is flooded and the tramp curls up to sleep halfway underwater. He also lights a cigarette by holding it above his head and having it lit by a passing German bullet. He opens a bottle of beer the same way.

The real action kicks in when the tramp and his buddy (played by Charlies' big brother Sydney) are sent on a mission behind enemy lines. The tramp disguises himself as a tree in a scene that would be mimicked on Gilligan’s Island and many other times. The tramp almost gets caught but hides out in a bombed out farmhouse where he meets a pretty French maiden (the always reliable Edna Purviance). To make a long story short (or a short story long), the tramp winds up capturing the Kaiser himself. If you are familiar with Chaplin I’ll bet you can guess how it all ends. But I won’t give it away here.

It’s no surprise at all that American, British and French soldiers loved this movie. It gives every soldier from General to Private his greatest day dream. To defeat the enemy single handed. This is the little tramp in action and at his most heroic; not Chaplin’s funniest Little Tramp short, but certainly one of the most historically significant. 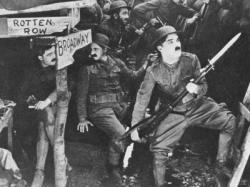 I am not sure what the first War film ever made was but Shoulder Arms has got to be one of the first Hollywood films to depict the 20th century American soldier. That alone makes this an important film. Add the presence of Charlie Chaplin and you have a classic piece of silent celluloid.

Patrick mentioned how servicemen from all over the world loved this movie. Several scenes depicted relate to every and any person who ever enlisted. In one scene Chaplin is clearly disappointed when he does not receive a letter during mail call. Another scene has Chaplin standing guard duty while he dreams of home. The best one  and likely to gain the biggest reaction from men in uniform, is when Chaplin spanks the company commander. What soldier has not wanted to hit his commander at some point?

Like Patrick, I did not find Shoulder Arms to be one Chaplin’s funniest Little Tramp shorts. The tree disguise is funny in a very juvenile way.  The funniest moment is when Chaplin explains how he captured thirteen soldiers by saying, "I surrounded them".  My favorite bits are when Chaplin tries to march with his trademark waddle. It shows the eternal struggle of the Tramp.  He is a man just wanting to fit in but will never be able to fully assimilate himself. The Tramp is the epitome of the outsider, even when in uniform. 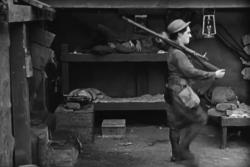 A stipulation in Chaplin's contract with Mutual Films, signed in 1916, prohibited him from leaving the country without the studio's permission. The British press criticized him at the time, saying this clause allowed him to get out of joining the British army. Two years later, he faced similar complaints when the United States joined the war, particularly when he had just signed a million dollar contract with First National. His explanation that he had tried to join the US Army, but was rejected for being underweight, calmed some, but not all of his critics. This mild controversy, which had done nothing to lessen Chaplin's popularity, was the main reason why Cecil B. DeMille cautioned Chaplin against releasing a film that poked fun of the war. Chaplin himself expressed doubts about the film, but changed his mind when, according to his biography, he screened it for Douglas Fairbanks, who roared with laughter.

The opening scenes that Chaplin filmed, but then cut from the finished movie, showed the Tramp as a henpecked husband and father who enlisted in the army to get away from his unhappy home life. Cutting it was probably a smart move since it showed a less than patriotic reason for enlisting.

Apart from the opening, when the Tramp is learning to march with his trademark waddle, the character played by Chaplin doesn't behave much like the Tramp. He's a sharpshooter who is able to capture a dozen Germans single handed and eventually even take the Kaiser himself prisoner. Of course it all turns out to be a dream, but it's still a different experience seeing the Tramp as an action star and war hero who even gets the girl.

There's not a lot of plot to this movie. It's really just a series of vignettes strung together, but most of them are at least amusing. The sequence with Chaplin disguised as the tree is the most surreal. My brothers are right when they say that it's not Chaplin's funniest or best film. Perhaps it's because he is, for most of it, an overtly heroic figure, which goes against the personality of the Tramp.

This isn't the first war film ever made. Birth of a Nation featured the American Civil War three years previously. And nations on both sides of the Great War had produced documentary propaganda films about the war. This is though, generally considered to be the first (and probably one of the very few) war comedies about World War I to ever be filmed.