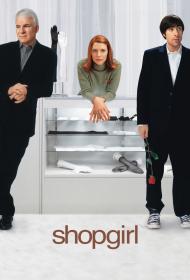 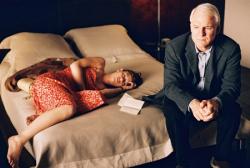 I've never read the novella Shopgirl upon which this movie is based, but I'm guessing that it made a better book than it does a movie. The opening and ending of the film features narration by Steve Martin, who both stars and wrote the movie based on his book. I'm guessing the narration is taken directly from the written page and it explains the emotions behind Clair Danes' character at the beginning and Steve Martin's at the end. Since this is a movie, shouldn't we be watching to see the emotions of these characters and not having it explained to us?

Danes stars as Mirabelle, a sales girl at Saks Fifth Avenue in L.A., although her dream is to become an artist. This in itself is a surprise, since I assumed that all shopgirls in L.A., like waitresses, were trying to become actresses. Her life is as empty as the glove department where she works. She trudges home from work to her small apartment, empty except for her cat.

It is the two men who enter her life that generate the movement in the plot. The first is Jeremy. Jeremy is young and feckless and carries all the idiocies of youth. On their first date he borrows money from her and makes a cheap pass at her. The second is Ray Porter. Ray is much older and very wealthy.

As Ray wines and dines Mirabelle, she dismisses Jeremy after sleeping with him once and he ends up taking a road trip with a rock band. Meanwhile Mirabelle has fallen in love with Ray, although to him, she's just a passing fling.

Since basically the story is a love story, it would be important for there to be chemistry between the two (or in this case, three) leads. Unfortunately, there isn't any. Apart from his money, it's never clear what Mirabelle sees in Ray. That's enough of a reason to explain why she spends time with him, but not enough to explain why she falls in love. He pays off her student loan, he flies her to New York and buys her an Armani dress, but never are there any genuine sparks between the two of them.

As for Mirabelle and Jeremy, their relationship is also hard to take seriously. Jeremy is played mainly for laughs and despite his "growth" at the end of the movie, is still pretty much the same idiot he was at the beginning of the movie. In short, neither of the two men is good enough for her.

I think Martin is a talented and funny guy, but despite having written the part, I think he is miscast as Ray. The part really calls for someone better looking, which could help explain Mirabelle's attraction to him, and also someone better able to emote onscreen. Take the final scene from The Way We Were as an example. We don't need narration to know that Robert Redford is looking at Barbra with regret and longing that is accompanied the knowledge that it could never be. Throughout the movie, Martin simply wears his one serious face.

Danes, on the other hand, does a terrific and nuanced job as Mirabelle. She outshines both her of co-stars and in her best moments, shows what this movie might have been.

Despite the movies' flaws, there is still a spark of something at its heart. Its enough of a spark to intrigue me into reading the book, but not enough to hold this movie completely together.