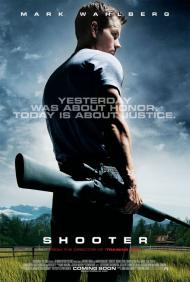 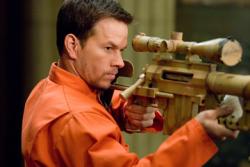 The plot of Shooter is simple enough. A former marine sniper is recruited to help stop a Presidential assassination only to realize that he is being set up to take the fall for a real assassination. He makes like Rambo and enacts revenge on those who tried to kill and frame him.

The plot of the movie is not the point or reason this movie was made. No, this movie is an indictment on The United States of America for being an evil dominant force in the world. From start to finish, this movie goes about showing that the U.S.A. is just a bunch of powerful evil men who commit any and every atrocity it wants in the name of it's own needs and desires.

In an early scene Walhberg and another marine are purposely abandoned by Army headquarters. The military in real life would never do such a careless, cold hearted thing for no apparent reason. But then this movie has its Liberal anti-America/anti-military message to push.

Then we learn that the U.S. government is behind all of the wrongdoings. Then the FBI is discovered to be corrupt and full of stupid people. Although the political affiliation of the President in this movie is never named, the movie slips in many negative lines of dialogue about the current administration. References are made about Abu Graib prison and weapons of mass destruction and that the war is only about oil.

I do not care if a movie wants to show an American as a bad guy or corrupt, but when a movie pretty much denounces an entire government, and thus it's citizens by association, it is merely a propaganda piece that is meant to insult the United States of America. These Hollywood liberals who hate America, that includes Danny Glover, need to be tried for treason. They are so quick to point out something they think America is doing wrong but are utter chicken shits when it comes to speaking bad about Muslims who cut innocent people's heads of with a hand saw or kill thousands by flying planes into buildings. Did someone in the Middle East back this film?